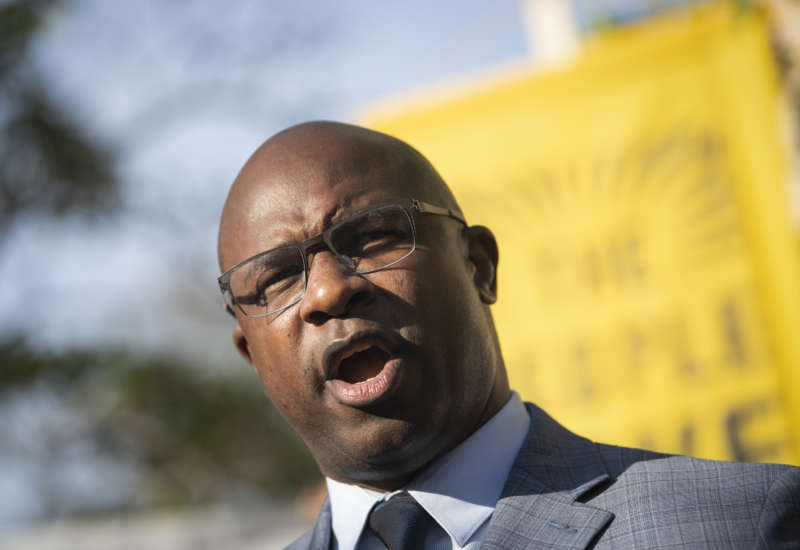 Progressive lawmakers joined Sunrise Movement activists in Washington, D.C., on Monday for a march demanding that President Joe Biden uphold his climate commitments in his infrastructure proposal and go bolder on climate and justice initiatives.

Among the lawmakers joining the protesters was Rep. Jamaal Bowman (D-New York), who delivered a powerful speech to protesters on the necessity of implementing robust climate and justice proposals in Democrats’ infrastructure proposal.

We made it clear the first time @POTUS, you’re going to hear our demands, whether we’re inside or outside of the White House. You haven’t responded.

Now we’re back to make sure you understand us clearly: It’s #NoClimateNoDeal and No Compromises, No Excuses. pic.twitter.com/JqLf1aRxAG

Bowman emphasized the importance of centering racial justice in the Democrats’ proposal, pointing out that the New Deal sidelined workers and subjugated Black communities. Now, he said, crumbling infrastructure leads to health problems and declining quality of life, especially in poorer neighborhoods.

“When the New Deal was implemented and we rebuilt America, we kept out care workers, we kept out farm workers, and we redlined Black communities. And we freaking devalued those communities just because they were Black,” Bowman said with passion. “In over 30 years, we gave over $200 billion in home loans to build the white suburbs, while Black communities were left to suffer and claw and scratch and die.”

The speech came following Biden’s many concessions toRepublicans and moderate Democrats, who have demanded that he make cut after cut to his infrastructure bill. Many climate advocates have warned that the bill is the president’s only chance at reaching vital climate and emissions goals.

In negotiations with the White House, lawmakers have removed climate proposals from the bill and have entirely excluded Biden’s American Families Plan, which contained provisions like universal paid family leave and funding for child care. Republicans have also fought against justice proposals that the president had in the original version of the bill.

What’s left of Biden’s $4 trillion plan to tackle infrastructure and the so-called caring economy is a mere $579 billion, an investment that falls far short of what experts say is needed even just for infrastructure revitalization.

“There’s another part of this that we don’t talk about often,” Bowman said. “Not only did they redline [Black people], they drafted us first for Vietnam. And then when we came back, they didn’t have no jobs for us, but they had heroin for us. They had drugs for us. And they had fucking police for us.”

Bowman encouraged the Sunrise protesters to continue to push Biden and politicians at all levels of government to fight for racial justice and climate action.

“We don’t know what the House and what the Senate and what the presidency is going to look like in ’22 and ’24,” said Ocasio-Cortez, emphasizing the need for immediate action on infrastructure and climate and echoing the protesters’ call for a Civilian Climate Corps. “What we know right now is that we have a window of opportunity.”