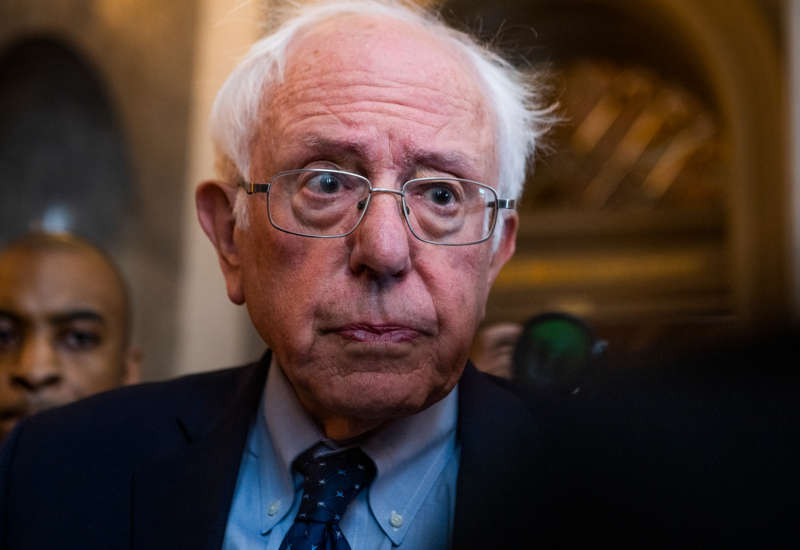 Vermont Sen. Bernie Sanders, chair of the Senate Budget Committee, said Sunday that he will not support the bipartisan infrastructure plan that the Biden White House endorsed last week if it is not paired with a broader legislative package containing major investments in climate action and other progressive priorities.

“Let me be clear: There will not be a bipartisan infrastructure deal without a reconciliation bill that substantially improves the lives of working families and combats the existential threat of climate change,” Sanders tweeted. “No reconciliation bill, no deal. We need transformative change NOW.”

Sanders’ comments came shortly after President Joe Biden walked back earlier remarks indicating he would not sign the bipartisan infrastructure legislation if it reached his desk without a reconciliation package that includes elements of his American Families Plan, a $1.8 trillion safety-net proposal that Republicans unanimously oppose.

Biden’s comments last week characterizing the bipartisan infrastructure bill and a reconciliation package as components of a “tandem” deal that cannot be separated set off a firestorm of GOP outrage, with Republicans threatening to withdraw their support from the bipartisan measure without clarification from the White House.

The president soon obliged, issuing a statement Saturday in which he said he was not “issuing a veto threat” against the $579 billion bipartisan deal, which progressives have criticized for proposing inadequate spending and pay-fors that could lead to the privatization of public assets and cuts to unemployment insurance.

“I intend to work hard to get both of them passed, because our country needs both — and I ran a winning campaign for president that promised to deliver on both,” Biden said, referring to the bipartisan bill and the reconciliation package. “No one should be surprised that that is precisely what I am doing.”

The size and scope of the reconciliation package — so named because of the arcane budget process Democrats will attempt to use to pass it without Republican support — remain unclear as senators and House members haggle over the details in public and behind closed doors.

House Speaker Nancy Pelosi (D-Calif.) vowed last week that her chamber will not take up the bipartisan infrastructure measure until the Senate also passes a reconciliation bill.

Sanders — who, as chair of the Senate’s budget panel, has significant influence over the reconciliation process — is reportedly working to assemble a $6 trillion reconciliation package that would include an expansion of Medicare and investments in green energy, among other proposals.

Rep. Jamaal Bowman (D-N.Y.), a freshman lawmaker, joined Sanders on Sunday in expressing his opposition to moving ahead with a bipartisan infrastructure package without simultaneously advancing a sweeping reconciliation bill that invests in green energy and other key areas that the bipartisan deal fails to address.

The New York Democrat is expected to join hundreds of activists with the youth-led Sunrise Movement for a protest in front of the White House on Monday.

“That’s fine if we want to have a bipartisan agreement,” Bowman said Sunday. “But it has to be coupled with an agreement that’s going to be very big, that Republicans probably are not going to agree to. But at this moment, Democrats were sent to Washington to do the work of the American people. That’s our job. And we have to push very aggressively and boldly to get that done.”

“You’re a Criminal!” Hillary Clinton Heckled by Protesters in Ireland

How Elizabeth Holmes sidelined the real scientists at Theranos