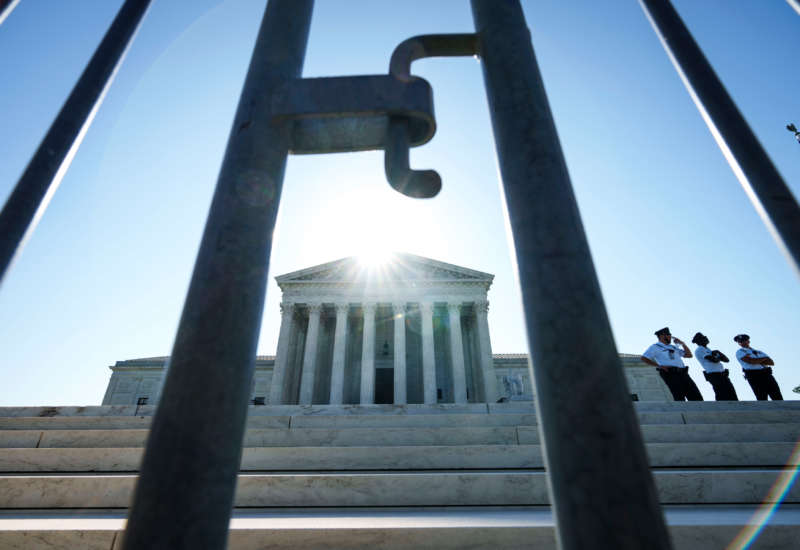 On a Friday evening in April, the Supreme Court quietly issued a short decision that opened the floodgates for religious entities to claim an exemption from just about any law. Tandon v. Newsom didn’t center on a traditionally hot-button issue like abortion or LGBTQ rights; it focused on COVID-19. While the case received little attention outside of the legal world, it marked the culmination of more than 30 years of legal strategy by Christian conservatives who have sought ever-broader leeway to flout the law. The decision could affect everything from traffic laws to racial discrimination.

During the pandemic, religious entities, often supported by influential right-wing firms like the Alliance Defending Freedom, Thomas More Society and Liberty Counsel, filed a barrage of religious objections to rules aimed at protecting people from COVID, culminating in more than 100 decisions, according to a preliminary tally by the Law, Rights, and Religion Project at Columbia Law School. In Tandon, a Bible study group in California said it should be exempt from a rule barring in-home gatherings of more than three households.

The case made its way to the Supreme Court, where the justices sided with the Bible study group 5 to 4, writing that “government regulations are not neutral and generally applicable, and therefore trigger strict scrutiny under the Free Exercise Clause, whenever they treat any comparable secular activity more favorably than religious exercise.”

Lost in the weeds was a legal bomb. The Court had, in effect, ruled that if a government made any exception to a rule — like allowing people to grocery shop in a pandemic — it had to make an exception for religious activities. In other words, the justices had elevated religion above just about every other right, including free speech and racial equality, according to a report out today by Columbia Law School’s Law, Rights and Religion Project.

“The failure of the government to grant religious objectors an exemption from nearly any law or policy now amounts to religion-based discrimination, no matter the importance of the public interest being protected by the law — even the public’s interest in staying healthy during a global pandemic,” concludes the report, titled, “We The People (of Faith): The Supremacy of Religious Rights in the Shadow of a Pandemic.” “Under this broad conception of religious liberty, policymakers could be constitutionally required to exempt religious adherents from regulations enacted to protect labor and workers’ rights, public health, civil rights, and other critical policy goals.”

The report outlines chilling examples that could result from this broad new religious power. A religious nonprofit could claim it doesn’t have to pay its workers a minimum wage, because the state’s minimum-wage law has an exemption for contract work. A religious owner of a massive corporation could refuse to hire women to positions of authority over men because a workplace anti-discrimination law has an exemption for small businesses. Religious entities have, the report concludes, won the right to exercise “discrimination on steroids.”

“Freed from the baggage of the ‘culture war,’ conservative Christian groups managed to achieve unprecedented legal wins in the COVID cases without triggering a dramatic backlash,” the authors of the report write. “One could therefore see this litigation campaign as a form of ‘COVID opportunism,’ using the pandemic as an opening to secure long-sought changes to religious liberty doctrine that will remain in effect even after the virus has subsided.”

The decision could affect everything from traffic laws to racial discrimination.

This shift toward religious exceptionalism is, in significant ways, a departure from precedent. In 1990, the Supreme Court issued a decision called Employment Division v. Smith that essentially concluded that religious entities have to follow laws that apply generally to the rest of the population, even if those laws happen to burden their religious beliefs. (That the Court sided against religious objectors in this case may have to do with the fact that it concerned members of the Native American Church who had been denied unemployment benefits after they were fired for consuming peyote in a religious ritual.) Since then, the Christian Right has been trying to do away with Smith in order to win ever-broader exemptions from laws that apply to everyone else.

The Supreme Court’s ruling in the Tandon case could, at least in theory, open the door to religious exemptions from a whole host of regulations — from gun laws, which make exemptions for security guards, to traffic laws, which make exemptions for emergency vehicles, the report notes. If it seems far-fetched to think a religious entity would claim an exemption from a law that has nothing to do with religious beliefs, remember that religious corporations and institutions have, in recent years, won broad new powers to do everything from underfund their employee pension plans, to refuse to recognize adjunct faculty unions.

“I think it’s really important to remember that the Christian Right is part of a larger conservative movement,” Elizabeth Reiner Platt, one of the report’s authors, told Truthout. “So we all know that the focus among Christian Right law firms has been on ‘culture war’ issues — making sure that marriage equality, LGBTQ anti-discrimination laws, reproductive health laws, don’t apply to conservative Christians. But we’ve also seen Christian Right firms advocating for a broader range of conservative policies.”

Platt said that the report, co-authored with Katherine Franke and Lilia Hadjiivanova, is intended to help activists, policymakers and the public prepare for the implications of the new legal regime ushered in by the Tandon case. Perhaps most chillingly, at a time when Roe v. Wade and a host of other important rights are on the chopping block, the case shows how the Supreme Court can upend decades of precedent with relatively little outcry.

The iPhone’s notch: should it stay or should it go?

Snapchat is getting an Among Us clone from Zynga