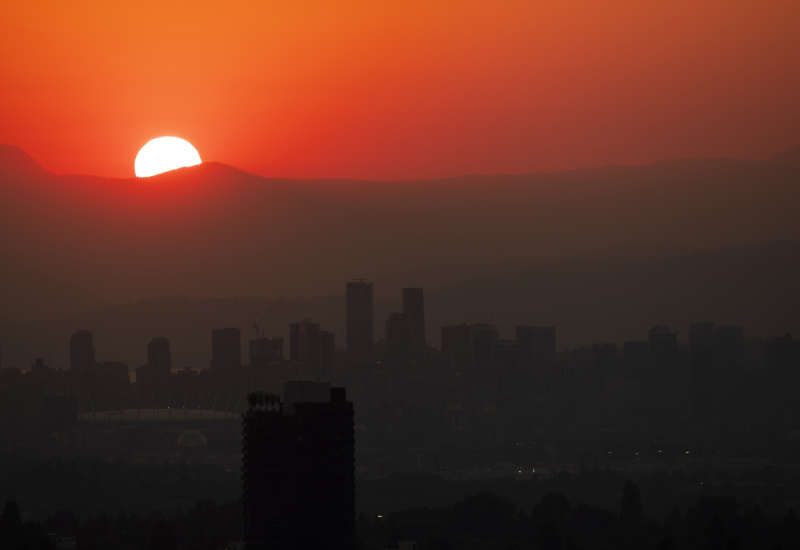 Dozens of sudden-death calls that Vancouver authorities have received this week are believed to be tied to the dangerous heatwave currently scorching Canada and pushing temperatures to record levels, an event experts say is a direct result of the human-caused climate emergency.

On Tuesday, the temperature hit 49.6°C (121°F) in Lytton, British Columbia, an all-time high and the third consecutive day that Canada heat has crushed records.

“Before this heatwave, the Canadian national heat record stood at 45°C. This record held since July 1937,” meteorologist Scott Duncan noted in a series of tweets. “Along came 27 [June] and smashed this by a whopping +1.6°C. But we were not done here, the heatwave was just getting started. The very next day, temperatures soared to a staggering 47.9°C, destroying the new record. This did not last long though…”

“And here we are,” Duncan added. “Almost 50°C at 50 degrees north. This is desert heat in Canada. We have never seen this level of heat this far north anywhere on Planet Earth until now.”

I didn’t think it was possible, not in my lifetime anyway.

This is the story of the Canadian heat record that was crushed on 3 consecutive days by an unfathomable margin of +4.6°C (+8°F).

This moment will be talked about for centuries. pic.twitter.com/Ogkn5KQKBM

Pointing to the alarming new figures, Swedish climate activist Greta Thunberg said that “heat records are usually broken by tenths of a degree — not 4.6°C.”

“We’re in a climate emergency that has never once been treated as an emergency,” Thunberg added.

As the Washington Post reported, the record 121°F temperature in Lytton “is more extreme than the all-time high in Las Vegas, 117, and higher than most places in the Lower 48 states outside the Desert Southwest.”

“These are temperatures rarely found outside of Death Valley,” meteorologist Eric Holthaus said of Canada’s record heat. “Only a handful of places in the world have ever been this hot.”

The Canada heatwave comes as large swaths of the United States — from the Pacific Northwest to the Northeast — are also experiencing devastating high temperatures. At least five deaths have been linked to the latest U.S. heatwave, which is melting power cables, cracking asphalt roads, and intensifying wildfires. More than 1,000 people in the Pacific Northwest have been hospitalized in recent days due to possible heat-related illness.

“The record-shattering extreme heat we’re experiencing is just the latest example of our climate crisis and how it’s impacting human health now,” Jeff Duchin, an officer for Public Health in Seattle and King County, Washington, said in a statement over the weekend. “Climate change is a health emergency and reducing greenhouse gas emissions is literally a matter of life and death.”

On Tuesday, police in the Vancouver area said they have responded to 25 sudden-death calls in just a 24-hour period. As the Associated Press reported, the Vancouver police department “asked the public to call 911 only for emergencies because heat-related deaths had depleted front-line resources and delayed response times.”

“Vancouver has never experienced heat like this, and sadly dozens of people are dying because of it,” Sgt. Steve Addison said in a statement. “Our officers are stretched thin, but we’re still doing everything we can to keep people safe. The vast majority of these cases are related to the heat.”

“I’ve been a police officer for 15 years,” he added, “and I’ve never experienced the volume of sudden deaths that have come in in such a short period of time.”

According to CNN, “More than 230 deaths have been reported in British Columbia since Friday as a historic heat wave brought record-high temperatures.”

“The coroner’s service normally receives about 130 death reports over a four-day period,” CNN noted. “From Friday through Monday, at least 233 deaths were reported, the chief coroner said, adding ‘this number will increase as data continues to be updated.’ Coroners are now gathering information to determine the cause and manner of deaths and whether heat played a role.”

Simon Donner, a climate scientist in the University of British Columbia’s Department of Geography, told the Vancouver Sun that the heatwave currently gripping Canada is “exactly the type of event that scientists for years have been saying are going to become more common because of putting greenhouse gases in the atmosphere.”

“We know human activity burning fossil fuels is warming the planet, and as we warm the planet it makes extreme weather events like this more common,” said Donner. “The key to the problem is the more we emit greenhouse gases the more the planet warms. That’s the basic equation.”

“So this is not the new normal,” Donner added. “Normal is going to keep changing until we stop emitting greenhouse gas emissions.”

Update: An earlier version of this story included a quote that misstated the date of the Canada heatwave. The error has been corrected.