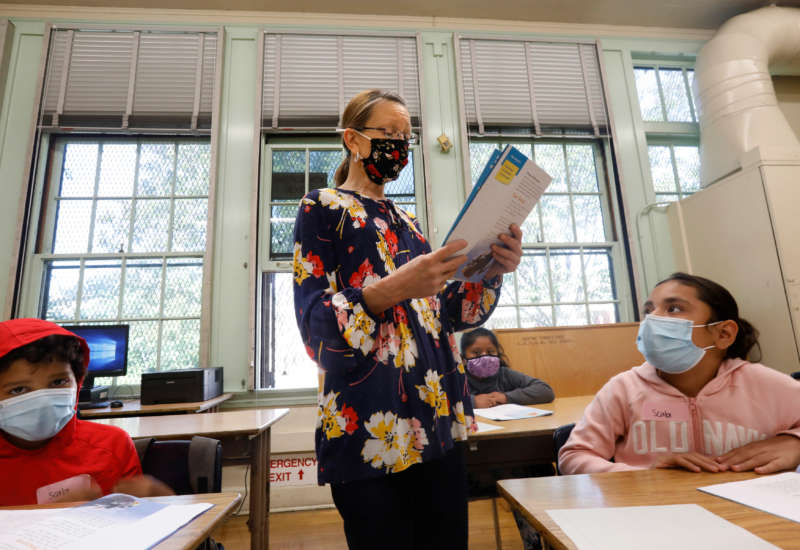 It is not unusual to see sharp monthly divergences between the two surveys. Over a longer period, they tend to show a similar picture of the labor market, but the household survey can have erratic movements that don’t seem to correspond to anything in the economy. For example, in October 2017, the household survey showed a drop in employment of 633,000, and then in August 2018 it showed a decline of 619,000. In both periods the economy was growing at a healthy pace and there was no evidence of weakness in other economic data. These drops were preceded and/or followed by months with large gains.

The biggest job gains were in state and local education (229,700), restaurants (194,300), and hotels (75,100). The gains in state and local education indicates schools returning to in-class teaching, although employment is still down by 583,000 from the pre-pandemic level. The arts and entertainment category also showed a large gain of 73,600, as many venues that had been closed due to the pandemic were able to reopen in June.

The retail sector added 67,100 jobs as large gains in general merchandise stores and clothing stores more than offset losses in food stores. Manufacturing added 15,000 jobs, but is still down by 481,000 from the pre-pandemic levels. Growth in the sector was slowed by a loss of 12,300 jobs in the auto industry, the result of continuing shortages. Construction jobs fell by 7,000, the third consecutive decline. This likely also reflects shortages of materials.

Airlines added 7,800 jobs, leaving employment 83,400 (16.1 percent) below the pre-pandemic level. The motion picture industry continues to be the hardest hit. While it added back 5,400 jobs in June, it is still down 149,400 jobs (33.8 percent) from the pre-pandemic level. Nursing homes lost another 3,600 jobs in June, continuing a pattern of job loss since the pandemic hit. Employment in nursing care facilities is now down 210,500 (13.3 percent) from February, 2020. This may reflect a drop in the number of residents due to the pandemic.

The average hourly wage from production and nonsupervisory workers continued to rise rapidly, increasing at a 5.9 percent annual rate comparing the last three months (April, May, June) with prior three months (Jan, Feb, Mar), and 3.7 percent year-over-year. The lowest paying sectors had even more rapid increases, with wages in the retail sector rising at an 11.7 percent annual rate over the last three months, but just 2.5 percent year-over-year. For restaurants the annual rate is 25.1 percent, and 11.2 percent year-over-year. These sharp wage gains at the bottom are impressive, but not likely to be inflationary since they account for a relatively small share of the total wage bill. The average hourly wage overall is up 3.6 percent from its year-ago level.

One item that doesn’t fit with the widespread labor shortage story is a small dip in the length of the average workweek from 34.8 hours to 34.7 hours, after a similar decline in May. If employers were really having trouble finding workers, we would expect to see them trying to work the employees they have more hours.

The drop in hours is also encouraging from the standpoint of productivity. With GDP growth likely to exceed 8.0 percent and hours rising at a roughly 4.0 percent annual rate, it looks like we will see another quarter of very strong productivity growth.

The number of unincorporated self-employed was little changed from May, but leaving it almost 300,000 above the 2019 average. These data are erratic, but it could mean many workers are starting their own businesses rather than returning to their old jobs.

The share of long-term unemployed rose by 1.2 percentage points to 42.1 percent — just below the recession peak and a level only exceeded in a few months in the Great Recession. Since these workers historically have found it more difficult to find jobs, it may slow further declines in the unemployment rate. In the same vein, the share of unemployment due to temporary layoffs edged down to 19.0 percent, from 19.6 percent.

The share of unemployment due to voluntary quits rose by 1.5 percentage points to 9.9 percent. This is still well below the 14.0–15.0 percent range we would expect in a strong labor market.

The Asian-American unemployment continues to run above white unemployment, 5.8 percent to 5.2 percent. Before the pandemic it was typically a small amount lower. With this pattern continuing, it is possible that racism may be a factor.

The job growth figure was somewhat better than most economists had predicted. A big factor is that schools are finally calling back many of the teachers laid off in the pandemic. The small rise in unemployment in the household survey is disappointing, but almost certainly an anomaly that will be reversed in future months. We will likely continue to see strong job growth, coupled with declines in unemployment.

It is worth mentioning that the decision by most Republican governors to end the $300 weekly unemployment insurance supplements had almost no impact on this report. Only Mississippi, Missouri, Iowa, and Alaska had ended the supplements by the June 12th reference date for the survey.