Manchin Has Made Millions From Coal Sales Since Joining the Senate 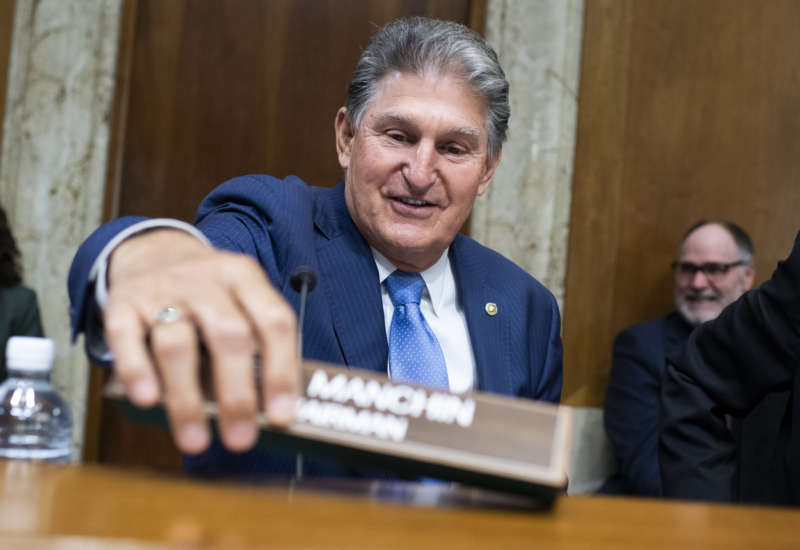 Sen. Manchin expressed skepticism about the Biden administration’s goals to halve greenhouse gas emissions from their 2005 levels by 2030, a policy target for which there are still no binding laws. In the current Congress, Manchin’s vote would almost certainly be necessary for the Senate to approve plans to reduce polluting emissions, which would require a clean-energy transition for the coal industry of West Virginia.

Manchin earns hundreds of thousands of dollars each year through coal sales to power plants that supply Edison Electric Institute member companies. His family company, Enersystems, is a contractor of American Bituminous Power Partners (AmBit), a coal power plant located near Grant Town, W.V. that provides energy to Monogahela Power Company, according to documents from the West Virginia Public Services Commission (PSC). Also known as Mon Power, the electric company is a subsidiary of energy giant FirstEnergy and an EEI member.

Manchin founded the coal brokerage Enersystems in 1988 and helped run the company, handing control to his son Joseph upon being elected West Virginia secretary of state in 2000 and reportedly moving his holdings into a blind trust between 2005 and 2010. A recent financial disclosure reports that his non-public shares of Enersystems are worth $1 million to $5 million. His total income from the company since joining the Senate is more than $4.5 million.

In his comments to EEI, Manchin argued that coal-fired plants are being unfairly targeted by environmentalists and claimed that the U.S. has relatively few coal plants, according to Utility Dive. A new report from the International Energy Agency found that coal and fossil gas power plants worldwide need to be retired as soon as 2035 if major emitters including the U.S. are to meet their targets for decarbonization.

Enersystems has no public website and little online presence, but information about its business operations can be found in records on the website of the PSC. Enersystems entered into a “Waste Fuel Services Agreement” with AmBit in April 2013, revised in Sept. 2015, with the term set to March 21, 2023. The agreement itself was not included in public docket filings; while AmBit provided copies to PSC staff as part of Aug. 2017 questioning, it was labeled “confidential.”

Dave Anderson, policy and communications director for the watchdog organization Energy and Policy Institute, identified a 2017 case involving an electric energy purchase agreement where PSC staff cross-examined Mon Power executive John Mustonen about the costs of the power provided to the company by AmBit. According to the transcript, the witness described Enersystems as an AmBit contractor, specifically for “the services of handling and production” of fuel at the plant.

Enersystems is also listed as a supplier to the Grant Town Power Plant in Energy Information Administration data from 2016-2017, where the brokerage is linked with coal sites named “Humphrey #7 mine” and “Barrackville refuse pile.” According to the website of holding company Perennial Power, the AmBit coal power facility in West Virginia is majority-owned by Grant Town Holdings Corp., a corporation formed in Pennsylvania in 2014, with 40% ownership by Perennial.

Sludge inquired with AmBit to confirm that the facility’s contract with Enersystems was still active, but did not receive a response. A FirstEnergy spokesperson confirmed that Mon Power has a purchased power agreement with AmBit, but said that Mon Power does not have awareness about subcontractors like Enersystems.

A 2017 report by the Energy and Policy Institute, “Utilities Knew,” documented the role of electric utilities in blocking lawmaking on polluting emissions while continuing to invest in fossil fuel facilities, despite EEI sponsoring climate research in the 1970s and early 1980s. “For example,” the report writes, “EEI and Southern Company spearheaded the 1991 Information Council on the Environment ad campaign, which aimed to ‘reposition global warming as theory (not fact).’” Also in 2017, an Energy and Policy Institute report found that utility companies funded by ratepayers sent $760 million from 2004 through 2015 to EEI in member dues, which then spent a total of $130.6 million on lobbying and political expenditures, 14% of its total expenses.

The event where Manchin spoke, called “The Road to Net Zero,” also featured Eric Holdsworth, director of climate programs for EEI, who previously served as deputy director of the industry group Global Climate Coalition that attacked climate science and lobbied against climate policy in the 1990s and early 2000s.

Edison Electric Institute spends more than $8 million a year on lobbying the federal government, according to OpenSecrets. The trade association’s lobbyists have raised money for the Democratic House and Senate campaign arms. Last year, EEI used efforts by FirstEnergy as case studies in boot camps for executives on how to defeat clean energy campaigns, including through interference with initiatives brought to voters through ballot measures.

At least one former Manchin staffer has taken a job lobbying for an EEI member company, promoting policies that could benefit the coal industry. Larry Puccio, currently registered as a lobbyist in West Virginia for EEI member FirstEnergy, is a longtime Manchin political advisor who worked as a chief of staff to Manchin as governor. Described as a “kingmaker” by West Virginia press, Puccio, the former state Democratic Party chair, crossed the aisle last year to support the reelection of Republican Gov. Jim Justice, a former Democrat who took the general election with nearly 65% of the vote. Puccio’s lobbying disclosure from January through April of this year also lists Diversified Gas & Oil Corporation as a client.

As the effects of climate degradation continue to mount, and as deadlines approach to cut polluting emissions, Sludge found that members of Congress had $93 million invested in fossil fuel industry stocks as of December 2019.