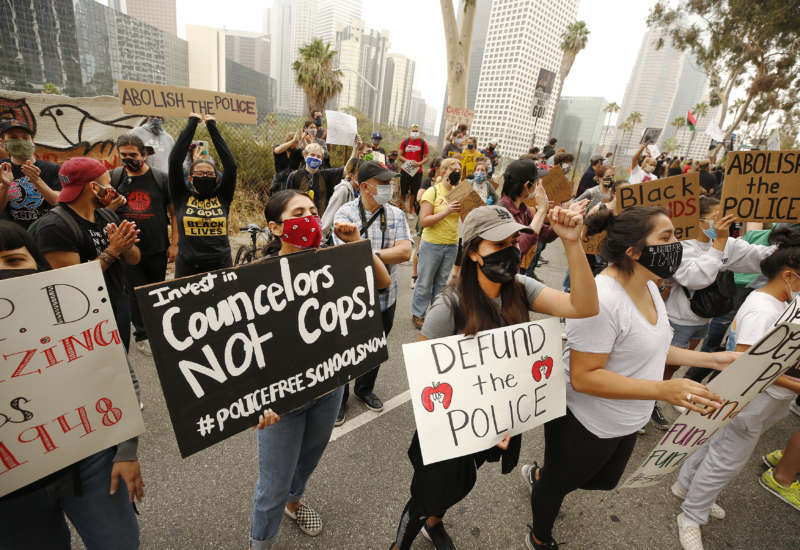 Republicans are fighting to limit the ways public school teachers talk to their students about U.S. racism. But the heads of teachers’ unions — like the AFT and the NEA — are refusing to organize workers to fight back.

Over the last few weeks, Republicans passed laws that ban public school teachers from teaching what they call “critical race theory” in five states: Oklahoma, Texas, Idaho, Tennessee, and Iowa. They have pushed for similar bills in 15 other states.

Even though Republicans say they are targeting “critical race theory,” the attacks have little to do with that set of ideas. Critical race theory comes from the academic field of legal studies and explores the effects of race on policy and law. But in Oklahoma and Texas, for example, the bills stop universities from making students take diversity training. They would also stop teachers from giving any educational credit to students for taking part in actions like anti-racist protests.

And in Texas, whenever teachers discuss race in current events, they have to show “contending perspectives without giving deference to any one perspective.” That means that when white supremacists rally with torches and chant anti-semitic slogans, and when a white supremacist kills an anti-racist protester with his car — as happened in Charlottesville in 2017 — teachers would be required to say that both sides had valid points of view.

Divide and Conquer: Unions and the Anti-Racist Movement

These laws aim to make it harder to teach students honestly about the role that white supremacy continues to play in the United States. And they are aiming to make it harder for teachers to help their students connect to, and understand, the struggle for racial justice that hasn’t ended.

Above all, though, officials are trying to keep one of the most powerful sectors of workers in the U.S. — teachers — separated from a powerful anti-racist movement that shook the country last summer.

Last year, Black youth led a massive struggle against the white supremacist police. That uprising sent shockwaves through the ruling class — and not just Republican leaders. The mayors and governors who savagely put down the uprising in Minneapolis, Philadelphia, New York, Portland and elsewhere were all Democrats.

Teacher unions, too, have shown major power and leverage over the last year. Both Republican and Democrat leaders — both Trump and Biden, and an army of Democratic mayors — tried to reopen public schools throughout 2020 and 2021 in the middle of a deadly pandemic. Teachers’ unions upset their plans again and again. The local teacher union in Philly, for example, refused to report to unsafe schools. In Chicago, too, they defied the mayor’s unsafe plan to reopen. Unions won key concessions — pushing back school openings until infection levels had fallen more, for example, and securing vaccines for teachers.

That fight cost the ruling class major profits. Early in the pandemic, newspapers like Bloomberg were reporting that closed schools meant billions in lost productivity for the bosses. That’s because closed public schools means parents — many from the working class — have to stay home too.

All of this means that it’s no surprise that lawmakers are fighting tooth and nail to limit the ways teachers and students talk about race. It’s crucial for the ruling class to keep one of the most powerful social movements in recent memory separate from one of the most unionized, organized segments of workers to protect its profits and its power.

The laws against teaching “critical race theory” are a direct attack on teachers’ work. But the leaders of teacher unions are refusing to truly fight back.

The heads of the NEA — the biggest union in the U.S. — have only made a few weak statements in response to the legislation. In an interview, Becky Pringle says the laws “won’t stop” teachers from teaching about racism. And NEA Today, the union’s magazine, ran a story on the importance of learning about racism. For its part, that article called for teachers to take part in the Zinn Project, to pledge to individually teach the truth about race and oppression in U.S. history. But NEA leaders are stopping well short of organizing a mass refusal of the new rules — the NEA Today article just calls for “raising awareness.” And they’re stopping well short of organizing the union to disrupt business as usual in Texas, Oklahoma, or beyond — through a walkout or strike, for example.

In the AFT, too — my union and the eighth biggest union in the country — we’re getting precious little beyond a few sharp words. AFT president Randi Weingarten put out a statement that criticized Florida’s new rules on teaching race and defended the importance of critical race theory in an interview. The Texas AFT also issued a statement critiquing the new set of rules there.

But it’s clear that no statement will stop this latest attack on teachers. Instead, Weingarten, Pringle, and other union heads are waiting for the Democratic Party to save them — the reason they spend so much time fundraising for Democrats like Biden.

But this is a failed strategy. It wasn’t Biden or any Democrat who stopped the unsafe school openings from happening. Exactly the opposite was true: it was teacher unions themselves, taking action on their own by refusing to return to their classrooms, that delayed the reopenings. They did this in defiance of the Democratic Party. It was Democratic mayors and Biden himself vowed to open schools during the pandemic.

And it wasn’t Democrats who fought white supremacist cops after the murder of George Floyd or Breonna Taylor; it was activists, led by Black youth, who did that in the streets, toe to toe with the cops. In fact, Democratic mayors in Philly, Portland, and DC attacked the movement against the cops, all while Biden called for cops to just shoot Black people in the leg instead of the heart.

Stopping this latest round of attacks on teachers means relying not on the Democrats but on ourselves and the weapons we hold as workers. The pandemic showed teachers the key power they hold to affect the economy. That leverage is even greater now than it was a few months ago: the capitalists are desperate for an economic recovery to recoup the profits they lost during the pandemic shutdown.

Using our leverage means doing more than making statements. It means taking real action: sickouts, walkouts, strikes, and pickets to defend our right to teach the actual, racist history of the United States. These actions could help build real solidarity actions with Black Lives Matter locals. In other words, they could help build exactly the kind of power between the anti-racist movement and teachers’ unions that the Republicans are terrified of.

Our union leaders are waiting for Biden and the Democrats to save us. They won’t. Fighting the latest attack on teachers means fighting from the bottom up, in our locals, taking action on the job and forcing our leaders to really join the struggle for Black lives.