Biden Elevates Fight Against Monopolies as Next Step in Economic Revival 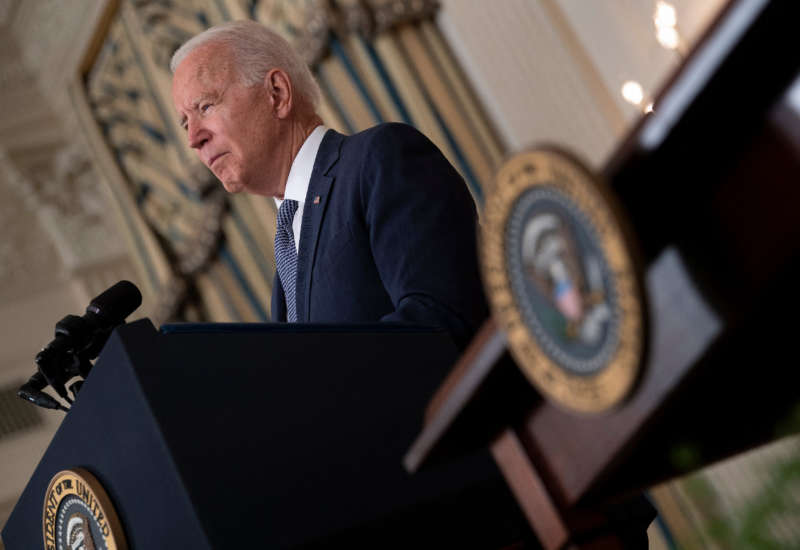 Over the past couple weeks Joe Biden has been honing a progressive economic message that borrows both from the Progressive Era in the early years of the 20th century and the New Deal years of the 1930s and 1940s. In his embrace of antitrust politics this summer, he is going further than either Bill Clinton or Barack Obama did to take on entrenched economic powerhouses and to craft a progressive-economic governing philosophy. Six months into his presidency, despite compromises on his infrastructure bill that have alienated the left of his party, Biden is still thinking big and strategizing ways to alter the balance of power within the American economy.

Front and center in this is an effort to go after large monopolies, in particular in the hi-tech sectors, and to use the power of the government to essentially jump-start competition in key sectors of the economy that, to borrow from the lexicon of mid-century economists, could be considered “commanding heights” and that are currently controlled by a tiny number of companies.

On July 9, the president spoke about the need to break up the great monopolies of our time, and to regulate how they use their dominance to put the squeeze on competitors and to foist hidden fees and other costs onto consumers. He framed his administration’s response not as an attack on capitalism, but much as FDR framed the New Deal, as a way to save capitalism from itself. At a time when the U.S. and its geopolitical allies are in an increasingly unpredictable Cold War-styled conflict with China, these nations see a need to promote their political systems as capable of spreading wealth simply by tweaking the ground rules of capitalism — and protecting the system from its tendency to cannibalize all that stands in the way of maximizing short-term profits. “The heart of American capitalism is a simple idea: open and fair competition,” he opined. But in recent years, he averred, big companies have taken shortcuts. “Rather than competing for consumers they are consuming their competitors. Rather than competing for workers, they’re finding ways to gain the upper hand on labor.” He continued, “let me be very clear: Capitalism without competition isn’t capitalism; it’s exploitation.”

In his speech, Biden talked about how Teddy Roosevelt took on the oil and railway magnates and beat them. He referenced how Franklin Roosevelt “ramped up antitrust enforcement eightfold in just two years.” Biden then talked about how, for the past 40 years, presidential administrations have pulled back from enforcing antitrust laws and have let monopolies concentrate power again.

Shortly after he finished talking, Biden signed an executive order containing more than 70 provisions aimed at stimulating competition and helping consumers, in an array of industries that are currently beholden to a few corporate behemoths — from Big Pharma through to social media and internet services. These provisions include making it easier for Americans to buy cheaper pharmaceutical drugs from suppliers in Canada, making it harder for tech giants to collect data on their users’ internet habits, and stimulating competition amongst broadband internet providers.

All of this came fast on the heels of an effort by the Federal Trade Commission (FTC) to bring an antitrust case against Facebook, arguing that Facebook’s ownership of Instagram and WhatsApp was giving it monopoly powers. In dismissing that case, a federal court in late June found that Facebook hadn’t violated current antitrust laws, and that it had achieved something approaching monopoly powers through legitimate business practices and competition. The FTC, the judge ruled, had stepped over a line in attempting to roll back the fruits of a successful business strategy.

Following that decision, a wide range of political figures — from populist Democrats such as Senators Bernie Sanders (I-Vermont) and Elizabeth Warren (D-Massachusetts), to far right politicians such as Rep. Matt Gaetz (R-Florida) — call for an overhaul of the country’s antitrust laws to give government the necessary legal tools for taking on the combines of our age. A consensus is growing — one that started taking root during the Trump era — that corporations such as Amazon and Facebook, and business titans such as Bezos and Zuckerberg, exercise the same sort of stranglehold over the economy today as did the railway and oil and steel companies of the late 19th and early 20th centuries. And, emerging out of that realization, a consensus is also taking root that it is past time to update the U.S.’s antitrust laws so as to make it easier to break up companies that now rival mid-size countries in terms of the economic clout they wield on the global stage. Biden’s executive order should, in this context, be viewed as the starting gambit in a much larger, and longer, struggle. It should also be viewed in the context of rising geopolitical tensions with China — which have the potential to spill over into war at some point in the next few years — and as a defense of the notion that capitalist democracies can continue to deliver needed reforms and material well-being to the majority of their citizens.

The executive order also came as the Biden team was pushing countries around the world to sign onto the idea of a global minimum corporate tax, to prevent big companies from simply relocating to tax havens, which allow them to avoid paying higher tax bills in their home countries.

This idea has long been championed by progressives — along with globally coordinated financial transaction taxes aimed at raising tax revenues off of the extraordinarily high volume of trades in stocks, bonds, and other financial instruments in this era of automated, artificially intelligent trading systems. Now, however, it is moving off of the utopian wishlists of radical economists and into the mainstream, and the Biden administration seems willing to employ the U.S.’s diplomatic clout to forge a new, and surprisingly progressive, Washington consensus around global tax rules.

The shift away from Clintonian, and, to a lesser extent, Obama orthodoxies on the economy is profound; and it is long overdue. Clinton came to measure his economic success largely by the performance of the stock market, and Obama by levels of economic growth following the devastating financial crisis unleashed in 2007-08. Both of those measures do tell us something about the broader state of the economy, but by themselves they are woefully inadequate. They do not speak to issues of inequality — or, more particularly, unequal access to basic resources such as affordable and fast internet connections, or life-saving medicines. In choosing their economic priorities, both Clinton and Obama shied away from tackling tendencies toward monopoly in the sparkling new hi-tech growth sectors of the economy.

Biden, by contrast, is dancing to a different tune. His team seems unintimidated by the prospect of taking the fight to big business. To the contrary: They seem to have concluded that the public is with them in this fight and that they stand to benefit politically from promoting antitrust, anti-monopoly policies.