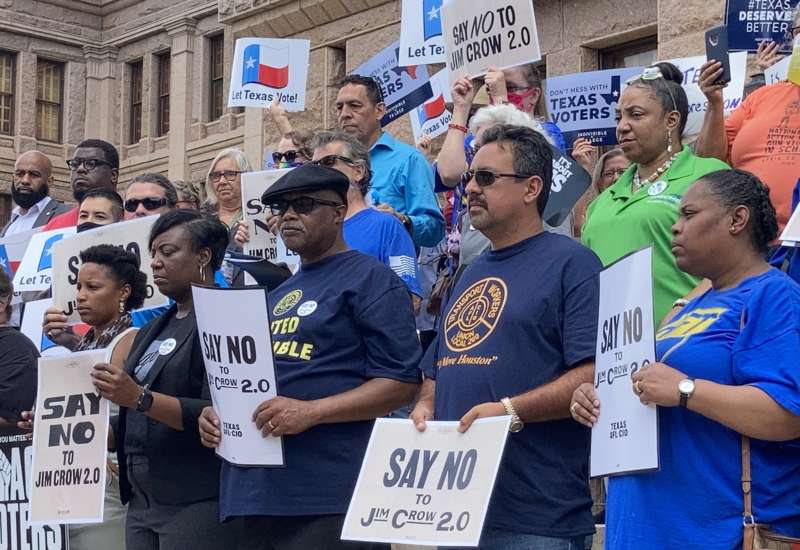 Austin, Texas—Texas Democrats and progressive voting rights advocates at the state capitol expressed disappointment Tuesday after President Joe Biden’s speech on voting rights at the National Constitution Center in Philadelphia failed to mention the Senate filibuster. The president remained silent on the issue even as he framed this year’s wave of state-level voter suppression laws as “the most significant test of our democracy since the Civil War.”

Voting rights defenders rallied at the state capitol Tuesday to support more than 50 Texas House Democrats who left for Washington, D.C., Monday to deny the state chamber a quorum as it takes up some of the country’s most restrictive voter suppression bills during a special legislative session. Gov. Greg Abbott threatened to arrest the legislators upon their return to the state.

Texas Republicans attempted to push ahead with their voter suppression effort in Austin Tuesday, with the Texas Senate approving Senate Bill 1 along a party-line vote of 18-4. At least 4 of 13 Democrats in the State Senate remained in Austin on Tuesday morning, failing to deny that chamber a quorum. The Senate’s passage of the bill, however, remains largely symbolic since the legislation can’t move forward in the House as long as at least 51 Democrats remain absent.

In the Texas House, Republicans tried to regain the quorum they lost with a “call of House.” Under this order, all entrances or doors leading out of the chamber are locked, and members are not permitted to leave without permission in writing from the speaker. The House then voted overwhelmingly to send law enforcement after the missing Democrats, asking that “the sergeant at arms, or officers appointed by him, send for all absentees … under warrant of arrest if necessary.”

Meanwhile, voting rights advocates in Texas hope Biden will take a cue from the state’s Democratic lawmakers and escalate his actions against the Senate’s 60-vote rule that blocks federal voting rights legislation.

On Tuesday in front of the Texas state capitol, Texas Civil Rights Project Senior Staff Attorney James Slattery called on President Biden and Democratic Senators Joe Manchin and Kyrsten Sinema to use their power and leverage more forcefully to pass the For the People and the John Lewis Voting Rights Advancement Acts.

“Your colleagues down here in this building were willing to risk arrest and leave their homes for months to save democracy in Texas,” Slattery said. “Isn’t it the least you can do to vote to end the filibuster and pass voting rights legislation?”

Senator Manchin said he will meet with the Texas Democratic lawmakers later this week, reported NBC News White House Correspondent Geoff Bennett. Manchin, however, didn’t respond when asked if he would support a special carveout in the filibuster for voting rights legislation, saying only that he’s “anxious to meet with” the legislators.

“Your colleagues down here in this building were willing to risk arrest and leave their homes for months to save democracy in Texas. Isn’t it the least you can do to vote to end the filibuster?”

Outside the U.S. Capitol in Washington Tuesday, 47 of the missing Texas Democratic lawmakers urged passage of the For the People Act ahead of a meeting with Senate Majority Leader Chuck Schumer. The federal legislation would restore parts of the Voting Rights Act that were gutted by the Supreme Court and rein in state-level restrictions on voting like those now being proposed in Austin. Texas’s Senate Bill 1 and House Bill 3 would ban drive-through and 24-hour voting, prevent election officials from sending out unsolicited absentee ballot applications to voters, empower partisan poll workers, and further restrict voting by mail.

The group later met with Vice President Kamala Harris, who was joined by Emmy Ruiz, a senior Biden administration staffer and Texan. “I know what you have done comes with great sacrifice, both personal and political,” Harris reportedly told the lawmakers. The delegation, however, is still working to secure a meeting with Senator Sinema, who alongside Senator Manchin, remains the other key Democratic defender of the Senate filibuster.

Back in Austin, Jamarr Brown, who began his tenure as the Texas Democratic Party’s first Black co-executive director on Monday, told Truthout outside the state capitol that he remains more cautiously optimistic as the Texas lawmakers meet with key Democratic leaders, despite Biden’s silence on the filibuster in Philadelphia. So far, he says, members seem satisfied with their meetings.

“I am trusting that they have figured out, both with White House staff but also the vice president, more direct strategy of how to navigate the parliamentary procedure,” Brown said. “I think that the president is committed to voting rights. I think he is committed to getting this passed, but I do think he held his cards close [during his speech], and that’s the direction he chose. I know it’s disappointing, but I do believe this will happen in the end.”

Texas Democratic Party Co-Executive Director Jamarr Brown speaks outside the Texas state capitol on July 13, 2021, in support of more than 50 Democratic lawmakers who left the state in order to break quorum.Candice Bernd

Biden is facing rising pressure to throw his full political weight behind ending the filibuster and protecting voting rights. Civil rights activists emphasize Biden couldn’t have been elected without broad support from Black people, whose votes are being disproportionately being suppressed. House Majority Whip and longtime Biden ally Jim Clyburn pushed this week for a filibuster carveout for voting rights legislation.

During his 23-minute speech Tuesday, Biden called state-level voter suppression efforts “un-American” and “un-democratic,” and called passage of the federal voting rights proposals “a national imperative.” Without offering any specifics on how Democrats might pass the voting bills through a narrowly divided Congress, he seemed to acknowledge the bills’ slim chances, saying he would launch a national campaign to inform voters on new restrictions ahead of midterm elections.

The speech furthers the White House’s shift toward focusing on other measures to protect voting, including Justice Department-led legal action in states and boosting voter turnout.

Texas State Rep. Chris Turner, who chairs the House Democratic Caucus, predicted during the members’ D.C. press conference that their efforts would go in vain unless congressional Democrats take bold action to overcome Senate Republican opposition to the federal voting bills. “We can’t hold this tide back forever. We’re buying some time. We need Congress and all of our federal leaders to use that time wisely,” he said.

Turner said that any negotiations about Democrats returning to Austin would have to start with Governor Abbott reversing his veto of funding for the legislative branch. Democrats are taking the governor to court over the veto, which he issued after House Democrats walked out of the chamber in the final hours of the regular session, breaking quorum. The funding is set to run out August 31.

“This was not a real legislative process; this is just a raw, naked grab for power to pass this bill as fast as possible no matter how many voters it hurts.”

“The majority on the committee in the House made it clear that this so-called legislative process was a complete sham,” said Texas Civil Rights Project’s Slattery outside the state capitol. He was among hundreds of Texans who stayed up 24 hours over the weekend to testify against the bills before they were advanced out of House and Senate committees. “This was not a real legislative process; this is just a raw, naked grab for power to pass this bill as fast as possible no matter how many voters it hurts. The Democrats had no choice but to bring these sham proceedings to a halt.”

As doors to the Texas House remained locked Tuesday, the four Democratic senators who remained in the state capitol interrogated Republican State Sen. Bryan Hughes, Senate Bill 1’s author. They took him to task for previously defending now-removed provisions seemingly designed to hinder efforts by Black churches to turn out voters and that would have made it easier for judges to overturn elections. Asking how they could possibly trust Hughes’s intentions, the senators accused him of “putting lipstick on a pig” and questioned what other “unintended” provisions could be included, after the bill’s latest version was passed so quickly out of committee.

Meanwhile, with the call of House still in effect, Texas Democrats appear likely to be able to hold off the Republican suppression effort as long as they remain in D.C., which they have committed to for at least another three weeks — the duration of the current special session. After that, the governor will likely call a new special session, forcing the lawmakers to make a decision on whether to extend their stay.