If the Supreme Court Overturns “Roe v. Wade,” It Will Impact Us All 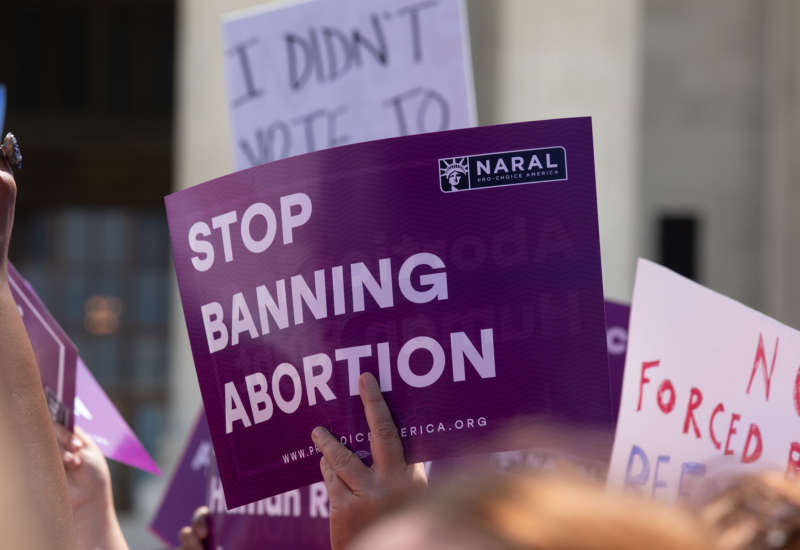 In June of 2022, upwards of 35 percent of the U.S. could instantly lose access to legal abortion. The Supreme Court’s decision on Dobbs v. Jackson Women’s Health Organization could effectively overturn Roe v. Wade, a landmark case in 1973 which held that a person’s right to choose an abortion was integral to their right to privacy and therefore should not be dictated by the government. Through decades of carefully orchestrated, conservative state-level action, 24 states are poised to overturn Roe protections, including 10 with immediate “trigger bans” in place, which would remove already limited abortion access as soon as federal protection ends. While this is overwhelming, there are steps we can take now to protect and expand abortion access. Since change happens from the ground up, one of the most critical things we can do is to increase our support of state- and local-level reproductive rights and justice activism.

For people living in these “trigger ban” states, or in historically excluded communities across the country, already limited abortion access could end entirely. For those in sanctuary states like Colorado, limited resources could become even more strained. For all states, tenuous abortion access laws are only as strong as the current makeup of that state’s lawmakers. It took decades in Washington State and in Virginia, for example, to build up progressive state legislatures to advance reproductive rights protections, but it would not take long to undo that progress if either state legislature flipped to a conservative majority. In Southern states like North Carolina, a conservative state legislature is continuing to push through abortion restrictions despite the fact that the majority of constituents support Roe.

Every single person in the U.S. would be impacted by the overturning of Roe v. Wade. We all know and love someone who has had an abortion. In fact, an estimated 23.7 percent of people who can give birth will have an abortion by age 45. Without Roe, it will be even be more likely you or someone you love could be criminally charged for having a miscarriage: In Georgia, people could face up to 30 years in prison for miscarrying; in Alabama, an individual was charged with manslaughter in the loss of pregnancy after being shot; in Washington State for miscarrying in a hotel room — or even for using certain forms of birth control. Any one of us could be sued for driving a friend or partner to their abortion, under the new Texas law that criminalizes “aiding and abetting” of abortions. If you are lucky to live in a place with state-level abortion protections, you could expect that your independent clinics and abortion providers, who are already under-resourced, would be further constrained when people from neighboring states come to seek care. No one is exempt from the impact of overturning Roe v. Wade, and no one should underestimate the power of precedent when it comes to removing individual rights to bodily autonomy.

The protection of reproductive rights at the state level, both the creation of policies that improve abortion access and the prevention of restrictive policies that reduce it, has taken decades. It has been most effective with local power- and relationship-building, the intentional centering of community voices and the cultivation of egoless leadership. Expanding reproductive rights can only be accomplished through the continued building of trust with and participation by community members in the grassroots organizing groups.

Central to this discussion is that reproductive rights are only a small piece of the abortion access ecosystem. Local and regional abortion funds, and organizations like SisterSong, have for decades emphasized that legal protections are only the bare minimum, and often not even that. The right to live in health and safety takes far more than basic legal protections, and actual abortion access is dependent on several more factors than just whether Roe holds. This remains true, and if Roe is overturned, abortion access would become even more dependent than it already is on where a person lives, their income level, their physical ability, their type of insurance, where they are in their pregnancy, and deeply ingrained disparities due to their race, gender and how they self-identify. Roe has never been enough. We need better.

Fortunately, we are not without power. We can donate to or volunteer with grassroots organizations in our states and communities. We can support local abortion funds and volunteer to escort patients at clinics. We can ask local candidates — from school board commissioners to city councilors to state legislators — where they stand on reproductive rights, health and justice issues. We can vote in all municipal and state elections, and hold elected officials accountable to their campaign promises about abortion protection. We can remind each other that the decision to get an abortion is personal. We can and should speak out about why we support abortion access to help remove harmful abortion stigma. We can remind each other that the majority of people across the country support abortion access, and that the conservative action is not reflective of the majority viewpoint.

Abortion access impacts every single person in our country, regardless of gender, geographic location, income or political orientation. We cannot lose our fundamental right to private decision-making about our own bodies, and — while this feels frightening and overwhelming — we all can and should work together to make a difference. Your voice matters. Every voice does.