Let’s Call the “Border Crisis” What It Is: Another Big Lie From the Right 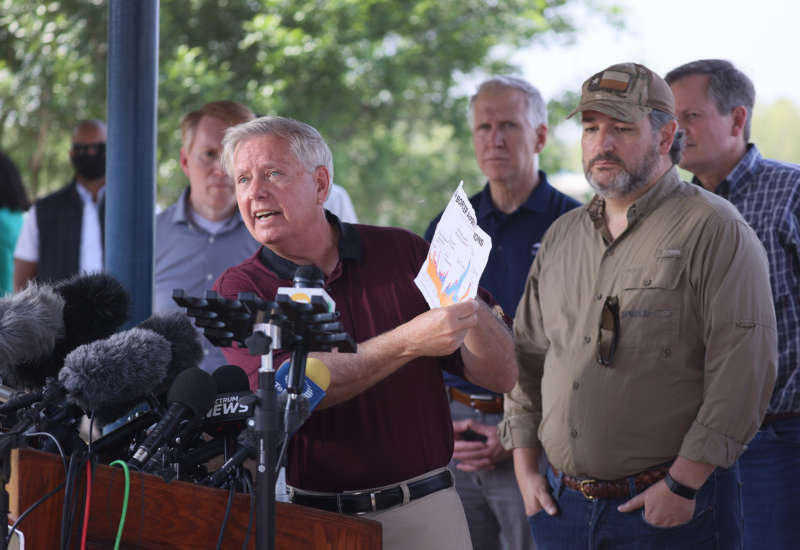 Republican politicians and commentators spent the last week of June promoting their claim that this year’s increase in apprehensions at the U.S.-Mexico border constitutes — in the words of Fox News host Sean Hannity — “a crisis of a monumental scale.”

The campaign’s high point came on June 30 when former president Donald Trump visited a stretch of the border wall near Pharr, Texas, and delivered a number of “questionable statements” about his administration’s supposed enforcement successes. With him was Texas Gov. Greg Abbott, who plans to have his state build a border wall of its own. South Dakota Gov. Kristi Noem was not to be outdone: Her office had announced the day before that the state was sending 50 of its National Guard members to the southwestern border.

A group of far right lawmakers, including Colorado Rep. Lauren Boebert, were also at the border. They toured the area near La Joya, Texas, on June 29 — accompanied by unindicted January 6 rioter Anthony Agüero — and joined up with Trump’s tour the next day.

This series of photo ops looks like an effort to keep the public focused on border apprehensions at a time when media outlets have largely moved on from their earlier exaggerated coverage of the topic. MSNBC cable TV host Joy Reid has even gone so far as to describe the situation at the border as “a nonexistent crisis.”

There are real crises at the border, of course. The Biden administration is still failing to provide adequate treatment to minors who have crossed from Mexico, and it’s continuing a 2020 Trump policy of expelling migrants under Title 42 of the U.S. health code, although there may be a change at the end of July to exempt family units. This policy has resulted in thousands of asylum seekers suffering violent attacks after being forced back into dangerous areas in northern Mexico. And while GOP politicians talk about “Biden’s open borders policies,” migrants continue to die in their efforts to elude capture at a frontier which is actually quite well guarded. In May, the Border Patrol reported finding the bodies of 203 migrants so far in fiscal year 2021.

But the present increase in border apprehensions hardly justifies the term “crisis.”

It’s true that as of June, this fiscal year’s apprehensions had topped 1 million for the first time since 2006. Still, this only seems high because of a sharp contrast with the previous 14 years. Apprehensions were unusually low during that period, as Princeton sociologist Douglas Massey, an expert on immigration patterns, showed in a 2020 study. Apprehensions exceeded a million a year for most of the period from 1983 to 2006, but they declined significantly during and after the Great Recession of 2007-2009. This year’s increase is at most a return to normal.

But it may well be a temporary uptick. “My guess is that [the 2021 increase] shows the effects of the COVID epidemic,” Massey told Truthout in an email. Economic hardships created by COVID may have pushed more Mexican workers to cross the border, he noted, and these conditions might also explain the increase in asylum seekers from Brazil, Cuba, Ecuador, Nicaragua and Venezuela.

In addition, stepped-up border enforcement itself accounts for part of the increase. The number of apprehensions is inflated because of the Title 42 policy, according to a fact sheet from the American Immigration Council, a nonprofit advocacy group. By simply pushing migrants back across the border without formally removing them, the policy makes it easier for migrants to attempt repeated crossings — and to be apprehended more than once. From 2014 to 2019, before Title 42 went into effect, only 15 percent of the migrants apprehended by the Border Patrol had been apprehended previously in the same year. In May 2021, recidivists accounted for 38 percent of apprehensions.

In any case, an increase in apprehensions at the border doesn’t necessarily translate into more migrants getting into the United States without being caught.

When commentators compare apprehension figures now with those from previous years, they ignore the fact that the number of Border Patrol agents has nearly doubled since 2003. According to a June tweet from the American Immigration Council’s Aaron Reichlin-Melnick, the number of people who cross the border without being apprehended might be five times lower now than it was 15 years ago.

The GOP’s hyped-up “border crisis” is simply the latest stage in a long-term process of exaggerating the impact of unauthorized immigration. Undocumented U.S. residents only make up 3 percent of the country’s population, and the number has been declining since 2007. Nevertheless, U.S. adults rank immigration as the second most important problem facing the U.S., according to a July 1 Ipsos poll.

Undocumented immigrants aren’t actually a problem, but the Republican Party has framed them “as criminals and lawbreakers and a grave threat to the nation in order to motivate and mobilize the Republican base, to great effect,” Massey told Truthout. Up until now, the Democrats have failed to push back, he added. They “have sought to placate conservatives by agreeing to boost border enforcement and internal deportations in hopes that the Republicans will move toward legalization for those already here.” Massey called this “a completely unrealistic expectation.”

What can be done to challenge the conservative narrative? Massey noted that “it is difficult to counteract the effect of so much misinformation and disinformation that is put into the public sphere by well-funded political and ideological actors.” Still, there are signs of movement.

Joy Reid’s dismissal of the “border crisis” is a step in the right direction — as is shown by the reaction from the right-wing media. Rep. Alexandria Ocasio-Cortez (D-New York) has also pushed back, pointing out that the topic can be used to start a serious conversation on migration’s root causes. It’s possible to have what Massey calls “a reasoned appraisal of what’s happening at the border,” but more people need to step up and call this “crisis” what it is: another big lie from the right.