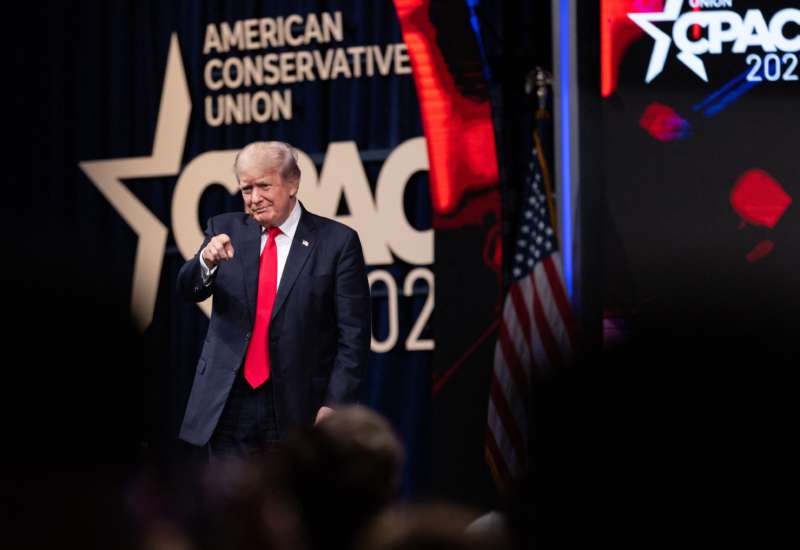 Donald Trump lost the presidential election more than eight months ago, yet for many of his followers, it is a matter of faith that at some point later this summer, he will somehow be “reinstated” as president.

Trump himself has been fanning the flames of this fantasy, appearing either in person or from his Mar-a-Lago perch via satellite link at political rallies in which speakers have, at various times, called for martial law, spouted QAnon conspiracy theories and urged military intervention against Joe Biden’s administration. On Telegram and other encrypted social media sites, there are increasingly strident calls for violent actions aimed at reinstating Trump. And die-hard supporters such as MyPillow CEO Mike Lindell and former Trump adviser Steve Bannon have been touring the country claiming that vote count “audits” in Arizona and elsewhere will trigger Supreme Court rulings that negate Biden’s victory.

The drip-drip of conspiracist rhetoric by Trump and his acolytes, as well as the congressional GOP’s craven refusal to throw its weight behind a bipartisan commission to investigate the January 6 Capitol breach, has had a measurable impact in this era of disinformation and social media panics.

Last month, a Hill/HarrisX poll found that about 30 percent of Republicans thought it likely Trump would be declared president again this year. Other polling has found that a significant percentage of all respondents think Trump could well return to the presidency in 2021; this includes up to 1 in 5 Democrats and 3 in 10 Independents — who, presumably, largely view this prospect not with glee but with horror.

In less fraught times, such a gaping lack of understanding of how basic political processes in this country work would be dismissed as the rantings of a fringe cult. But in the wake of January 6, when thousands of hard rightists, with Trump’s tacit blessing, stormed the Capitol and went on a hunt for political figures they viewed as enemies, it’s hard to over-emphasize the dangers that this movement poses to the future of U.S. democracy.

Earlier this summer, the Department of Homeland Security (DHS) briefed Congress specifically on the danger that this movement could turn to violence again. As the supposed August “Trump reinstatement” date neared, the DHS worried the individuals and groups could shed blood as a way to somehow trigger a broader conflict. Far from easing his foot off the accelerator in this moment, Trump has, once more, poured gasoline on a fire, this time through valorizing insurrectionist Ashli Babbitt — who was shot dead by a police officer as she and others surged into the Capitol — and claiming, without evidence, that she was actually assassinated by a Democratic security official.

Last week, reports circulated about how the top military brass was convinced, in the run-up to the January 6 congressional certification of the Electoral College vote, and in the weeks leading up to Biden’s inauguration, that Trump was about to order a military coup.

The more we learn about Trump’s last months in office, the clearer it becomes that talk of coups and martial law was far more than just idle chatter.

A new book, I Alone Can Fix It, by two Washington Post reporters, has detailed how Chairman of the Joint Chiefs of Staff Mark Milley and other top generals believed such an order was a real possibility and discussed mass resignations as a way to stymie Trump’s democracy-busting plans.

That such discussions were taking place at the very highest levels of the military is surreal in and of itself, indicative of just how far off the rails the Trumpites were heading in their final days in office, and just how far removed from democratic norms that entire rotten regime had gotten.

Milley’s willingness, along with that of his top military colleagues, to resign rather than carry out illegal orders was honorable, but of itself it would not have been adequate. If they were so concerned, why didn’t they go public with those grave worries in late 2020, warning the public that coup-plotters were gaining traction inside the White House, instead of waiting months after the fact to belatedly air their sense of unease to reporters? Silence in such a desperate situation, even if mandated by a desire to remain politically neutral, seems sorely insufficient.

Had those hunkered down with Trump in his final redoubt ended up declaring a form of martial law and ordering new elections in key swing states, Trump’s team could simply have appointed other, more pliable generals to replace those unwilling to be complicit in his dictatorial ambitions — men and women whom he would undoubtedly have tried to portray as “enemies of the people” and against whom his fierce propaganda apparatus would instantly have been turned.

Moreover, while the top generals grew increasingly wary of Trump’s methods and his values as his presidency wore on, among military veterans, a majority continued to support the real estate mogul into the 2020 election and beyond. Veterans and other weapons-trained personnel (especially in law enforcement) formed the backbone of extremist groups such as the Oath Keepers, who were central to both the Capitol breach and other pro-Trump protests around the country. There’s no guarantee they would have followed the generals over Trump in such a battle of the wills.

There is, in fact, a long — and largely ignored — history of extremism within the military, one that Trump tapped into ruthlessly. Acknowledging this, earlier this year Defense Secretary Lloyd Austin ordered a service-wide review designed to tackle extremism among rank-and-file personnel; reports still abound of current and ex-military personnel involved in far right groups, such as Atomwaffen Division and other racist and extreme-nationalist organizations, although the scale of this is hard to estimate since the military has been notoriously lax in compiling relevant data.

The more we learn about Trump’s last months in office, and his willingness to lean on the muscle provided by paramilitary groups such as the Oath Keepers, the clearer it becomes that talk of coups and martial law was far more than just idle chatter. Trump couldn’t fathom losing his reelection bid and bowing out gracefully; he had no interest in a peaceful transfer of power and a preservation of basic democratic principles, and he felt no moral limits on his exercise of power to beget more power. The recent revelations about how worried the military’s top brass were about being ordered into action against U.S. civilians give further evidence of just how close the American democratic experiment came to a catastrophic collapse.

Alas, that danger was not neatly and finally put to rest on the evening of January 6, when Trump’s insurrection collapsed; nor was it eradicated on January 20, when Joe Biden was inaugurated as the 46th president. More than a half year later, it is still percolating, fanned by a graceless ex-president and his preening, egotistical fantasies about a summertime Second Coming.