Biden Upholds Last-Minute Trump Memo That Would Send 4,000 People Back to Prison 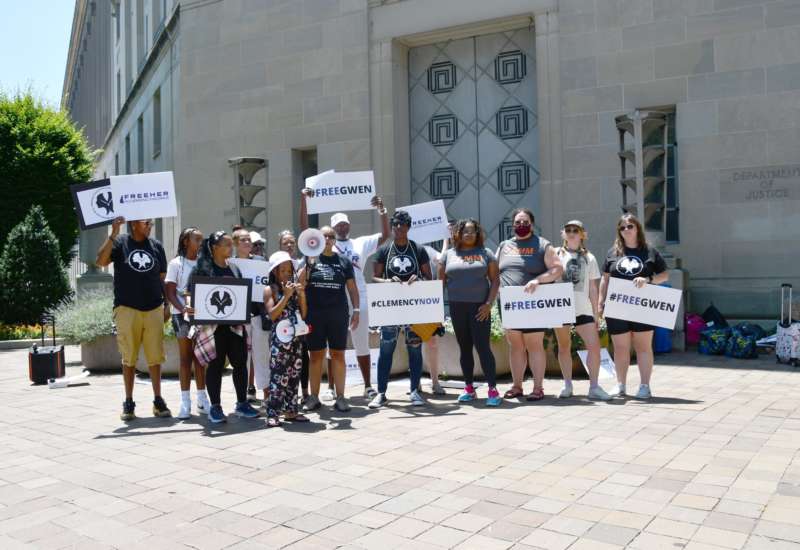 For her 65th birthday, Diana Marquez was grateful to be out of prison and celebrating with her daughter, son-in-law and three grandchildren. They feasted on a smorgasbord of brisket, sushi and Mexican food. She was not allowed to leave the house, but she still felt blessed to celebrate the day surrounded by family rather than confined in a prison cell.

Marquez is one of over 4,000 people who were released from federal prison to home confinement under the Coronavirus Aid, Relief, and Economic Security (CARES) Act to stem the spread of COVID-19 behind bars. The CARES Act prioritizes the release of people whose age or health makes them vulnerable to COVID, whose “risk assessment” is low and whose convictions are for federal crimes classified as nonviolent. Marquez, then aged 63 and 16 years into a 30-year sentence for conspiracy to distribute marijuana, qualified; she was released from prison on May 22, 2020.

Marquez is not free. She is under home confinement with an electronic monitor shackled to her ankle. She must get prior approval for any movement outside of her daughter’s house, including picking up her three grandchildren from school or going grocery shopping. She is allowed two hours out of the house each morning to go to the park. She must check in with federal halfway house officials every two weeks. She is not allowed to attend church services. However, Marquez told Truthout, “I’m not complaining. I’m at home, able to walk around the house, not in a small room.”

On January 15, 2021, five days before Donald Trump left office, his Justice Department issued a memo stating that people whose sentences lasted beyond the “pandemic emergency period” would have to return to prison. The Biden administration has decided to uphold that decision. While the official state of emergency is not expected to end in 2021 because of the rise in new infections and the Delta variant, the threat hangs over Marquez. Her sentence ends on March 9, 2031; by then, she will be 74 years old.

“It worries me,” she said. “It’s devastating to think that at any moment, they can come and take me.”

Returned to Prison on a Technicality

Some of those who’ve been released due to the pandemic have already been returned to prison, thanks to technical “violations.” That’s what happened to 75-year-old Gwen Levi. Levi had served 16 years of a 24-year federal prison sentence for conspiracy to distribute heroin. She also battled cancer while in custody, a fight that, along with her age, left her more vulnerable to contracting severe COVID. She was released under the CARES Act and placed under electronic monitoring and home confinement in Baltimore.

“What are people supposed to do? Hope that the pandemic never ends so we can keep our freedom?”

During her year at home, Levi reconnected with her family, including her children and her 94-year-old mother, with whom she now lives with and cares for. She began volunteering with prison advocacy organizations, including Families Against Mandatory Minimums (FAMM), the National Council for Incarcerated and Formerly Incarcerated Women and Girls and the Maryland Justice Project, where she is advocating for state legislation that would give a second chance to people sentenced to life as juveniles.

In January 2021, she was shocked when she heard about the Justice Department memo. “We were assessed and [found] not to be a threat to our community,” she told Truthout. “Don’t hang the threat [of being returned to prison] over my head — not because of something I’ve done, which I understand — but because of the pandemic [emergency period ending].”

Nonetheless, she carried on with rebuilding her life, including signing up for a five-week-long computer class. Under home confinement and electronic monitoring, all movement out of the house must be preapproved by federal officials. Levi obtained approval and thought that it was for all of the five weeks.

Members of The National Council, Life After Release, Maryland Justice Project and Out for Justice demonstrate outside of the Department of Justice on behalf of Gwendolyn Levi and the more than 4,000 people released under the CARES Act, on June 30, 2021.Sharon Smith / The National Council

On June 12, 2021, during her third week of class, she learned otherwise. That morning, federal officials were alerted by her ankle monitor that she was not at home. Levi had turned her phone off during class and did not answer their calls. She returned home by 1:17 pm that afternoon, but federal officials logged the incident as an escape. She was arrested and sent to a Washington, D.C., jail, where she spent several weeks facing the possibility of being locked away from her family for the next seven years.

During that time, advocates — including formerly incarcerated women with the National Council and the Maryland Justice Project — organized to demand her release. Within two days of her arrest, approximately 50 people traveled to Washington, D.C., to rally outside the Justice Department. They worked to attract media attention and public outrage.

Samantha Masters and Skylar Mundell demonstrate on behalf of the more than 4,000 people released under the CARES Act.Sharon Smith / The National Council

On July 6, a federal judge reduced Levi’s sentence to time served. In her ruling, Maryland U.S. District Court Judge Deborah K. Chasanow noted that Levi had done well during her year out of prison. “Because of her release to home confinement, the most pressing initial concerns (COVID, age, and health) were addressed,” Chasanow continued. “The court concludes that it would do little (if anything) to serve the goals of sentencing to require her to return to full custody.”

The decision freed Levi from the threat of being returned to prison, but she knows that same threat hangs over the heads of the nearly 4,500 others released under the CARES Act. “What are people supposed to do? Hope that the pandemic never ends so we can keep our freedom?”

She has expanded her advocacy to include speaking out against the proposed re-incarceration of those thousands — and speaking out to help build momentum that will push President Joe Biden, who campaigned on a promise to end mass incarceration, to rescind the memo and grant commutations (shortening prison sentences). “There are people who reunited with their children and families that they haven’t seen for years. You’re just going to snatch them away?”

“The pandemic is not over,” Andrea James, co-founder of the National Council for Incarcerated and Formerly Incarcerated Women and Girls, told Truthout. “Prisons and jails are petri dishes in this horrible pandemic.”

Seven months into office, the Biden administration has yet to grant any clemencies.

When Biden was elected, the Council, which had pushed the Obama administration to grant clemencies to women serving draconian federal sentences, renewed their clemency efforts, calling on the new president to commute the prison sentences of 100 women during his first 100 days in office.

“Some really easy clemencies would have been people already out [of prison] under the CARES Act,” James said. James and other members of the National Council have participated in several phone calls with Biden’s transition team and then his administration about criminal justice reform. She recounts that, in these calls, they stressed decarceration. “It’s about the liberation of our people, not prison reform,” James said, noting that many are serving lengthy sentences meted out during the height of the war on drugs.

Seven months into office, however, the Biden administration has yet to grant any clemencies, either in the form of a commutation (the shortening of a prison sentence) or a pardon (which expunges a conviction).

James is outraged by the Biden administration’s decision to send people back to prison once the pandemic is no longer considered an emergency.

Although they’ll continue pushing for clemency, advocates are not waiting for Biden to come through on his promises. James notes that lawyers with the National Council, in conjunction with a coalition of other attorneys, have been filing motions in federal court asking that judges follow Chasanow’s example and resentence people to time served, thus preventing their return to prison.

In Texas, Marquez is praying for clemency, not only for herself, but for all others who have been convicted on marijuana charges. “Now, marijuana is legal in 19 states for recreational use and in 36 states for medicinal use,” she said.

Marquez has not told her 91-year-old mother about the Justice Department memo or the threat hanging over her head. “I don’t want to let her know that they want to send me back to prison,” she explained. Since her release, she has not yet been able to visit her mother, who lives in Nebraska and whose health makes travel impossible, or her 13 other grandchildren or two great-grandchildren, all of whom live in the Midwest.

“I would like to be reunited with the rest of my family,” Marquez said. And, once she gains her freedom, she wants to advocate for others the way that the National Council and other organizations are advocating for her.