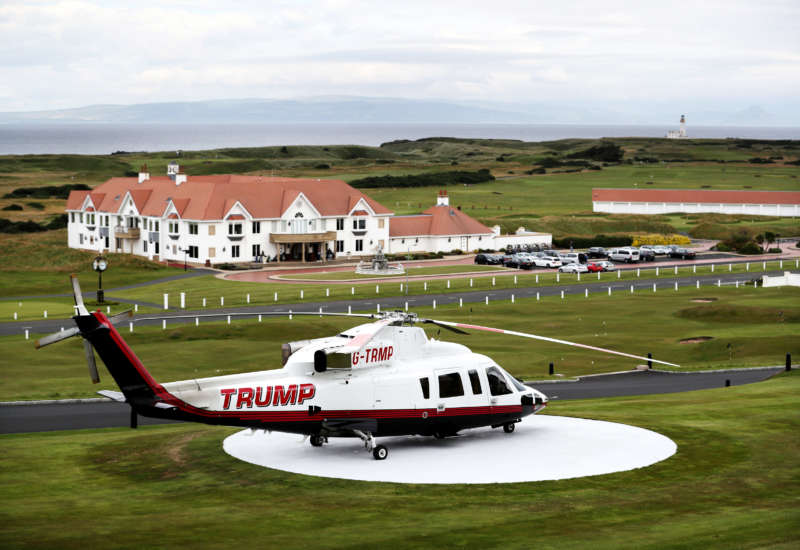 In Scotland, Weisselberg’s name was removed from Trump’s Aberdeen golf club last week. But Weisselberg is still listed as a “person with significant control” over Golf Recreation Scotland, the parent company of Trump’s Turnberry resort, as of July 20. The other person with significant control is Donald Trump Jr., while Trump’s other adult son, Eric Trump, remains the sole director of the company.

The Trump Turnberry golf club generated around $100 million in income reported by Trump during his time in the White House, making it the biggest revenue generator of Trump’s properties during his presidency.

Trump’s other Scottish golf club in Aberdeenshire is operated through Trump International Golf Links, which also removed Weisselberg’s name from corporate records last week. Trump reported more than $16.5 million in income from the Aberdeenshire golf resort through Trump International Golf Links Scotland since 2016, substantially less than Turnberry but more than many other foreign businesses. Overall, Trump reported bringing in more than $134 million from his businesses in Scotland since 2016.

While Trump’s properties in Scotland may seem lucrative since personal financial disclosures show him personally raking in more income from them than businesses in any other foreign country, Trump’s Scottish businesses are also some of his biggest money-losers, according to records reveiwed by OpenSecrets.

Corporate records on file with the U.K. government show the two Scottish golf clubs losing millions of dollars each year and relying heavily on loans from Trump.

In 2006, Trump bought the land for the Aberdeenshire course for $12.6 million in cash and has loaned the golf club another $58.6 million in the last 15 years. In 2014, Trump bought Turnberry for $68 million and has reported loaning it $150 million since the initial purchase.

The Scottish Green Party and international human rights group Avaaz called for an “unexplained wealth” order in February amid questions about how Trump financed the purchases of the Scottish courses. The groups claimed Trump’s “unusual” pattern of spending and the ongoing legal issues in the U.S. gives Scottish authorities grounds to investigate.

Following statements from First Minister Nicola Sturgeon, Scotland’s leader, claiming that decisions on “unexplained wealth” orders should be made by law enforcement officials, Scotland’s Parliament voted against a proposal to urge an investigation into the finances of Trump’s Scottish golf courses.

The U.K. government introduced the “unexplained wealth” orders in 2018 to help investigations into money laundering and other criminal financial activity with the goal of keeping international criminals from making large investments in Scotland with “dirty money.”

Eric Trump claims the allegations have “no basis in fact”.

The former president released a statement over the weekend expressing disappointment that the149th British Open Championship took place in Kent, England, claiming “the greatest site and course of all for The Open is Turnberry, in Scotland,” which the Trump Organization has owned since 2014. After the Jan. 6 Capitol attack, British Open organizers announced they will not hold the golf tournament at Trump Turnberry “for the foreseeable future.”

The golf tournament was last held at Turnberry in 2009, prior to Trump’s 2014 purchase, though the Scotland golf club hosted the Women’s British Open in 2015.

Like Trump’s Scottish golf clubs, Trump’s business in Ireland is similarly among the top revenue generators reported in financial disclosures but has reported millions in losses each year. Trump’s golf club in Doonbeg, Ireland, generated more than $69.8 million in revenue for him since 2016, OpenSecrets’ analysis found.

Overall, Trump brought in more than $230 million in revenue from his interests in foreign countries since the start of his 2016 presidential bid, OpenSecrets’ analysis of data from personal financial disclosures on file with the U.S. Office of Government Ethics shows.

Since personal financial disclosures report most income in ranges, details about Trump’s exact profits are hidden from the American public.

The former president’s foreign business dealings raised questions among some constitutional scholars and ethics experts since the Constitution’s Emoluments Clause bars sitting presidents from accepting payments from a foreign government without approval from Congress.

Income from many of Trump’s foreign business assets tapered off with each passing year of his presidency, but other Trump businesses’ annual revenue grew during his time in the White House.

Trump made more than $458,000 from business in the United Arab Emirates in 2020, a higher amount than any of the four prior years of his presidency and following an upward trend with growing annual revenue the prior three years, OpenSecrets’ analysis of personal financial disclosures shows.

The UAE golf club was promoted by foreign agents in materials distributed for the Dubai Department of Tourism during his time in the White House and Emirati foreign interests revved up lobbying spending during the Trump administration, spending more than $100 million on foreign influence operations targeting the U.S. since 2016, more than $23 million of that in 2020 alone.

Income from business interests in Turkey reported by Trump topped $1.3 million since 2016 and may have been as high as $9 million with up to $1 million in 2020 revenue alone. Turkish businessman Mehmet Ali Yalcindag helped negotiate the licensing deal for Trump’s properties in Turkey and went on to lobby Trump’s administration on behalf of the Turkey-U.S. Business Council.

Personal financial disclosures show Trump brought in upwards of $3.4 million from business interests in India since 2016.

The foreign financial entanglements were not limited to his business interests overseas. Representatives from at least 33 foreign governments visited Trump’s D.C. hotel since Trump was elected president, according to 1100 Pennsylvania.