Many Major Corporations Have Done Almost Nothing to Defend Voting Rights 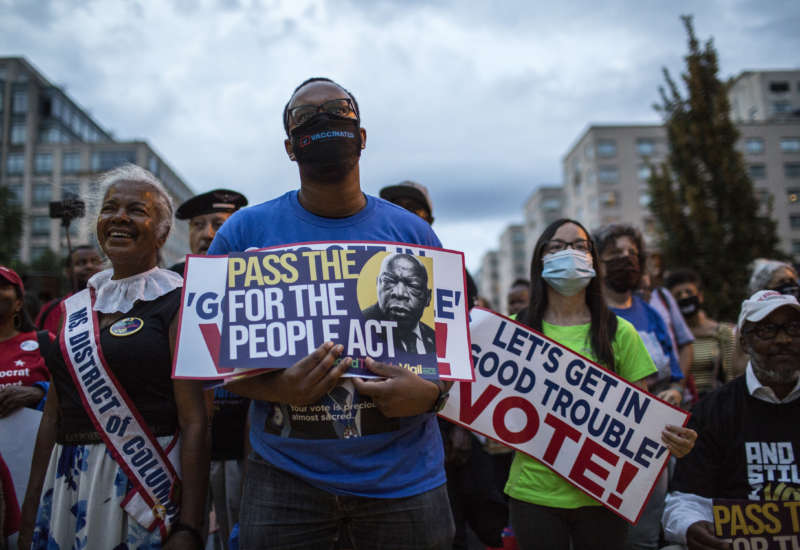 Big brand name companies usually try to create an impression that they stand for something besides simply making money. They often want to be perceived as having a social conscience and sharing the same values as their customers. But when it comes to standing up for their customers’ abilities to participate in the democratic process by easily voting, many companies have failed in recent months to take any action or even speak out.

As states have begun passing bills that will make it more difficult for people to vote, companies have been under pressure to stake out a position. More than a hundred businesses signed onto a letter endorsing the John Lewis Voting Rights Advancement Act, which would restore parts of the Voting Rights Act that were struck down by the Supreme Court, and others signed a pledge in support of the For the People Act, which would enhance voting access, prevent partisan gerrymandering, and more.

More than a dozen major brands have not done anything to stand up for voting rights, while in many cases directing PAC money to the state politicians behind the anti-voting bills, according to an analysis and scorecard from Greenpeace.

Companies that scored ‘Fs’ on the voting rights scorecard include:

Scoring an ‘F’ on the analysis means the company has not signed statements in support of legislation to protect voting access, opposed the U.S. Chamber of Commerce’s position against the For the People Act, responded to Greenpeace’s letter of recommendations on how to protect voting rights, or taken any other pro-voting rights action.

Several of the failing companies have also been top PAC donors to the sponsors of the state anti-voting bills, Greenpeace found by analyzing contributions data from 2019 to the present for state house members and senators elected in 2020 and from 2017 to the present for those elected in 2018. Tobacco company Altria tops the list, having given more than $110,000 to the sponsors via its PAC, while companies in the top 10 include Anthem Blue Cross, Comcast, AT&T, Verizon, Dominion Energy, UnitedHealth Group, American Electric Power, and Reynolds.

According to the Brennan Center for Justice, 17 states have enacted 28 new laws that restrict voting access as of June 21, and more anti-voting bills are likely to be enacted this year. Most of the bills could make voting by mail more difficult by shortening the timeframe for voters to request mail ballots, limiting how mail ballots can be delivered, or imposing new ID requirements for mail ballots. Other laws could make in-person voting more difficult by requiring IDs, reducing early voting hours, and limiting the number of polling places.

The restrictive voting laws are generally believed to provide electoral benefits to Republican politicians, who typically benefit from low voter turnouts. Republicans tend to favor business-friendly policies on taxes and regulatory matters that may help the failing companies collect more profit in the coming years.