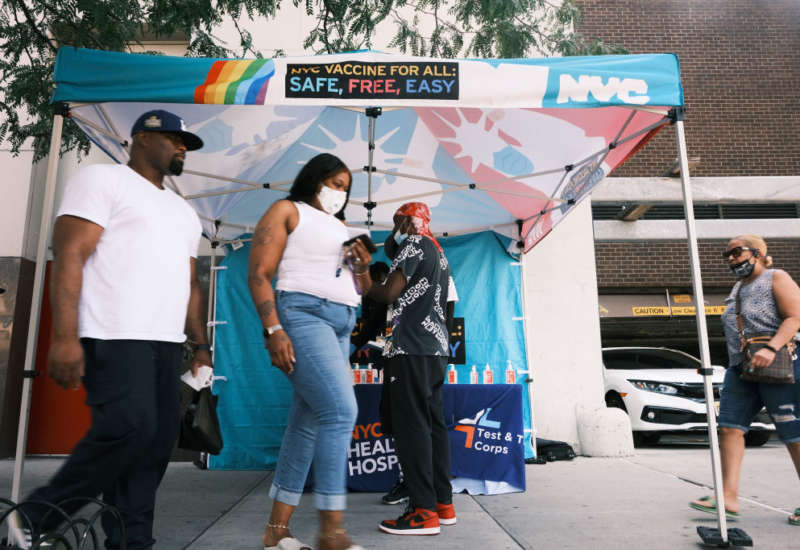 The city of New York will require proof of vaccination for those dining in indoor restaurants and using indoor gym facilities, Mayor Bill de Blasio announced at a press conference on Tuesday.

The requirements come as the nation continues to grapple with rising rates of coronavirus. With vaccinations having stagnated in recent weeks, and the Delta variant posing a greater risk to individuals (particularly those who are not vaccinated), total COVID case numbers across the country have increased by 142 percent, with hospitalizations having gone up by 83 percent, in the past two weeks.

In New York City, where 55 percent of the population is fully vaccinated, case numbers have increased by 135 percent, and hospitalizations are up by 36 percent, in the same two-week period.

To address these concerns and to encourage more people to get vaccinated, Mayor de Blasio said it was imperative to limit who can go to some public spaces.

“It is time for people to see vaccinations as literally necessary to living a good, full and healthy life,” the mayor said on Tuesday. “If you’re unvaccinated, unfortunately, you will not be able to participate in many things.

“If you want to participate in our society fully, you’ve got to get vaccinated,” de Blasio added.

The requirement to be vaccinated in order to dine in or go to gyms in New York City will not be implemented right away, and will follow a transition period, city officials have said. The program, called “Key to NYC Pass,” will begin in mid-August. Full implementation and enforcement of the program is slated to begin the week of September 13.

Polls on the subject of requiring proof of vaccinations have shown mixed feelings among Americans. A Gallup poll published in May, for example, asking respondents if they would support implementing vaccination requirements for a range of activities found that 57 percent supported it for air travel and 55 percent for events with large crowds. When it came to dining in at restaurants, however, support dropped off sharply with only 40 percent saying vaccine requirements should be implemented.

It’s possible that attitudes toward vaccine requirements may have changed, given the prevalence of the new Delta variant and increases in hospitalizations across the country, especially among the unvaccinated. Indeed, a poll from The COVID States Project, conducted from June 9 through July 7, found that in general 64 percent of respondents would approve of requiring everyone to get vaccinated.

Other parts of the country that are being hit harder than New York City are responding to the latest coronavirus surge in other ways. In Louisiana, a state that has seen its COVID-19 hospitalization rates increase by 182 percent in the past two weeks, Democratic Gov. John Bel Edwards reinstated a mask mandate he had ended less than three months ago.

“This is bad. And it’s not this bad anywhere else in the country today,” Edwards said in a statement announcing the reinstated mandate. “This is having an adverse impact on people’s lives today. And the least we can do is put a mask on. It is not an onerous burden.”

Why “Natural Immunity” Is a Political Problem for the Regime

Vaccine Mandates: Who Will Comply, and Why?