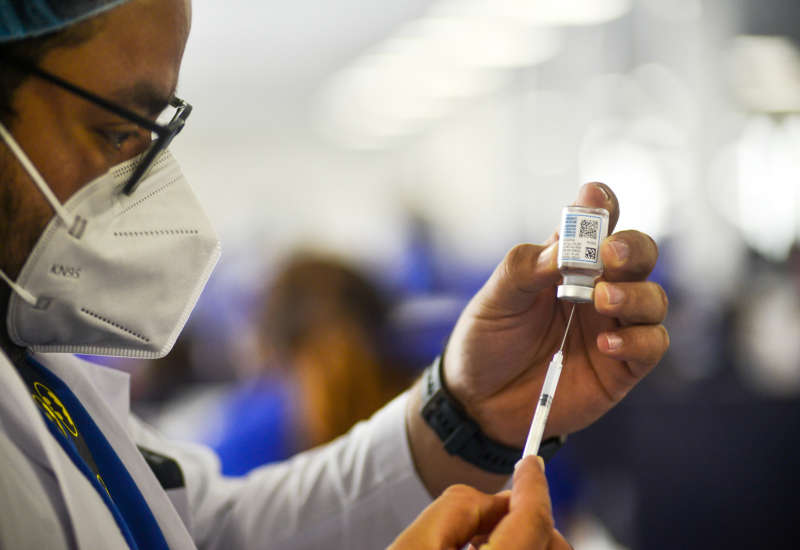 With some of the world’s wealthiest countries continuing to oppose temporary patent waivers for Covid-19 vaccines in order to more rapidly deploy life-saving shots worldwide, pharmaceutical giants Pfizer and Moderna have raised the price for European Union orders.

In its new supply contract with the E.U., Pfizer named a price of more than $23 per dose, up nearly 25% from about $18 on earlier purchases. Moderna said in its latest agreement that its mRNA vaccine will cost one-tenth more than its previous price, charging $25.50 per dose.

The two companies plan to provide the E.U. with 2.1 billion vaccine doses until 2023, and are already expected to rake in tens of billions of dollars this year from vaccine sales.

“Capitalism never fails to not surprise,” tweeted The New Yorker writer John Cassidy in response to reporting from the Financial Times.

With patent protections kept in place by the World Trade Organization (WTO) as E.U. countries including Germany, Switzerland, and the United Kingdom oppose lifting Trade-Related Aspects of Intellectual Property Rights (TRIPS) for Covid-19-related products, vaccine doses have mainly been available in wealthy countries.

According to the New York Times‘ latest analysis, 0.3% of doses have been administered in low-income countries, leading public health experts to warn that Covid-19 will continue to mutate and dangerous, highly infectious variants like Delta will continue to emerge and spread throughout the world.

The companies are raising their prices “just in time for the Delta variant,” one observer wrote on Twitter.

Pfizer and Moderna have raised their prices as Europe faces supply chain issues with the Johnson & Johnson and AstraZeneca vaccines — the latter of which has been more widely available in low-income countries — and as new studies showed higher efficacy of the mRNA vaccines compared to the cheaper shots.

An official involved in the price negotiations told the Financial Times that Pfizer and Moderna used the “usual pharma rhetoric” in discussing the price hikes.

“Vaccines work so they increased the ‘value,’” the official said.

“E.U., care to rethink your position on a patent waiver?,” tweeted Nick Dearden, director of Global Justice Now, which has been calling for the WTO to lift patent protections for Covid-19 vaccines for months.

Yet the EU/UK and others continue to block a #TRIPSwaiver waiver that would suspend the very tool, IP, that enables and supports this monopoly.

Our Govts are complicit in this heist by pharma and companies across the board in other sectors. It’s the system they helped create. https://t.co/hoNryp86hg

“Our governments are complicit in this heist by pharma and companies across the board in other sectors,” Amin said.