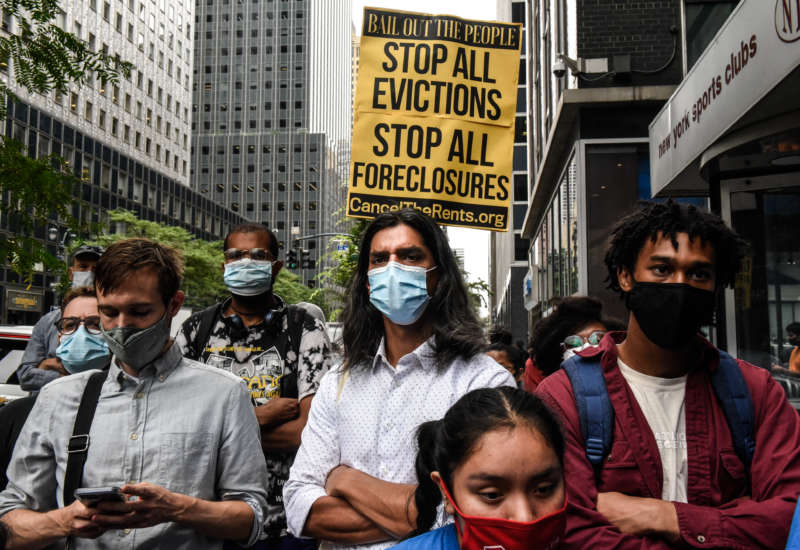 While the eviction moratorium set in place for the pandemic likely saved millions of renters from being evicted and potentially experiencing homelessness, the real estate industry was focused on its profits — and was willing to spend millions of dollars to protect their profit margins.

A new report from OpenSecrets finds that, over the past year and a half, the real estate industry has spent over $100 million on lobbying. Though financial disclosures don’t specify the purpose of the lobbying funds, the efforts were likely in large part to get the eviction moratorium overturned or not renewed.

After a stunning protest led by Rep. Cori Bush (D-Missouri), and at the urging of other progressive lawmakers, President Joe Biden announced this week that the Centers for Disease Control and Prevention (CDC) would be implementing a new eviction moratorium for two months. Bush and other advocates had protested against the Biden administration and Congress allowing the moratorium to end at the end of July.

“On Friday night, I came to the Capitol with my chair. I refused to accept that Congress could leave for vacation while 11 million people faced eviction,” tweeted Bush on Tuesday, after Biden announced the extension. “For 5 days, we’ve been out here, demanding that our government acts to save lives. Today, our movement moved mountains.”

The real estate industry has been pushing for over a year to overturn the eviction moratorium, filing lawsuits and donating to GOP lawmakers to help their cause. The National Association of Realtors spent $84 million on lobbying in 2020 — more than it ever has in one year — according to OpenSecrets.

All the while, real estate groups have been complaining of how much the moratorium was costing them, even though top financial and real estate firms have reported high or stable earnings in the first quarter of 2021.

While real estate agents worried about their profits, housing advocates warned that, if the eviction moratorium was to end, millions of people could be affected. Many of these renters would also be at risk of experiencing homelessness.

In a court case filed by an Alabama real estate group earlier this year, the Supreme Court ruled that the CDC’s moratorium could stay in place, but only until the end of July. The new eviction moratorium is written differently from the previous order and made to specifically address areas that are being hit hard by COVID and the Delta variant of the virus. As a result, it’s estimated to cover about 90 percent of the U.S. population.

The new wording circumvents the Supreme Court’s previous ruling, but is already facing a new challenge in court. Just one day after Biden announced the new moratorium, state real estate associations, with the backing of the National Association of Realtors, filed another lawsuit claiming that the ruling is an overstep by the CDC.

They claim in the lawsuit that the agency, in implementing a policy that could help keep millions of families housed and protected from the virus, “caved to political pressure.” They do not acknowledge that the new moratorium is written to be more specific to the pandemic.

Democratic leadership, meanwhile, have praised the new moratorium order and have thanked Bush for her work in influencing the White House.

Video: Fauci Says ‘People Who Don’t Like Me Are Conspiracy Theorists, Deny Reality’

Video: Fauci Says ‘People Who Don’t Like Me Are Conspiracy Theorists, Deny Reality’