Journalist Removed From McCarthy Presser Over Question on Jan 6 Commission 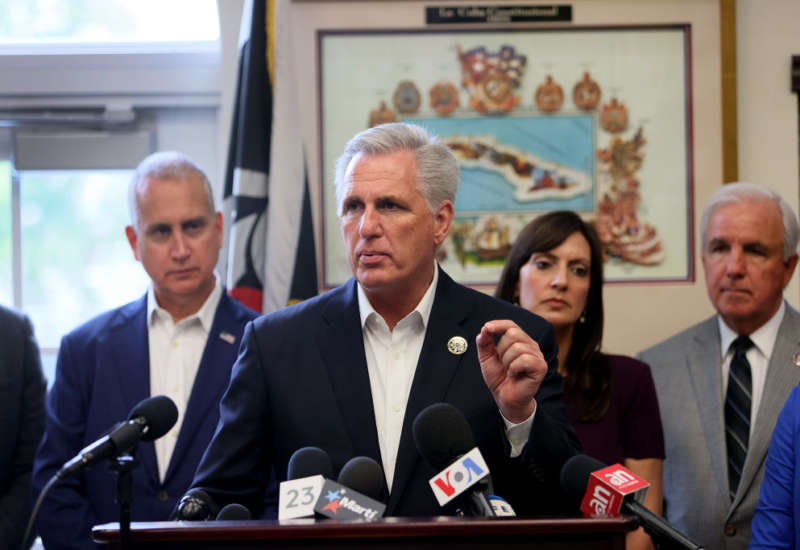 A journalist was forcibly removed from a press conference being held by House Minority Leader Kevin McCarthy (R-California) on Thursday when the reporter asked the lawmaker why he still opposed a commission to investigate the violence that took place at the U.S. Capitol building earlier this year.

The press conference, which took place in Florida, was addressing issues related to Cuba. McCarthy had just finished a response in which he said Cuban leaders had created tyranny for people in the island nation.

Grant Stern, a radio broadcaster and executive director of the progressive organization Occupy Democrats, then asked McCarthy a question related to democratic freedoms.

“Minority leader, you said that the … revolution created tyranny on the island of Cuba and I am asking you a question,” Stern asked. “It’s not a Democratic or Republican issue, so why do you oppose the January 6th commission, sir?”

But midway through that question, Stern appeared to be forcibly removed from the press conference, as video posted by Stern showed on social media. According to Stern, four police officers, prompted by McCarthy’s staffers, physically lifted him out of the room as he was asking McCarthy his query.

I tried to ask @GOPLeader McCarthy a question after he decried Cuban police pickup up people in the streets.

Why does he oppose the bipartisan #January6thCommission?

A Congressional staffer had four cops pick me up and drag me from the room.

I still asked the question. pic.twitter.com/HDqrhvARaC

In an email to The Independent, Stern said he couldn’t “understand why” McCarthy was discussing “freedom to hold elections in Cuba,” but was unable to discuss the January 6 attack on the Capitol by loyalists to former President Donald Trump, which was an attempt to disrupt the certification of the United States’ 2020 elections.

The journalist also questioned why McCarthy didn’t stand up for Stern’s own democratic freedoms in the press conference itself.

“When he saw me being dragged away, why didn’t he speak up and stop it?” Stern asked.

McCarthy has taken a firm position against investigating the events of January 6, but he didn’t always hold this opinion. Days after the attack on the Capitol, in which five individuals lost their lives, the House Minority Leader, though opposed to impeaching Trump, said the president he played a role in the violence of that day.

Trump “bears responsibility for Wednesday’s attack on Congress by mob rioters,” McCarthy said in comments he made on the House floor. “He should have immediately denounced the mob when he saw what was unfolding.”

In the same speech, he also called for the formation of a “fact-finding commission” to investigate what happened, rather than taking steps to impeach Trump.

In the months since those comments, however, McCarthy has drastically altered his position, opposing the formation of a commission at every turn. In May, for instance, McCarthy opposed a bipartisan plan to form a commission, which would have allowed for an equal number of Democrats and Republicans to take part.

After that plan was blocked in the Senate by a Republican filibuster, McCarthy then opposed, through his various actions, the creation of a select committee formed by Democrats in the House.

McCarthy has also peddled falsehoods and disinformation about the attack on the Capitol. In recent weeks, he has wrongly claimed that Speaker of the House Nancy Pelosi (D-California) is to blame for what happened that day, arguing she had not secured the Capitol well enough during the certification process.

Pelosi is not in charge of the security of the Capitol building, as numerous media fact checks have noted.