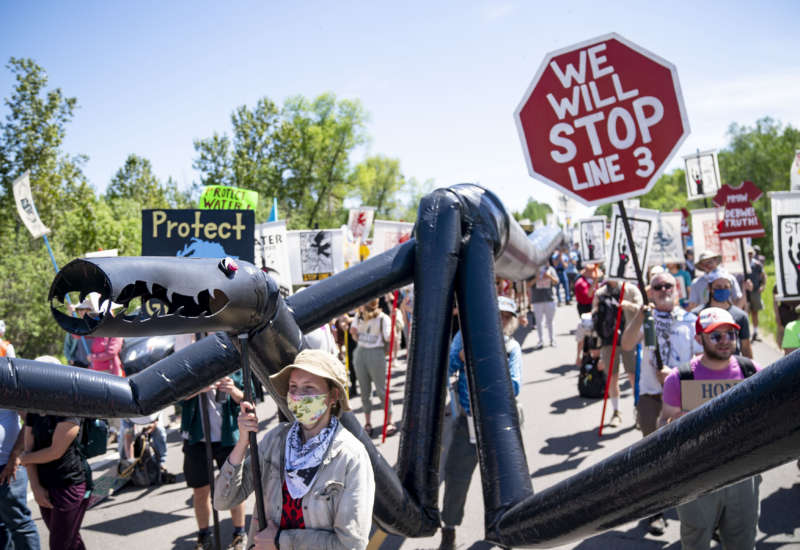 St. Paul, Minnesota – Almost all records held by Minnesota’s Bureau of Criminal Apprehension (BCA) related to the environmentally harmful Enbridge Line 3 tar sands oil pipeline are classified as secret, according to memos provided to Unicorn Riot as part of a denial of public records requests. The BCA investigates crime scenes and police shootings, and also runs the Minnesota Fusion Center.

A designation memo from the Minnesota Department of Safety (DPS), dated January, 16, 2019, declares a wide swath of BCA data as secret under the designation of “security information.”

Fusion centers are controversial intelligence hubs created around the USA during the explosion of unchecked domestic surveillance programs after the September 11, 2001 attacks and passage of the PATRIOT Act. They serve as information sharing points for local, state, and federal police as well as private security firms and corporations.

Fusion centers are regularly implicated in monitoring political activities and cultural events that are supposed to be protected under the First Amendment. They’ve also been shown to cite right-wing conspiracy websites like Infowars as if they were reliable sources of intelligence. A 2012 Senate investigation found that during their first decade of existence, fusion centers produced “shoddy, rarely timely” reports and never discovered or helped stop any terrorist activity.

Another security designation letter from DPS Commissioner Harrington, signed on December 29, 2020, ‘Determination Of Classification And Authorization For Sharing Of Data Related To The Line 3 Replacement Project‘, was also provided as justification for the BCA’s denial of Line 3-related public records requests. It classifies any “data regarding deployment or utilization of BCA personnel or resources in support of Line 3 Replacement Project-related security operations” as secret “security information.” This specifically includes any data regarding Line 3, or people protesting against Line 3, collected by the Minnesota Fusion Center.

The “deployment or utilization of BCA personnel or resources in support of Line 3 Replacement Project-related security operations” isn’t limited to the fusion center operations; BCA agents have been on site at at least one direct action blockade against Line 3 construction – on the night of June 7th. As officers worked to cut water protectors out of lockboxes attached to a boat blocking access to the Line 3 Two Inlets Pump Station in Hubbard County, a BCA employee wearing a polo with the agency’s logo was spotted at the scene. When asked what his name and job title was, the man refused to specify, only stating that he was with the BCA.

Harrington’s security determination claims that releasing any Line 3 data from the BCA would create security threats by “making such information available to those who would create public safety hazards, or participate in criminal or terrorist activity.” (Line 3, a massive fossil fuel project by Canadian energy giant Enbridge, is opposed by numerous Indigenous tribes whose treaty land the pipeline route crosses. It threatens many sensitive waterways with potential oil spills and Enbridge is taking millions of gallons of water from local rivers for pipeline drilling during a historic drought.)

The newer security declaration says all described documents are to be kept secret “until the completion of all Line 3 Replacement Project construction activities, or the cessation of related security operations, whichever is sooner.”

Pipelines that have faced popular opposition, such as the Dakota Access Pipeline, may be patrolled by police and private security long after construction is complete. MN DPS and BCA officials did not respond to a request for comment about when Line 3 records held by the BCA would ever become public or if the “security information” designation could be extended if security patrols along the pipeline were to continue indefinitely.

Under section 13.37 of the Minnesota Government Data Practices Act, law enforcement agencies may classify certain documents as “security information” if they want to avoid releasing certain data to someone filing a public records request. Under public records laws across the U.S., all government documents are generally assumed to be the property of the American people unless proven otherwise.

Minnesota Fusion Center data classified as “security information” may be shared with other law enforcement and government agencies both inside and outside Minnesota, as well as other Fusion Centers around the country, according to Harrington’s December 2020 memo. The designation letter also states fusion center data hidden from public view may also still be given to “owners, operators, and/or providers of critical infrastructure” (likely including Enbridge).

Police in Minnesota have faced legal challenges from protesters who allege authorities collaborate with Enbridge to violate their constitutional right to protest against Line 3.

Minnesota cops may in fact have a conflict of interest when it comes to the pipeline, as Enbridge has been heavily funding police and sheriffs who respond to anti-pipeline protests. The pipeline company has paid over $1.6 million thus far to state and local law enforcement via an escrow account managed under the auspices of MN DPS. BCA officials did not respond to an email asking if BCA itself has received any Enbridge escrow money.

DPS Commissioner Harrington, who signed both declarations declaring Line 3 BCA data secret, is no stranger to political surveillance that raises civil liberties concerns. He was once the police chief in Saint Paul, where he oversaw the installation of an extensive video surveillance grid in preparation for anti-protest crackdowns during the Republican National Convention (RNC) in 2008. Infiltrations and mass arrests of activist groups in St. Paul drew intense criticism after the RNC, and fusion centers in multiple states were involved in the political repression campaign.

During George Floyd protests in May 2020, Harrington said at a press conference that DPS would be running “contact tracing“ on those arrested during the uprising. Under his purview, Minnesota law enforcement can be expected to continue secretive surveillance of Enbridge’s opponents while their agencies collect pipeline money.

The Minnesota Fusion Center was formerly named the Minnesota Joint Analysis Center (MnJAC). Its 36-page official privacy policy dated March 4, 2021, describes three main types of operating files it uses: “BCA Case File“, “Request for Information” (RFI) which can only be answered with an “appropriate predicate“, and “Suspicious Activity Report” (SAR) which are generated by law enforcement entities or private security working with “Critical Infrastructure and Key Resource” (CIKR) businesses that have passed reports to local law enforcement. The current policy claims that SAR reports that do not meet the “reasonable suspicion threshold” will be retained for one year. Two private actors, the Mall of America and Xcel Energy, are named as ‘participants’ rather than external partners in the fusion center.