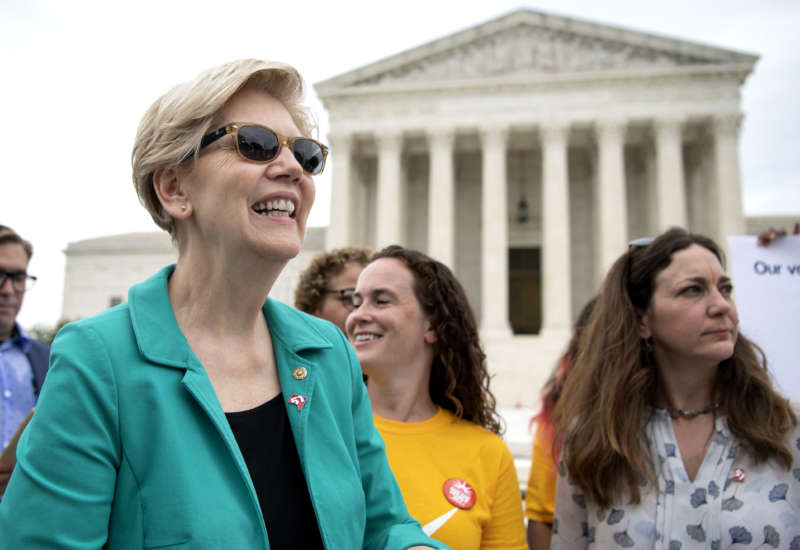 Sen. Elizabeth Warren (D-Massachusetts) introduced a bill Tuesday that would create a tax on corporate profits that she says could help raise hundreds of billions of dollars of revenue for the government.

The bill, called the Real Corporate Profits Tax Act of 2021, would levy a 7 cent tax on every dollar of profit above $100 million that corporations report to their shareholders, otherwise known as their book income. It’s the same proposal that Warren had introduced during her presidential campaign in 2019.

The tax proposal is aimed at ensuring that corporations pay taxes on their income even if they’re able to avoid taxes elsewhere. Levying the tax on their book income as opposed to the income that they report to the government could help capture taxable income that a company may otherwise try to obscure from the government.

“Companies cannot be allowed to continue reporting billions in profits to shareholders and then turn around and pay nothing in taxes to the IRS. The American people know that’s wrong. People in Congress know that’s wrong. The President of the United States knows that’s wrong,” Warren said in a statement.

“The Real Corporate Profits Tax Act would end corporate double dealing and ensure they pay their fair share so that we can raise essential revenue needed to invest in families and our economy,” the senator continued. According to a press release on the bill, it would raise nearly $700 billion in revenue over the next decade.

Warren introduced the bill alongside Sen. Angus King (I-Maine) and Rep. Don Beyer (D-Virginia). It’s been cosponsored by Senators Jeff Merkley (D-Oregon), Ed Markey (D-Massachusetts) and Sheldon Whitehouse (D-Rhode Island). The lawmakers hope for the bill to be incorporated into the Democrats’ $3.5 trillion reconciliation package as a revenue raiser.

President Joe Biden had unveiled a similar tax proposal in the spring to levy a 15 percent tax on book income for a select few of the largest corporations in the U.S. to help pay for his infrastructure package. Nearly all of Biden’s tax proposals on corporations and the wealthy were cut from bipartisan negotiations on the package, however.

The lawmakers point out that corporations are often able to get away with paying little to no corporate income tax because of the many loopholes in the tax code and the very low statutory corporate tax rate. It enables corporations to paint a rosy picture about their profits to their shareholders, while at the same time withholding that information from the government.

In 2018, for instance, Amazon didn’t pay any federal income tax at all. According to an Institute on Taxation and Economic Policy report, a large swath of the nation’s largest corporations in fact were able to avoid paying taxes in at least one year between 2008 and 2015 — and that was back when the statutory corporate tax rate was 14 percent higher than it currently is after Republicans slashed the rate in 2017 under President Trump.

“Our tax code allows profitable companies to pay little or no tax because there are two sets of rules for reporting profits. When reporting to shareholders and potential investors, companies follow established financial accounting procedures to record their profits on their financial statements,” a fact sheet on the bill explains.

“When filing their tax returns, however, companies are able to exploit a host of loopholes, deductions, and exemptions to drive down their tax liability,” the fact sheet continues. “As a result, corporate giants that report billions in ‘book income’ on their financial statements – and tout these numbers in order to drive up their stock prices and CEO bonuses – can end up paying no income tax to the IRS.”

By creating a minimum tax on corporate book income, the lawmakers hope to create more airtight tax rules that could stop companies from skirting income taxes. The bill would apply to about 1,300 public companies and a host of other private companies, they estimate.

“In 1965, corporations paid roughly 4 percent of the nation’s GDP in state and federal income tax. Today, that rate is only 1 percent,” King said in a statement. “This massive decline has contributed to the nation’s rising debt and threatened basic public sector services Americans rely upon.”

How Jeep is going electric, with CEO Christian Meunier