Senate Passes Infrastructure Bill With Some GOP Support. Don’t Get Too Excited. 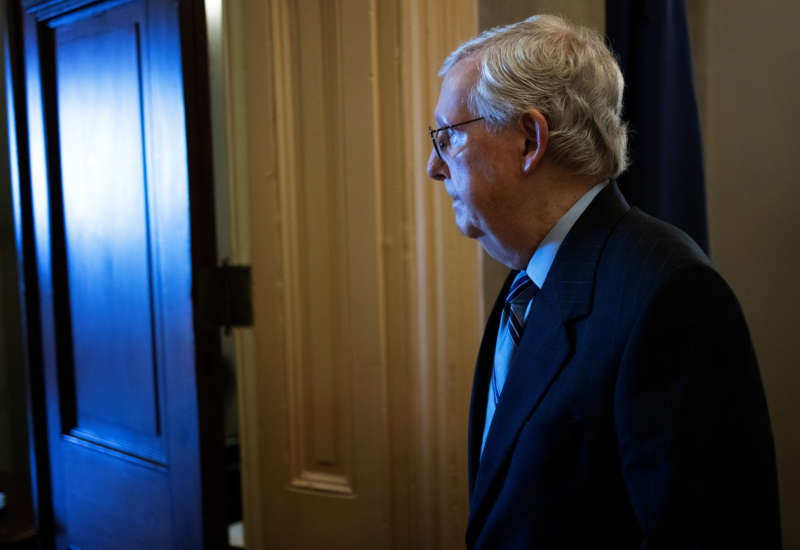 This first portion, a $1.2 trillion package aimed at modernizing the country’s moldering public works and power grids, passed the Senate today by a vote of 69 to 30. This is a significant step. The number of Republicans who voted “Yes,” including Minority Leader Mitch McConnell, is no surprise, despite the partisan strife that is our collective daily bread these days; 18 GOP senators voted with all 50 members of the Democratic caucus to evade the filibuster earlier in the process, and the bill itself is wildly popular across a broad spectrum of voters.

These people will go home for the August break soon, and are happy to have something in hand to prove they actually work for a living. After all, it’s Washington D.C.; the details of the bill matter far less than the fact of the bill’s passage. In this instance, the bill contains a fraction of what was originally proposed — the GOP won a number of legislation-shrinking victories here, including the removal from the bill of a plan to increase IRS attention on wealthy tax evaders — but after years of fruitless “Infrastructure Weeks” dating all the way back to the Obama administration, it represents a notable triumph for a first-year president.

“The legislation, which still must pass the House, would touch nearly every facet of the American economy and fortify the nation’s response to the warming of the planet,” reports The New York Times. That last bit is more than a bit exaggerated; while there are aspects of the bill devoted to addressing the beyond-urgent climate crisis, the best climate bits got shaved off in negotiations between conservative Democrats and conservative Republicans. Progressive lawmakers will attempt to salvage some (though not enough) of those elements within the $3.5 trillion second prong of the plan.

Don’t expect to see orange-vested workers driving shiny black steel jackhammers anytime soon, alas; this bill, like all things in Creation apparently, must bend to the vacation plans of Congress. The House is out of session until September, so Biden won’t have anything to sign for real until people are well into the argument about who should be playing quarterback for the Patriots.

For House Speaker Nancy Pelosi, this delay could prove to be a boon. House progressives are rightfully outraged by the volume of vital climate material that was left out of this first bill, and others within the caucus want both portions to be voted on simultaneously. Short version: Pelosi will almost certainly not recall the House to vote on these bills earlier than scheduled; this will give her time to square these sundry circles, hopefully in favor of the planet for a refreshing change of pace.

The $3.5 trillion second half — what Budget Committee Chairman Bernie Sanders on Monday called “the most consequential piece of legislation for working people, the elderly, the children, the sick and the poor since FDR and the New Deal of the 1930s” — is immediately next up on deck, and unless I miss my guess, the fur is going to fly on this one.

Minority Leader McConnell has made it plain that his entire caucus would gnaw off a limb before voting in favor of this massive, deeply progressive piece of legislation.

“For now, the Senate’s budget blueprint specifically paves the way for significant new spending on child care and education, as Democrats look to fulfill a promise to make community college free for two years,” reports The Washington Post. “The budget resolution also opens the door for lawmakers to extend a recent set of expanded federal tax credits that help families with children. Another bucket of spending would target the environment, addressing Democrats’ concerns that the bipartisan infrastructure deal would not go far enough to address issues related to the warming planet.”

Minority Leader McConnell has made it plain that his entire caucus would gnaw off a limb before voting in favor of this massive, deeply progressive piece of legislation. This puts the 60-vote filibuster threshold squarely back on the table, and in order to dodge it, Majority Leader Chuck Schumer will have to shepherd this thing to daylight by way of reconciliation: a narrow, budget-based process that requires only 51 votes for passage.

There are 50 votes in the Democratic caucus, with Vice President Kamala Harris serving as the tie-breaking vote from her role as president of the Senate. Schumer does not need any Republican votes … unless Joe Manchin, or Kyrsten Sinema, or Jon Tester, or some other right-bent Democrat decides to go sideways and vote with McConnell and the Republicans. In the absence of any GOP votes in favor, such an act would all but doom the measure. If it does pass, this second-half bill would also be sent to the House, where it would face the same slate of travails as the first.

Oh, P.S.: Hovering over it all is the fact that McConnell is threatening to obliterate the U.S. economy to get his way, again. We saw a lot of this in 2011, when Republicans took the debt ceiling hostage while trying to thwart the Affordable Care Act. They ultimately failed, but the mere threat was enough to rattle the economy’s cage and proved to be a setback to the recovery after the financial Armageddon of 2008.

Why is this McConnell threat dangerous and reckless? The debt limit isn’t about spending more money, but is about promising to make good on what we’ve already spent. It is the “full faith and credit” of the federal government itself, and if that is allowed to be abrogated, it would cause a global economic earthquake in the middle of a growing pandemic while a great deal of the joint is either on fire or under water. Bad timing, thy name is Mitch.

“The Treasury Department has already begun deploying ‘extraordinary measures’ to fund the government’s obligations,” reports CBS News. “The Congressional Budget Office has said the government could run out of cash by October or November without an increase or suspension of the debt limit.”

As Esquire blogger Charles P. Pierce is wont to say: “This is your democracy, America. Cherish it.”