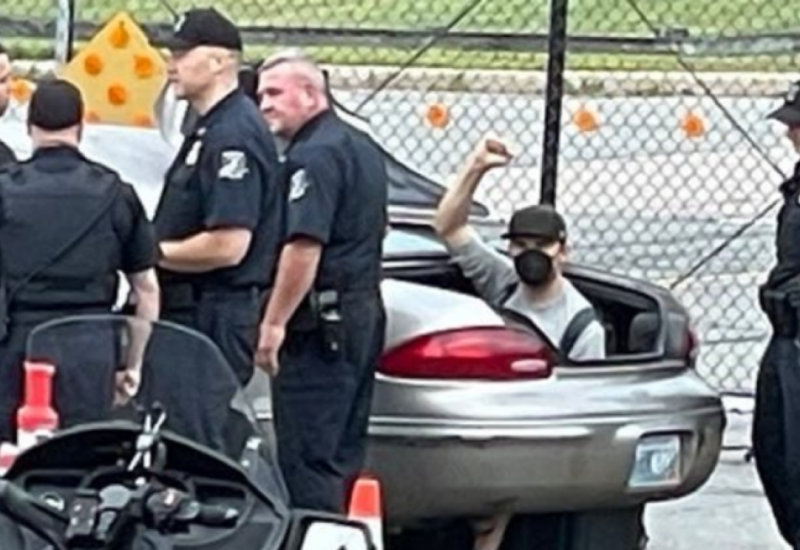 A group of anti-war activists blockaded the entrances to a Raytheon facility in Portsmouth, Rhode Island on Thursday morning to protest the role the weapons-maker plays in the killing of civilians in Yemen, the occupied Palestinian territories, and elsewhere around the world.

The demonstration was organized and live-streamed on Facebook by Resist and Abolish the Military Industrial Complex (RAM INC) and The FANG Collective, a direct-action organization based in Pawtucket, Rhode Island. (Watch the stream here.)

In a statement, The FANG Collective pointed to a 2018 CNN report revealing that Raytheon — the second-largest military contractor in the world and the largest producer of guided missiles — manufactured bombs and other munitions that the U.S.-backed, Saudi-led coalition used to kill dozens of women, children, and other civilians in Yemen.

“Raytheon also has close ties to the Israeli military and supplies them with missiles, bombs, and other equipment, including the ‘Iron Dome’ system,” the group said. “These weapons have been linked to dozens of attacks that have killed and injured civilians.”

One person has been extracted from the vehicle, and loud machinery can be heard from the other. The entrances are still blocked. It has now been 3 hours. pic.twitter.com/bdrH76nZND

Two protestors at the Portsmouth facility attached themselves to cars to obstruct the entrances as others chanted “shame on Raytheon!” and held banners that read “Raytheon Profits From Genocide.” Police officers soon arrived on the scene and extracted at least one of the protesters from a car, towing it away.

“Raytheon profits from the killing of civilians, families, and children in Palestine, Yemen, and elsewhere,” one of the demonstrators said. “We can’t sit idly by while Raytheon engineers new and more destructive ways of killing innocent people. Raytheon must be stopped and held accountable.”