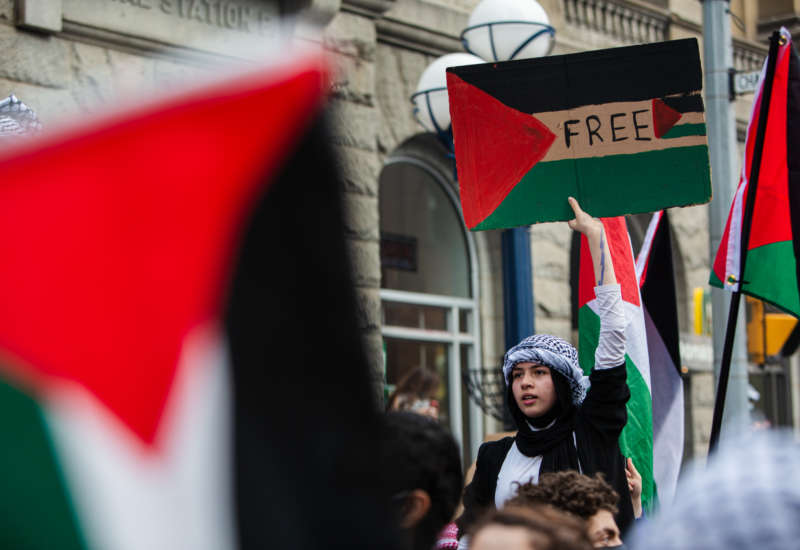 Last June, with the spectre of a COVID catastrophe looming over Palestinians, Canada’s largest private relief agency refused a $165,000 donation for emergency medical support in the Occupied Territories.

The rejected funds were the product of a months-long fundraising effort by the Canadian Palestinian Organizations Coalition (CPOC) and the CJPME Foundation: an independent charity launched by my human rights education and advocacy organization Canadians for Justice and Peace in the Middle East (CJPME), which is dedicated to “enabling Canadians of all backgrounds to promote justice, development and peace in the Middle East” in accordance with international law.

The groups approached World Vision Canada (WVC) about the donation last April, and were told by the director of Fragile and Humanitarian Programs that the relief agency was “definitely open” to discussing the “possibility of a partnership.”

Yet after two months of an initially encouraging back-and-forth, WVC announced that it would not be accepting the grant — even though World Vision staff on the ground in Palestine had earlier affirmed that “there is scope for more assistance in the health sector.”

“Assistance” is desperately necessitated, in fact, by the evisceration of the Palestinian health sector under Israel’s occupation policies and periodic military assaults, which have left hospital beds, ventilators, vital medicines, and access to clean water and electricity in perilously short supply.

In a subsequent meeting in October with the rejected donors, WVC CEO Michael Messenger explained that there was a previously unannounced organizational “freeze” on all external grants for the West Bank, Jerusalem and Gaza: an extraordinary condition, which he admitted applies exclusively to Palestine.

The decision to refuse the donation was not determined by general World Vision International policy, but at the discretion of the Canadian office. According to a recording of the meeting, Messenger acknowledged that the decision “came right up to [his] desk” and was made “on the fly,” impelled by a desire to “take a risk-averse approach” and “keep a lower profile during this time.”

According to Messenger, WVC implemented the freeze due to Israel’s ongoing prosecution of former World Vision Gaza Operations Manager Mohammad El Halabi, further compounding the injustice of the prosecution by depriving Palestinians collectively of aid.

While donations to Palestinians have been prevented, or even punished as “terrorism,” tax-deductible contributions to organizations bolstering the occupation are effectively subsidized by the state.

Israeli security services have accused El Halabi of funnelling seemingly impossible sums of money from World Vision to Hamas, amounting to more than twice the charity’s operating budget in Palestine for the previous 10 years.

Independent audits by World Vision International, the Australian and German governments, and the U.S. Agency for International Development all failed to find any evidence of financial impropriety on El Halabi’s part. When questioned about the improbable math behind the case, an Israeli government spokesperson responded that the exact numbers are “not really relevant.”

Also irrelevant in Israel’s eyes, apparently, are basic due process guarantees for the accused, who has been subjected to one of the longest security trials of a Palestinian in Israeli history — 165 hearings so far over more than five years. El Halabi was tortured and detained incommunicado without access to a lawyer for 50 days, his lawyer has been denied access to key pieces of the prosecution’s “evidence,” and defence witnesses from Gaza have been barred entry into Israel for testifying.

Undeterred by the paucity of the evidence, the judge presiding over the trial advised El Halabi that he should just plead guilty since there is “little chance” he will not be convicted — a Kafkaesque demand to which he has refused to acquiesce.

Following El Halabi’s indictment, Israel’s Foreign Ministry initiated a campaign to “spread the news among liberal and religious groups who support World Vision,” and discredit the humanitarian aid sector in Gaza as a whole. The fires of this witch-hunt have long been stoked by Israel advocacy organizations Shurat HaDin (the Israel Law Centre) and NGO Monitor — contributions to both of which continue to flow freely, lubricated by charitable tax status in Canada and the U.S.

Despite the pressure exerted by the El Halabi trial, other World Vision branches — specifically World Vision Germany — have continued to accept grants for Palestine, according to Messenger himself.

Indeed, the United Nations Office for the Coordination of Humanitarian Affairs’ Financial Tracking Service has recorded four significant grants to World Vision globally for its work in the Occupied Territories since the onset of the trial in 2016. Two of them — $500,000 from the Bill and Melinda Gates Foundation in 2019, and $588,928 from the European Commission’s Humanitarian Aid and Civil Protection Department in 2020 — are marked as new commitments.

In 2020, World Vision’s field office for the West Bank, Jerusalem and Gaza reported spending over $2 million to support West Bank schools, including $981,927 for COVID response: the precise need which the $165,000 raised by the CJPME Foundation and CPOC was intended to fulfill.

Just days after Messenger insisted there was a “freeze” on Palestine, World Vision Canada itself finalized arrangements with ultramarathoner Russell Lavis for a fundraiser to “support [them] in their work to protect in West Bank, Gaza, and Jerusalem,” which ultimately raised almost $10,000. This suggests that the supposedly general “freeze” may have been a more targeted chill against Palestine solidarity and advocacy organizations.

When asked about the apparent discrepancy, WVC responded that the restriction was not in fact a blanket one, as originally communicated, but only covered “large organizational grants in the region.”

“For two months, we met inexplicable delays, were falsely told that ‘administrative steps’ had to be conducted, and were seemingly falsely told that a ‘freeze’ on external grants for the [Occupied Palestinian Territories] was in place,” the CJPME Foundation and CPOC wrote in a complaint to Cooperation Canada, an umbrella group of international development and humanitarian organizations including World Vision Canada. “While no charity is obliged to accept all grants, WVC has failed to do so in a way which is clear, consistent and justifiable.”

The complaint outlined several apparent breaches of the Code of Ethics to which all Cooperation Canada members are required to adhere — including lack of transparency with donors, lack of accountability to on-the-ground partners in Palestine and failure to act with fairness.

WVC’s behaviour also possibly violated the four internationally recognized principles of humanitarianism: impartiality (non-discrimination on the basis of nationality, race and religion); neutrality (between opposing parties in a conflict); independence (from political, economic and military objectives); and humanity (to relieve human suffering wherever it is found).

Yet after discussing with WVC, Cooperation Canada informed the complainants that it “will not be pursuing this topic further,” dismissing it as a matter of “miscommunications” and “misunderstandings.”

In a prior meeting with the CJPME Foundation and CPOC, Cooperation Canada CEO Nicolas Moyer even proposed that by declining the donation from Palestinian and Palestine-solidarity organizations, WVC may have upheld rather than compromised its neutrality and impartiality.

Aid is used to “lubricate the prison-door hinges of settler occupation,” while efforts to dismantle the prison continue to be harshly suppressed.

WVC’s decision may have been “a way to demonstrate in fact neutrality and impartiality, by taking away the risk of being associated to other influencers,” Moyer said, according to a recording of the meeting. “Whether they passed judgement on CJPME, I don’t know…. But does that actually mean they didn’t live up to impartiality and neutrality principles? It may mean the reverse.”

Perversely, support for Palestinians’ basic rights under international law is cast as a sign of partiality rather than impartiality. “Neutrality” is deployed, yet again, as a shield for the status quo — one in which political solidarity with Palestinians is systemically repressed.

In Canada, as across North America and Europe, lawyers, academics, trade unions, teachers, students, journalists, artists and human rights organizations — including CJPME — have been smeared, physically attacked, threatened with professional disciplinary measures and censored for advocating for justice for Palestinians: the “Palestine exception” to free speech.

Last year, the University of Toronto’s Faculty of Law rescinded a job offer to international human rights scholar Valentina Azarova after a sitting judge complained about her research on Israel/Palestine; and in May, the Canadian Judicial Council refused to remove the judge involved for bias: the “Palestine exception” in justice.

As the WVC case illustrates, there is also a “Palestine exception” in aid, produced and perpetuated by multiple layers of oppression.

First is Israel’s occupation — which creates the need for aid to Palestinians in the first place. The occupation sucks billions of dollars from the Palestinian economy each year, as documented by the UN Conference on Trade and Development, rendering 50 percent of Palestinians dependent on aid. Meanwhile, Israel has abdicated its legal responsibility as an occupying power under the Geneva Conventions to protect the welfare of the occupied. For instance, during the pandemic, Israel has widely vaccinated its own population but refused to provide vaccines for Palestinians: a state of “medical apartheid” further intensified by Israeli forces’ destruction of hospitals and the only COVID testing lab in Gaza in May.

Second is the demonization and securitization of the humanitarian sector that steps in to fill the void — emblematized by Israel’s Potemkin trial of El Halabi for terrorism, and general targeting of humanitarian and human rights workers as “terrorists in suits.”

Third is the co-optation of international donors into propping up the occupation — whether by providing better paving for apartheid roads, or reinforcing Israel’s roadblocks to support for Palestinians. Ultimately, aid is not only a “lifeline” for Palestinians — which Israel boasts of generously permitting — but also a cash pipeline for Israel: 78 percent of international funding to Palestine ends up back in the Israeli economy, covering at least 18 percent of the costs of the occupation.

Fourth is the skewed regulation of charities in countries like Canada and the U.S. — so that while donations to Palestinians have been prevented, or even punished as “terrorism,” tax-deductible contributions to organizations bolstering the occupation (Shurat HaDin, NGO Monitor and others) are effectively subsidized by the state.

And fifth is the pervasive racism and dehumanization against Palestinians — which sustains and normalizes this pathological situation.

In the words of critical geographer and development scholar Omar Jabary Salamanca, aid is used to “lubricate the prison-door hinges of settler occupation,” while efforts to dismantle the prison continue to be harshly suppressed.

Disclosure: Azeezah Kanji is on the board of Canadians for Justice and Peace in the Middle East, but was not involved in the events described in this article.