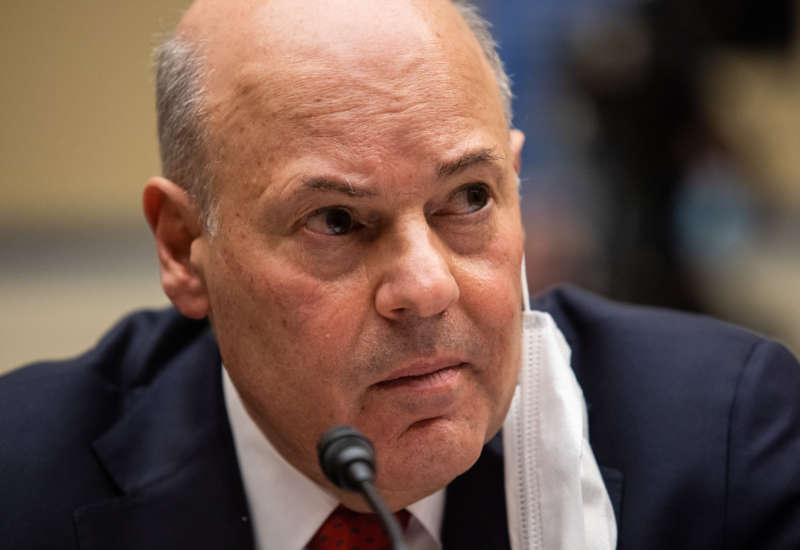 The removal of both U.S. Postmaster General Louis DeJoy and Ron Bloom, chair of the Postal Service Board of Governors, was demanded Friday night after it was reported that DeJoy had purchased hundreds of thousands of dollars worth of publicly-traded bonds from an investment firm for which Bloom is a managing partner — a transaction critics say is a gross breach of government ethics.

With Bloom and DeJoy — both appointed during former President Donald Trump’s tenure — already under fire from defenders of the U.S. Postal Service for a scheme to slow mail service and undermine the nation’s federal mailing system from within, the new reporting by the Washington Post revealed that DeJoy “purchased 11 bonds from Brookfield Asset Management each worth between $1,000 and $15,000, or $15,000 and $50,000” between October of 2020 and April of this year.

In total, the purchases totaled up to $305,000 during that period. In response to the reporting, Rep. Gerry Connolly (D-Va.) — who chairs the House Subcommittee on Government Operations, which has oversight of the Postal Service — ripped into both DeJoy and Bloom.

“This report is outrageous,” Connolly tweeted Friday night. “DeJoy and Bloom are bandits, and their conflicts of interest do nothing but harm the Postal Service and the American people.”

Both men, he added, “must be removed to restore the integrity of the USPS and #SaveThePostOffice.”

According to the Post’s Jacob Bogage and Douglas MacMillan:

Two ethics experts interviewed about the transaction disagreed over whether the bond purchases could cause conflict-of-interest issues in the agency’s top ranks. One argued that the transactions raise questions about oversight and governance at the nation’s mail service, which has taken on newfound prominence during the coronavirus pandemic and after the November election, in which nearly half of all voters cast their ballots through the mail. The other said financial connections between government officials could give off the appearance of conflicts without necessarily causing ethics problems.

Bloom, who as chair of the USPS board ostensibly serves as DeJoy’s boss, has expressed support for the controversial postmaster — a major GOP donor and Trump supporter — despite intense demands for his ouster ever since he moved to slow down mail delivery ahead of last year’s election when an increase of voting by mail was expected due to the Covid-19 pandemic.

“I’m stuck on DeJoy’s purchase of bonds from the company in which his quasi-boss is a managing partner,” Kathleen Clark, a law professor who studies government ethics at Washington University, told the Post, “because I wonder whether it affects Bloom’s ability to protect the public interest in his assessment of DeJoy’s performance as postmaster general.”

If you’re reading this, it means we’ve gone another day in which Louis DeJoy hasn’t been fired. USPS Board of Governors, what is the hold up?! Please, for the future and sake of the USPS, fire the man already!

While an email from Bloom sent to the Post argued that “no basis of conflict” was created by the bond purchases and a USPS spokesperson said that DeJoy did not directly order the purchases that were made on his behalf by his financial advisers, Clark said that does not absolve the clear ethical concerns.

On Friday evening, Bogage announced via social media that a slight addition had been made to his and MacMillan’s earlier story after learning of new information about ethics at the USPS under DeJoy.

This is 100% true. Postmaster General Louis DeJoy announced today that next week would be “Ethics Awareness Week” at USPS.https://t.co/ttSRn38UoF

“This is 100% true,” Bogage wrote. “Postmaster General Louis DeJoy announced today that next week would be ‘Ethics Awareness Week’ at USPS.”

What is the new Apple Music Voice plan, and who is it for?