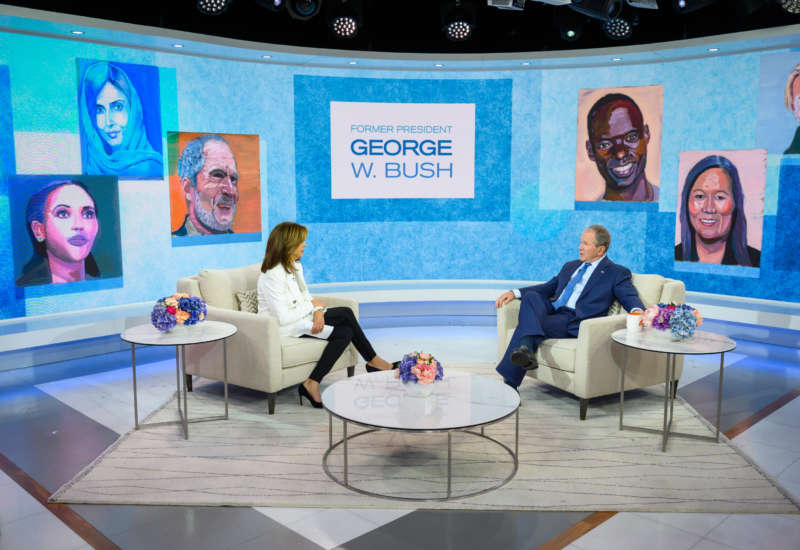 For a time back in the bad old days of Donald Trump, it seemed as if the corporate “news” media had ever so slightly corrected their hard-wired rightward tilt. They were still awful when viewed from a progressive vantage point, and Fox News was going to Fox News no matter what, but as the daily grind of the Trump presidency grew into a roaring existential threat to the country, that media often said what needed saying, providing context, background, fact checks and experts by the score to warn against “normalizing” fascism.

Maybe it was only a sense of self-preservation that wrought the change — the news media are, of course, “the enemy of the people” according to Trump, and would have been a certain target of his wrath had he ever been able to fully slip the leash. Having the angry mob turn its eyes to you, knowing that they know your name, has a mystic way of concentrating the mind.

That appears to be over now as the world encompasses the sudden change of power in Afghanistan, and it’s ugly as hell.

As always, Fox News is going to Fox News, but that network is outdoing even itself when it comes to dangerous and misleading coverage of the situation in Afghanistan. During his Monday broadcast, vile potato monster Tucker Carlson warned that the collapse of the Afghan government would release a death tide of refugees that would wash over the U.S. and straight up your driveway.

“If history is any guide, and it’s always a guide, we’ll see many refugees from Afghanistan resettle in our country in coming months,” Carlson intoned, “probably in your neighborhood. And over the next decade, that number may swell to the millions. So first we invade and then we’re invaded.” Laura Ingraham went on to push the theme: “Is it really our responsibility to welcome thousands of refugees from Afghanistan?”

“Probably in your neighborhood.” If you were wondering whether incoherently hateful immigration polemics were again going to be a GOP staple of the upcoming campaign season, look no further. Fox got the RNC talking points and lacquered them to the bathroom doors, probably.

Take a deeper dive into that, and what you see is a brazen example of a news network running as fast as it can from a mess of its own devising. Among a variety of things, the collapse of Afghanistan can be laid at the feet of two decades of presidents, politicians and military commanders deliberately bullshitting the public on the actual situation in that country. During that time, the main delivery vector for flag-humping hyper-nationalistic rubbish like that has been Fox News.

That streak remains unbroken. The daytime Fox broadcasts spent most of their time yesterday breathlessly blaming President Biden for the Taliban takeover of Afghanistan, gleefully bypassing an ocean of history and nuance that — if provided — might help the right-leaning public avoid getting led by the nose into another war that is almost old enough to buy a beer. By the evening, they were folding their nonsense coverage into racist GOP talking points. An opportunity squandered, try to contain your shock.

The other alphabet soup networks, along with a forest’s worth of newspapers, have fared little better in the delivery of useful information. Instead, we have been fed a steady diet of pundit-heavy drivel about “winners and losers,” with an unmistakable avoidance of anything which might remind viewers and readers that, more often than not, this sort of galloping tragedy is what happens when a war is lost.

I’m not here to stand in front of Joe Biden. He voted for this mess back in 2001, and while it is abundantly clear more should have been done to extricate our allies and personnel before the country fell, he faced a grim Hobson’s Choice: Get out the way we did, or begin pulling people out months ago and perhaps precipitate a running slaughter all the way to Kandahar and Kabul. Nothing is more vulnerable than an army in retreat, and that’s precisely what we were.

That being said, the president deserves at least some of his lumps, if for no other reason than because he’s where the buck stops. Yet this buck has stopped a few places before landing on Biden’s desk, but you’d never know it listening to the broadcasts or reading the boiling-oil editorials.

Former President Obama has barely merited a mention, despite having presided over and expanded this war, and despite having clearly failed to end it. Former President Trump signed a half-assed peace deal with the Taliban in February of 2020, which essentially handcuffed the Biden administration to some form of the current outcome.

The top-page motive behind Trump’s deal in Doha, according to BBC News: “The move would allow US President Donald Trump to show that he has brought troops home ahead of the US presidential election in November.” The GOP is so proud of all this, in fact, that they removed an RNC web page praising Trump for the deal.

And let us not forget the biggest soup bone in this particular stew, though the corporate “news” media devoutly wishes we would. You will be heartened to know that George W. Bush and his wife Laura have been “watching the tragic events unfolding in Afghanistan with deep sadness.” One would hope so. After all, here is the man who started the war, and then abandoned it for his Iraq misadventure without ending it, leaving office with the Afghanistan mission a rudderless mess that set the tone for the next dozen years to come.

Journalist Eric Boehlert has some thoughts:

The U.S. has spent trillions in Afghanistan stretching back 20 years, yet Biden, who has been in office for seven months and who campaigned on bringing the troops home, is being tagged as an architect for the Taliban’s inevitable rise to power there. A convenient, gaping hole in the coverage and commentary? The U.S. mission in Afghanistan was unalterably damaged when President George W. Bush hijacked that post-9/11 military mission and foolishly turned the Pentagon’s time, attention, and resources to a doomed invasion of Iraq….

Today the media’s role in marketing the Iraq War has been flushed down the memory hole, even though Iraq should be central to any discussion about the U.S.’s running failure in Afghanistan. “Remarkably, the word ‘Bush’ was not mentioned once on any of the Sunday shows” this weekend as they focused nonstop on Afghanistan, noted Jon Allsop, at the Columbia Journalism Review. You cannot discuss the rise of the Taliban in 2021 without talking about the U.S.’s doomed Iraq War in 2003. But the press today wants to try.

These things are not discussed by the corporate “news.” Bad for business, you see.

However, if you are looking for a bit of context, here is some to consider: After the Soviet Union withdrew in defeat from Afghanistan in 1989, the U.S.S.R. collapsed and ceased to exist only two years later. The Soviet Union’s war was ten years shorter than ours, and it was not contending with viral variants of COVID-19 when it left.

I doubt the corporate “news” media will talk about that, either, but it’s the truth.