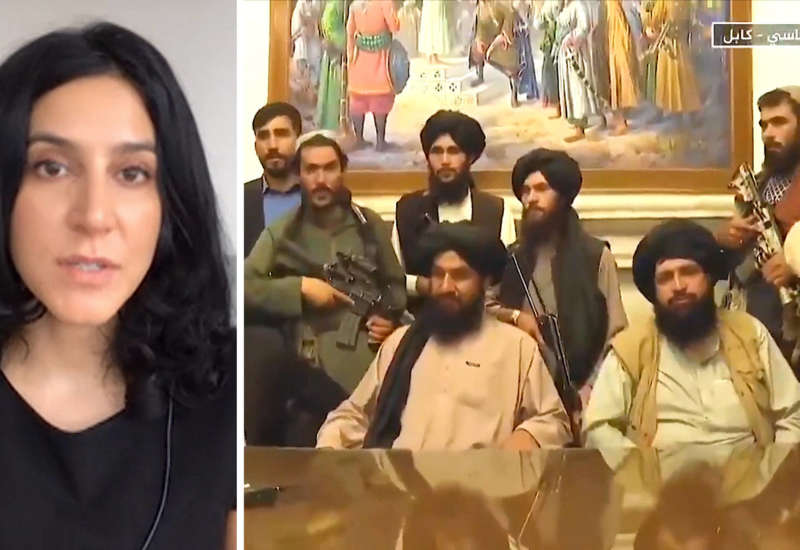 Investigative journalist Azmat Khan, who has reported extensively in Afghanistan, says President Joe Biden has not yet addressed the chaos unleashed by the collapse of the Afghan government. In remarks on Monday, Biden “really focused on the decision to end the war” and ignored criticism about chaos at the Kabul airport and the abandonment of thousands of Afghans who helped the U.S. over the last 20 years. “None of that was really discussed in any detail,” Khan says. She also discusses why the Afghan military fell so quickly to the Taliban, its overreliance on U.S. air power, how civilian casualties weakened support for the U.S.-backed government, and the massive profits the two-decade-long war generated for U.S. defense contractors.

AMY GOODMAN: Let’s bring in Azmat Khan, the investigative reporter, who’s covered Afghanistan for years. Your response to President Biden, to the complete chaos at the airport, the thousands of Afghans who are trying to leave, and the Taliban victory in Afghanistan, overall?

AZMAT KHAN: So, President Biden really focused on the decision to end the war, and not on that searing criticism of this withdrawal, the chaos we’re seeing at the airport, the leaving behind of many people to whom the United States had made promises, people like translators, people like local journalists who were working with American journalists, as well as activists, who now face not just great uncertainty, like was earlier being talked about, but significant threats to their lives and safety. So, none of that was really discussed in any detail.

But I think another omission that really needs to be highlighted is the fact that President Biden took this negative view of Afghan security forces for, quote, “not fighting,” and that’s not accurate. You know, as the earlier speaker was describing, many Afghan soldiers have died fighting the Taliban over the last 20 years, countless, whereas American soldiers, since Operation Freedom’s Sentinel began in 2015, you know, we’ve lost 64 American soldiers in hostile deaths in Afghanistan. So there is a real disparity about who was paying that human costs of that fight, at least from the side that’s fighting the Taliban.

But at the same time, what he didn’t acknowledge was the fact that the entire way that those soldiers were doing that fight was with the support of U.S. air power. So, the United States was bombing heavily parts of that country where there were fights against the Taliban raging. So, just to give some context, in 2019, the United States dropped more bombs in Afghanistan than in any previous year of the war. So, I think it was something close to — more than 6,200 bombs that year, as they were trying to negotiate. So, even with incredible bombs dropping, you know, this was the deal they were able to get. And even then, look at how many Afghan soldiers were dying. Now, once you take that level of air power out of the mix, who would expect any Afghan soldiers to continue to fight? If that many Afghan soldiers died with the support of air power, what happens when you take that out of the mix?

Now, on top of that, I just need to say that that air power may have helped keep this tenuous hold that the Afghan government had on the country, but it also killed scores of civilians in rural areas, areas that don’t often get talked about. Nearly three-quarters of Afghanistan is rural countryside. The majority of the population comes from these kinds of areas, populations that have seen the brunt of the war and we rarely hear about. And they’ve suffered not just bombings, airstrikes and night raids, but also Taliban attacks. And many of them wanted this war to end. And you can’t really talk about that air power and the tenuous grip that the government had without also acknowledging the ways in which that has created space for the Taliban, where even civilians who didn’t like the Taliban just wanted the war to end.

So it kind of makes sense, once you take air power out of the mix, that sort of tenuous hold falls, but at the same time, at this point, the Taliban has resuscitated itself and grown. You know, many of its more recent recruits were people who did lose loved ones and really wanted revenge for those casualties. So, in many ways, as surprising the swiftness of it was, it also makes sense, what we see happening right now.

AMY GOODMAN: The Intercept reports that military stocks outperformed the stock market overall by 58% during the Afghanistan War, including Boeing, Raytheon, Lockheed Martin, Northrop Grumman and General Dynamics. Quote, “[F]rom the perspective of some of the most powerful people in the U.S., [the Afghanistan War] may have been an extraordinary success. Notably, the boards of directors of all five [military] contractors include retired top-level military officers.” You have written extensively, Azmat, about these contracts and who financially profited from this war.

AZMAT KHAN: It’s really stunning. It’s incredibly stunning, because people don’t often talk about the massive wealth, the people who maybe went to Afghanistan temporarily, got hazard pay and built themselves homes, wealthy businessmen, military — former military officials — who now, by the way, come on television talk shows to give their views, without concealing necessarily their own — the fact that they’re on boards of many of these defense contractors. So, there has been incredible corruption on the part of many Americans, on the part of many contractors, as well as just on the ground, that has really helped to isolate local people from the Afghan government.

And so, just to give you some examples, you know, I spent a lot of time investigating U.S.-funded schools in Afghanistan, something that we might consider the kind of untouchable success of the war — right? — that in these 20 years, the United States has radically transformed education for Afghan children, and, in particular, girls. And I really dug into the schools the United States had funded, and picked 50 of them in seven battlefield provinces and went to go see, well, you know, what’s happening at these schools now. And when I would dig into it, I think 10% of the schools either were never built or no longer exist. A vast majority of them were falling apart.

And then, when I would try to understand what happened — you know, for example, in one case, there was a school that was missing. Turns out it was built in the village of a notorious Afghan police chief who was allied with the United States, Abdul Raziq, known for many human rights abuses. And the local education chief said, “Yes, we built it here, and there were no children in this village for three years, so nobody really attended. The school never opened for a number of years.”

In another instance, the school I arrived at was empty, incomplete, never finished, and all the kids were across the street at a mosque having a religious education, not the curriculum that they were on the books as recording having had. And when I tried to figure out what happened, it turned out the contract for the school went to the brother of the district governor, who then, you know, pilfered the money, and it was never finished as a result of that.

Down the block in another part of Kandahar, the contract for a school was given to a notorious local warlord, who’s — actually, for the clinic that was going to be built next to the school — was given to this notorious warlord, who basically wound up being the source for the rise of the Taliban in many ways. His family was part of that sort of corruption in the early years that preceded the Taliban, that really riled up individuals to support the Taliban because of the massive corruption and the human rights abuses that were happening to Afghan people.

So, even something as noble and as worthy of effort as education has been mired in this kind of corruption, this kind of wheeling and dealing. And if we had to understand why, I think it’s the fact that counterterrorism goals were baked into every single aspect of the American project in Afghanistan. So, even something great like schools, you know, had these metrics, had this desire to imbue a counterterrorism narrative of some kind, that left them willing to work with people who were abusive actors in the name of fighting terrorism, when in reality they often undercut Afghan people and a lot of the promises of the United States at on almost every level.

AMY GOODMAN: Azmat Khan, I want to thank you for being with us and give Lieutenant [sic] Colonel Ann Wright the final word. As you speak to us now from Honolulu,, from Hawaii, and you look at what’s happening in Afghanistan, where you were almost two decades ago, what you think needs to happen, and what you think Americans should understand about the U.S. War in Afghanistan?

ANN WRIGHT: Well, I think that the U.S. public ought to be very wary of every administration that thinks that we should take a military option in trying to resolve any sort of conflict. We have seen that the United States in Vietnam, in Iraq, in Afghanistan — the lies that are told to us about why we need to go into countries with our military versus having some nonmilitary resolution to these issues is really, really important, and particularly as we face our government right now that’s saying that China and Russia are enemies that are threats to our national security. We, the U.S. people, have to push back against our government, against any more military invasions, occupations, attacks on any country.

And my heart goes out, it bleeds for the people of Afghanistan, who have suffered through these decades long of war, of violence. And I certainly hope that the next years somehow calm down and that the Taliban takes a very different tact than what it had when it was in power from 1996 to 2001, because the people of Afghanistan deserve much better than what they have had. Thank you.

AMY GOODMAN: Well, I want to thank you both for being with us, and of course we’ll continue to cover this. I demoted you, Ann. Ann Wright is a retired U.S. Army colonel and former U.S. State Department official who was part of the team that reopened the U.S. Embassy in Kabul, Afghanistan, in December 2001. And Azmat Khan, investigative reporter, contributing writer at The New York Times Magazine, we’ll link to your articles, including the one you described, “Ghost Students, Ghost Teachers, Ghost Schools.”

When we come back, we go to Haiti, where the tropical storm has slammed the same parts of the country shattered by the earthquake on Saturday that’s killed more than 1,400 people. Stay with us.

The Lessons of the Kansas Primary Go Far Beyond Abortion Rights