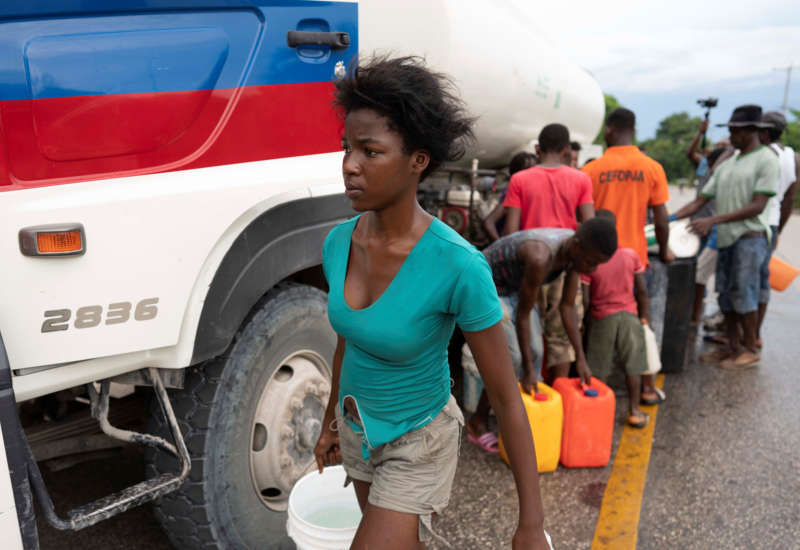 Pleas for international aid poured out of Haiti on Monday in the wake of a weekend earthquake that killed at least 1,419 people amid growing concerns that Tropical Depression Grace will hamper search and rescue efforts as well as the delivery of humanitarian assistance.

“We’re pleading for help,” Marie-Helen L’Esperance, mayor of the town of Pestel, told Haiti’s Pacific Radio. “Every house was destroyed, there’s nowhere to live, we need shelters, medical help, and especially water. We’ve had nothing for three days and injured victims are starting to die.”

Marcelin Lorejoie, a volunteer, told CNN on Sunday that “we really need help, yesterday I was helping at the hospital and things were out of control.”

“Not enough doctors, not enough medicines, and we have people with serious injuries,” Lorejoie said. “We need urgent help before things [get] more complicated.”

“I’m the only surgeon over there.” With just a few dozen doctors available in a region of Haiti that is home to one million people, the aftermath of the earthquake has turned increasingly dire. https://t.co/7Jewm78DoM

Grace, which could dump up to 15 inches of rain on some areas, made landfall in Haiti Monday afternoon, while the Caribbean country was still reeling from the earthquake that struck as Haitians face political turmoil following the July assassination of President Jovenel Moïse.

“That heavy rainfall can really lead to life-threatening flooding and mudslides and potentially urban flooding as well,” Michael Brennan, branch chief of the Hurricane Specialist Unit at the U.S. National Hurricane Center in Miami, told The New York Times Monday.

In a 2:00 pm ET update, the center warned of “heavy rains from Grace spreading westward across southern Haiti” and the “risk of flash flooding and mudslides” in Hispaniola, the island that Haiti shares with the Dominican Republic, through Tuesday.

Over the past dozen years, Haiti has been repeatedly devastated by earthquakes. On Saturday, according to the Washington Post, “schools, medical centers, churches, bridges, and more than 84,000 homes collapsed or were damaged in the temblor, which struck a region already battered by Hurricane Matthew in 2016.”

The weekend event, the Times noted, “occurred on the same system of faults as the one that devastated the capital, Port-au-Prince, in January 2010. And the previous quake almost certainly made this one more likely to occur.”

Haiti, the poorest country in the Western Hemisphere, was still recovering from the 2010 devastation when the earthquake struck on Saturday.

Ahead of the storm Monday, The Associated Press reported on the conditions of a coastal community in a country that was “already was struggling with the coronavirus pandemic, gang violence, worsening poverty, and the political uncertainty” after last month’s assassination:

“After two days, they are almost always generally infected,” said Dr. Paurus Michelete, who had treated 250 patients and was one of only three doctors on call when the quake hit. “That makes it hard on us.”

The magnitude 7.2 earthquake left at least 5,700 people injured, with thousands more displaced from destroyed or damaged homes. Les Cayes was darkened by intermittent blackouts, and many people slept outside, clutching transistor radios tuned to news, terrified of the continuing aftershocks.

The United Nations Office for the Coordination of Humanitarian Affairs (OCHA) said Monday that “U.N. agencies and partners are mobilizing resources and personnel” to support the Haitian government, and noted that Emergency Relief Coordinator Martin Griffiths allocated $8 million from the U.N. Central Emergency Response Fund to support the humanitarian response.

“The health system in affected areas is being overwhelmed, as health workers are assisting the injured while also contending with the Covid-19 pandemic,” OCHA said. “The number of Covid-19 patients is expected to increase in the coming days and weeks.”

Progressive U.S. lawmakers have emphasized the necessity of global aid for Haitians, with Sen. Jeff Merkley (D-Ore.) declaring that “the international community must come together with urgency to help with recovery.”

Thinking of all those who lost loved ones or are still searching for family after this devastating disaster.

We must do everything we can to help Haiti during the recovery efforts — and in the difficult days, weeks, and months ahead.https://t.co/t397J6TkHF

Some lawmakers, like Sen. Elizabeth Warren (D-Mass.) emphasized the importance of U.S. assistance. She said that “we must do everything we can to help the recovery efforts.”

Since Saturday, the United States Agency for International Development (USAID) has deployed a disaster assistance response team as well as an urban search and rescue team to Haiti, with transportation assistance provided by the U.S. Coast Guard and Department of Defense.

My heart is with the Haitian people and their friends and family here in Michigan.

We must do everything we can to help—send aid and rescue teams, welcome refugees, donate vaccines, and be there for the Haitian people however else we can. #Haiti https://t.co/vi7r0dmeEh

Rep. Cori Bush (D-Mo.) agreed with Warren and others, tweeting Monday afternoon that she remains “committed to doing all we can to support Haiti’s full economic and political recovery.”

Highlighting the lessons from past disasters, K. Jessica Hsu and Mark Schuller wrote Monday for Common Dreams that “while Haitian people may lack financial resources, the response to the earthquakes must be a #HaitianSolution; solidarity not charity, built on justice, rights, relationships, and Haitian leadership.”

How Prosecutors Use Conspiracy and Questionable Testimony in “Gang” Cases