The NLRB Says Amazon Cheated in the Bessemer Union Election. What Happens Next? 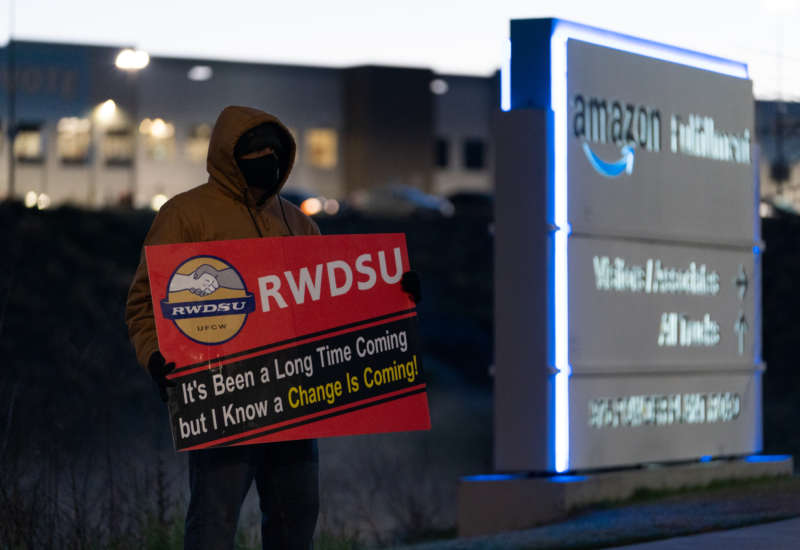 Recently, the National Labor Relations Board (NLRB) dropped a bombshell about one of the most-watched union organizing campaigns in decades. Board Hearing Officer Kerstin Meyers stated that in defeating the Retail Wholesale and Department Store Union (RWDSU) in the February-March 2021 mail-in ballot election at an Amazon warehouse in Bessemer, Alabama, the retail giant cheated and should now face a rerun election.

While Meyers’s recommendation attracted widespread media attention, none of the coverage fully explained the significance of the recommendation or outlined the likely next steps in the somewhat complicated NLRB process. I attended both the pre- and post-election NLRB hearings at Amazon over Zoom. Here are some thoughts on what could and should come next in this historic union election fight.

Why Did the Hearing Officer Recommend a Rerun Election?

In union certification elections, the NLRB seeks to ascertain the desires of bargaining unit employees regarding union representation under “laboratory conditions as nearly ideal as possible.” However, when the standard of electioneering falls too low — such as happened at Amazon in Bessemer — the Board sets aside the results and orders a rerun election.

Employer misconduct is the overwhelming reason the NLRB orders most rerun elections. Most of the time in such cases, including at the Bessemer election, the employer commits more than one unlawful practice.

Amazon management committed two main offenses at Bessemer: First, they pressured senior management at the United States Postal Service to install a mailbox on the premises for employees to cast ballots, despite being told twice by the Board that they could not have an on-site election. They then covered the mailbox with a marquee plastered with slogans connected to the “vote no” campaign, repeatedly told employees to use the mailbox to vote and had multiple external surveillance cameras in the general vicinity of the mailbox. Second, Amazon unlawfully polled employee union sentiment during the election campaign by distributing “vote no” swag to employees in the presence of Amazon local managers and human resource personnel.

Employer misconduct is the overwhelming reason the NLRB orders most rerun elections.

This process is expected to take several weeks, but we could get a decision relatively quickly. The regional director’s decision will include a timeframe for a rerun election, if that is what the decision calls for. The NLRB does not collect data on how often the regional director issues a decision which overturns the hearing officer’s recommendation. However, in this particular case, it seems unlikely that will happen because the hearing officer is an experienced NLRB agent with a stellar reputation who has not omitted any important issues.

After the acting regional director issues her decision, either party can request that the decision be reviewed by the full NLRB in Washington, D.C. The Board may grant review or not. (The Board must grant the request, but this is not a right of review, just a right to request.)

This stage will likely take several months — the Obama NLRB tried to speed up the process, and the Biden NLRB will likely do the same — but once it happens, the Board’s decision is final: The NLRB’s ruling on the request for review cannot be appealed to federal courts in a union representation case such as this. That’s because the union’s case was limited to objections to the conduct of the Bessemer election (i.e., it was not a “consolidated unfair labor practices case,” as the union filed separately with the NLRB over two allegations of unlawful termination of Bessemer union activists); thus, the recommendation for a rerun election is issued by an NLRB hearing officer and not an administrative law judge.

President Joe Biden nominated two new Democrats to the NLRB last month, both former union lawyers, and they have now been confirmed by the Senate. These appointments will give the Board a 3-2 Democratic majority by the end of August — a full Board typically has three members nominated by the president’s party, two from the opposition party — and Amazon would likely lose before the full NLRB.

In contrast, the chair of the Trump NLRB, management attorney John Ring, had worked for almost 30 years for Morgan Lewis, Amazon’s longtime corporate law firm that has specialized in fighting unions for decades. Indeed, in proceedings before the Board, Morgan Lewis attorney and former Board member Harry Johnson has acted as Amazon’s lead attorney.

Despite the company’s dim prospects before the Board, Amazon could still have some legal recourse. If the NLRB Atlanta area regional director’s decision upholds the recommendation for a rerun election, the Board does not grant review and the union wins the rerun election, Amazon could challenge the election results with a so-called “technical 8(a)(5).” This maneuver effectively allows an employer to challenge a union election win by refusing to recognize and bargain with the union, in which case the union would have to file an unfair labor practice charge alleging that the employer violated the duty to bargain under 8(a)(5). The NLRB regional director would then issue a complaint and file a motion for summary judgment with the Board, which would decide the case on an expedited basis.

Violating the law and risking a rerun election, rather than risk losing an initial election and face unionization, has been a common anti-union tactic for several years.

In such cases, however, the company can appeal the Board’s decision to federal courts. This would not only drag out the legal case for months, if not years, it would also make it significantly more difficult for the union to sustain a viable organizing campaign. Employers pursue this tactic because they generally fare better before federal courts than they do at the NLRB when Democrats constitute a majority on the Board. (There is no comparable process which allows a union to force representation case issues before a court.)

Still, this process depends on the RWDSU being able to win a rerun election in the first place.

Could the RWDSU Win a Rerun Election?

After the votes had been counted, RWDSU organizers reported that Bessemer did not have the atmosphere of a losing union campaign. Many Bessemer workers who had voted against the union near the start of the seven-week voting period told organizers toward the end that they would change their votes if they could vote over.

The NLRB does not currently track data on the outcome of rerun elections. However, in general, unions often fare poorly in rerun certification elections ordered by the NLRB when unlawful employer electioneering has tainted the first vote, especially in elections involving large bargaining units — such as the 5,875-worker unit at Bessemer — and those in which the employer won by a large margin of victory in the first election. Amazon won the first Bessemer vote by a more than 2-1 majority (though the company had challenged hundreds of ballots, which would have likely made the vote closer). In such cases, the result is frequently similar to that in the first election.

Quite simply, a rerun election often proves an ineffective remedy, and the unlawful anti-union campaign during the first election continues to poison the atmosphere during the second election. Unions are unable to overcome the climate of fear, anxiety and distrust that was created by the employers’ aggressive and unlawful anti-union electioneering in the first campaign. Thus, violating the law and risking a rerun election, rather than risk losing an initial election and face unionization, has been a common anti-union tactic for several years — one that anti-union consultants actually advise employers about.

For example, Fred Long of the now-defunct West Coast Industrial Relations Associates was taped advising employers at a “how to stay union free” seminar:

You got to remember you lose only once. What happens if you violate the law? The probability is that you will never get caught. If you do get caught, the worst that can happen is you get a second election and the employer wins 96 percent of those. So the odds are with you.

Even so, most companies are loath to face rerun elections, and Amazon would not enjoy the intense media scrutiny that would inevitably accompany a second election at Bessemer.

What Should the NLRB Do About Amazon’s Law-Breaking?

Amazon got caught violating the law at Bessemer in large part because of the media’s intense scrutiny and outstanding coverage of its blistering anti-union campaign. But if rerun elections are frequently not effective remedies for unfair and unlawful employer electioneering practices, what other remedies could the Board adopt?

The Board’s general counsel should, at a minimum, target Amazon for its persistent unlawful behavior in union organizing campaigns.

Under current law, the Board does not have the authority to adopt the kinds of measures that would change the dynamics in union campaigns in a meaningful way, and cannot deny Amazon access to its formidable anti-union tools.

For example, the Board cannot prohibit mandatory captive audience meetings or impose meaning financial penalties for legal violations, both of which are provisions in the omnibus labor law reform legislation currently being considered by the U.S. Senate, the Protecting the Right to Organize (PRO) Act. Moreover, unlawful anti-union actions designed to crush organizing activity are now arguably a pattern of behavior at Amazon: Earlier this month, the Board found Amazon had committed unlawful anti-union actions at its warehouse in Staten Island, New York.

The Board’s general counsel should, at a minimum, target Amazon for its persistent unlawful behavior in union organizing campaigns, as it did with Walmart in 2014.

Amazon workers at Bessemer will still face a tough uphill struggle to exercise their right to choose a union. At present, the NLRB certification process is effectively a marathon and a minefield in the path of workers who try to organize powerful anti-union corporations. Amazon, in particular, presents an existential threat to any prospect of creating more democratic workplaces in the U.S. and even globally.

The Biden administration urgently needs to target more aggressively egregious labor rights violators such as Amazon. The president and the labor movement should use Amazon as the poster child for why stronger labor rights, through the PRO Act, is an idea whose time has come.