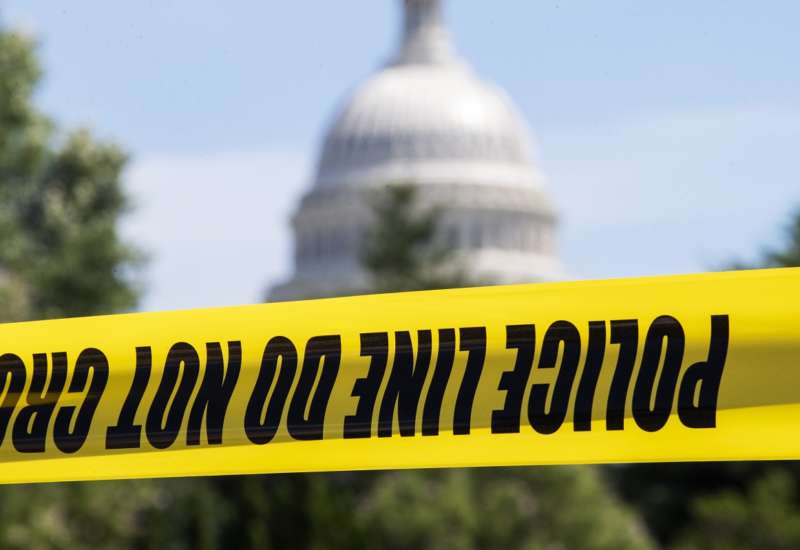 A man who threatened to detonate an explosive device inside his truck near the United States Capitol building complex on Thursday has surrendered to authorities, after several hours of negotiation with Capitol Police and allegedly sharing his thoughts in a Facebook livestream.

The incident began around 9:15 a.m. Eastern Time, and was not resolved until around 2:30 p.m. At that point, the man removed himself from the vehicle and gave himself up to police, after a tense standoff in which he threatened to detonate his device.

Officials who were involved in the incident have identified the man as Floyd Ray Roseberry of North Carolina. Several of his social media posts show him promoting former President Donald Trump while lambasting Democrats.

Livestreaming video that Roseberry purportedly posted online while parked in his truck on Thursday included a varied number of far right commentaries, most notably pro-Trump sentiment and anti-Democratic Party viewpoints. Many of his video screeds were directed toward Speaker of the House Nancy Pelosi (D-California) and President Joe Biden, with Roseberry referring to the two several times by their first names only.

According to Talking Points Memo, which detailed Roseberry’s videos in a live blog during the event, his commentary was a “smorgasbord of Trump-world complaints.” Roseberry at times appeared resolute in his actions, ready to die for whatever reasons he had shown up to the Capitol. At other times, however, he was tearful, expressing a desire to go back home to his family.

“Shoot me — get the revolution started, Joe,” Roseberry said.

“The revolution is here, people,” he said at another point.

“I’m ready to die for the cause,” Roseberry also said. He added, “The choice is yours,” directing his comments toward Biden, adding that if he was shot, he would end up “blowing up two and a half city blocks” in the area.

Roseberry described Biden as a “dickhead” who, he predicted, would be removed from office and jailed, with Trump being reinstated in his place. His statements are aligned with a conspiracy theory in far right circles that falsely claimed Trump would be made president again on August 13. Roseberry also said he was planning for some sort of action to happen on Labor Day, and called on “Nancy” and “Joe” to leave office “unless you like to hear people scream.”

At other moments, Trump’s reinstatement appeared to not be as important to Roseberry as Democrats leaving their seats of office (which they justly won in last year’s elections).

“I don’t care if Donald Trump ever becomes president again, it doesn’t matter to me. I think y’all Democrats need to step down — people don’t want you there,” Roseberry claimed.

Roseberry also expressed anti-mask views, and claimed he couldn’t get treatment for a broken arm because he wouldn’t cover his face while being treated.

Roseberry’s sentiments on social media, both during and before the event on Thursday, expressed pro-Trump and anti-Democratic viewpoints.

“The emerging picture of the person at the Capitol threatening to blow up a couple of city blocks is of someone who believes the election was stolen, and that Democrats are unpatriotic traitors,” said Don Moynihan, a political science professor at Georgetown University.

The emerging picture of the person at the Capitol threatening to blow up a couple of city blocks is of someone who believes the election was stolen, and that Democrats are unpatriotic traitors. That is to say, someone who believes standard Fox News/GOP/Trump rhetoric. pic.twitter.com/hxMz6jE6sE

“Those who say they deplore violence while fueling the Big Lie, or turning a blind eye toward QAnon conspiracy theories, or framing their political opponents as enemies are in fact fueling the conditions of domestic terrorism,” Moynihan added, referring to conservative Republican lawmakers who have entertained Trump’s and others’ false and baseless assertions of the 2020 election being stolen from the former president.

Earlier this month, far right conspiracy theorists’ claims about Trump being reinstated in August (and the incredibly low likelihood of that actually happening) were cited as possible motivations for right-wing violence in the next few weeks, according to a Department of Homeland Security bulletin released two weeks ago.

“Some conspiracy theories associated with reinstating former President Trump have included calls for violence if desired outcomes are not realized,” that advisory stated.