Sanders Traveling to GOP Districts to Pitch $3.5T Plan Ahead of 2022 Elections 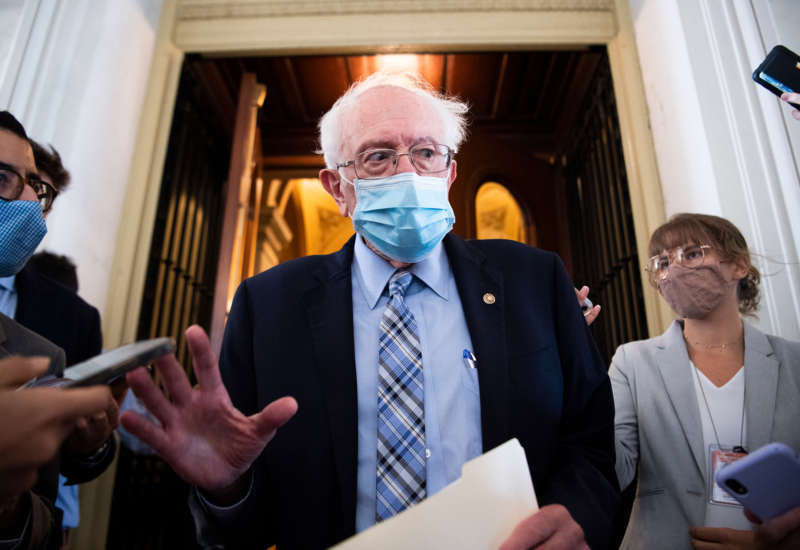 With both the Democrats’ policy priorities and the upcoming 2022 elections in mind, Sen. Bernie Sanders will travel next week to Republican districts in Indiana and Iowa to speak with voters about the $3.5 trillion spending plan that he’s hailed as the boldest federal budget proposal since the New Deal.

The Vermont Independent will talk with constituents about how the spending plan, on which he led negotiations as the Senate Budget Committee chairman and which he and Democrats unveiled earlier this month, will improve the lives of working people across the country while demanding that wealthy households and corporations pay their fair share.

The National Republican Senatorial Committee claimed Sanders’ leadership on the spending plan is proof of a “Socialist takeover of the Democrat Party.” The senator said Thursday that he believes voters across the political spectrum in Indiana and Iowa will find themselves agreeing with the Democrats’ plan for federal spending.

“Within the next several months Congress will be voting on the most consequential piece of legislation for working people, the elderly, the children, the sick, and the poor since Franklin Delano Roosevelt and the New Deal of the 1930s,” Sanders said in a statement. “While it will have no Republican support in Washington, Democrats, Independents, and working-class Republicans all over the country support our plan to finally invest in the long-neglected needs of working families. I very much look forward to hearing from some of them.”

I hope you’ll join me as I host town halls in Indiana and in Iowa to speak directly with working class voters about the need of our government to invest in the people.

Cedar Rapids lies in Iowa’s 1st Congressional District, which was represented from 2018 until 2020 by moderate Democrat Abby Finkenauer, who lost her seat last year to Republican Ashley Hinson.

Former President Donald Trump also increased his vote total in both districts between 2016 and 2020.

The framework for the spending plan includes an expansion of Medicare to cover dental, vision, and hearing care; funding for a Civilian Climate Corps; an expansion of this year’s increased Child Tax Credit; subsidies to ensure no family pays more than 7% of their income for child care; paid family and medical leave; universal pre-K for three- and four-year-olds; and tuition-free community college.

Recent polls by Quinnipiac University and the progressive think tank Data for Progress (pdf) have found that large majorities of Americans — between 62% and 66% — support the spending plan.

The party will need all Democrats in the Senate to support the budget proposal in order to pass the spending plan through the filibuster-proof reconciliation process.