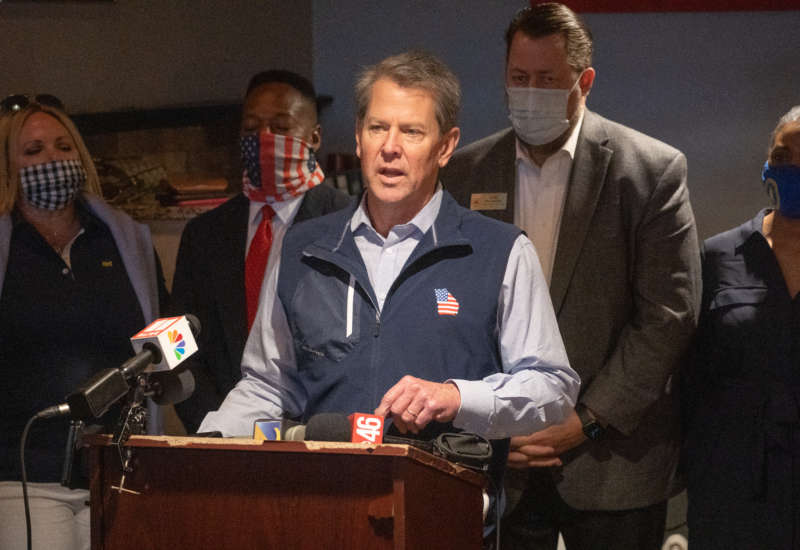 Then in July, Kemp established such a committee for himself to help finance his campaign for the upcoming 2022 gubernatorial race. The Atlanta Journal-Constitution first reported the creation of the committee.

Senate Bill 221 allows candidates running for governor, lieutenant governor and party leadership positions in the state House and Senate to create “leadership committees” that have no caps on individual contributions. The bill passed through the Georgia legislature along party lines, with near unanimous support from Republicans and no Democrats voting in favor.

As of the 2018 election cycle, 11 states allowed unlimited contributions from individuals to the campaign committees of candidates for state offices, according to the Campaign Finance Institute, which is part of OpenSecrets.

Leadership committees can coordinate directly with the campaign and can also spend money on other races throughout the state. The committees can legally receive donations during Georgia’s legislative session, a practice that has been banned in the state since the 1990s.

A candidate’s campaign committee, though, still has a contribution cap. Candidates running for statewide office are limited to $14,000 in individual contributions between their primary and general election races, with smaller amounts allowed for runoff elections.

Kemp created the Georgians First Leadership Committee on July 7, according to registration records provided to OpenSecrets by the Georgia Government Transparency and Campaign Finance Commission. An open records officer at the commission said Kemp is the only candidate that has registered a leadership committee.

Critics of the law say it unfairly helps incumbent candidates. Aunna Dennis, executive director of Common Cause Georgia, said it allows incumbents to get a headstart on fundraising because a non-incumbent candidate first has to clear a party primary before they can create a leadership committee.

“It definitely protects incumbents … they are not held to the same standards as someone who is not elected to that office,” Dennis told OpenSecrets. “It’s like a horse race, but you’re allowing some horses to get out the gate before the other horses are even able to contend in the race.”

That means Kemp can begin raising funds immediately, while whichever Democrat runs against him in 2022 will not be able to tap into these uncapped contributions until after the party’s primary in 2022.

Former Georgia Democratic gubernatorial nominee Stacey Abrams, who rose to political stardom in her close race against Kemp in 2018, is rumored to be considering a second run. If Abrams does declare and then win the Democratic primary in May 2022, she would only have six months to raise and spend funds through a leadership committee compared to Kemp’s year and a half.

Abrams’ national profile soared after the 2018 gubernatorial race when she launched Fair Fight, a voting rights organization, and she made it to President Joe Biden’s list of potential vice presidential nominees.

The fame has made her a formidable player in the political fundraising world. Fair Fight PAC, which is based in Georgia, raised nearly $90 million from donors across the nation during the 2020 election cycle.

Georgia is no stranger to expensive campaigns. The Atlanta Journal-Constitution estimated that the 2018 governor’s race cost more than $100 million. The state’s dual U.S. Senate races, which helped Democrats clinch a slim majority in the chamber, were the most expensive in Senate history.

Kemp’s leadership committee will not report its first fundraising numbers until January, but he has already raised $11.8 million this election cycle through his main campaign committee.

Republican state Sen. Jeff Mullis, who sponsored the legislation, argued the law will increase transparency of campaign funding. The leadership committees must report contributions and expenditures to the state ethics commission, which oversees campaign finance reporting, he noted in a speech on the state Senate floor.

However, “dark money” organizations which do not need to disclose their donors, can give unlimited sums to the new committees, effectively obscuring the original source of the money.

State Sen. Jen Jordan, a Democrat running to be Georgia’s attorney general in 2022, has been vocal in her opposition to the law, calling it the “Rules Don’t Apply to Us Act.”

“I think that Georgia law, in terms of [campaign finance reporting], is pretty weak as it is,” Jordan said on the state Senate floor before the bill went to a vote. “But this takes the cake, this takes it over the line with respect to any kind of transparency.”