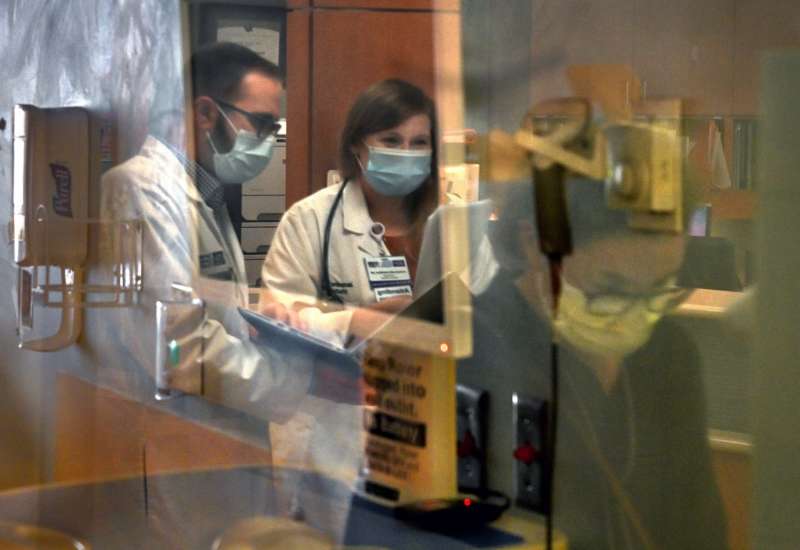 Dozens of doctors in Palm Beach County, Florida, gathered on Monday to stage a simulated walkout to draw attention to their hospitals being filled with patients who were not vaccinated against coronavirus.

Around 75 doctors in total took part in the protest, calling on residents in the state to “ignore the nonsense and the absurdities that you’re hearing people say at public meetings,” and to “recognize the value of what a vaccine will do,” reported NBC News correspondent Kerry Sanders.

“It’s incredibly frustrating because we know vaccines are safe and effective,” said JT Snarski, one of the physicians participating in the walkout. “And it’s people who go out and talk against them that really go against physicians and medicine and science.

Despite errant posts from conservative media personalities on social media, those who took part in the walkout were not technically walking away from their positions or staging a real “strike” from working. Rather, the walkout sought to give attention to the crisis those working in hospitals in Southern Florida are seeing daily. Many of the doctors who took part had just ended their shifts moments before attending.

“Our patience and resources are running low, and we need your help,” said internist Rupesh Dharia.

There’s a simple solution, the doctors said, but one that too few in the state are taking advantage of doing: getting vaccinated to prevent the need for medical help in the first place.

“It is so frustrating. Many of these patients have decided not to get vaccinated, but when they’re hospitalized, they tell us they wish they had,” Jennifer Buczyner, a neurologist, said.

Statistical evidence backs up these anecdotal statements from Florida doctors. Although data is not available in Florida itself, among dozens of other states where the numbers are made public, breakthrough cases remain a very small percentage of total coronavirus-related hospitalizations.

Only 51 percent of Florida is fully vaccinated at this time. More than 23,300 new cases of COVID-19 are being identified each day, on average, and 212 individuals are dying daily.

Those numbers put Florida in some very undesirable rankings — the state has the second highest case rate in the nation, and it ranks third for its rate of COVID-related deaths being reported at this moment in the pandemic.

Some experts are hopeful that the recent Food and Drug Administration (FDA) approval of the Pfizer-BioNTech vaccine on Monday will result in those who have been skeptical to change their minds and get vaccinated. However, Florida Republican Gov. Ron DeSantis, who has made several moves to bar vaccine mandates in his state, has implied that he probably wouldn’t try to encourage vaccination any harder if it got approval.

Indeed, as of press time (and a number of hours after the FDA’s announcement), DeSantis’s official Twitter account still hasn’t tweeted about the Pfizer-BioNTech vaccine, nor has he sent out any encouragements to constituents to get vaccinated as a result of its official approval. Instead, he has touted the opening of more monoclonal antibody treatment centers, a beneficial treatment that can help people avoid hospitalization if they’ve tested positive for coronavirus, but at a rate that’s much lower than getting vaccinated and generally only effective in the first few days of a person identifying their diagnosis.

Critics have suggested that DeSantis may benefit politically, in the form of campaign contributions from corporate donors, from the use of that treatment option rather than the pushing of vaccines. The governor’s PAC has received millions from a hedge fund executive who works for a company which has heavily invested in Regeneron Pharmaceutical Inc., the company that created the monoclonal treatment.