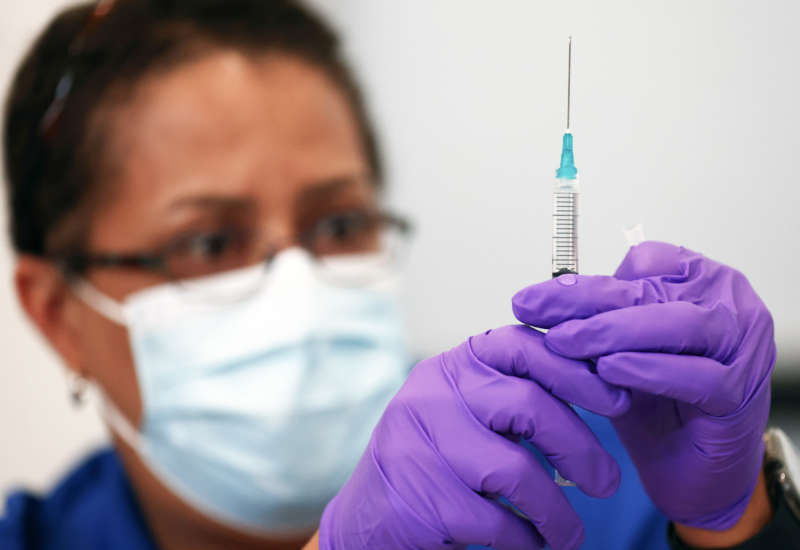 The Pfizer vaccine previously only had emergency use authorization (EUA), which meant that the FDA had deemed it safe and approved for the duration of the emergency declaration for the pandemic. While the FDA used the best available evidence based on clinical trials for the EUA, full approval required more evidence that the vaccine is safe and effective.

Full authorization of the vaccine may pave the way for employers to require workers to get vaccinated. Health officials are also hopeful that the FDA’s approval will also convince people who have yet to be vaccinated to get the shot.

“For businesses and universities that have been thinking about putting vaccine requirements in place in order to create safer spaces for people to work and learn, I think that this move from the FDA … will actually help them to move forward with those kinds of plans,” Surgeon General Vivek Murthy told CNN on Sunday.

While some organizations have been waiting for full FDA approval to require vaccines, places like the California State University System and companies like Google and Facebook have put mandates into place. Universities have been facing lawsuits over mandates, but the Supreme Court denied vaccine mandate challengers a win earlier this month in a lawsuit brought by Indiana University students.

Most Americans are supportive of vaccine mandates, according to recent polling. A Morning Consult/Politico poll from earlier this month showed that 56 percent of nearly 2,000 registered voters polled supported local governments requiring vaccines for all Americans except for those who are medically exempt from the vaccine. Over 8 in 10 Democrats and over half of independents approve of such mandates, while only 35 percent of Republicans support those measures.

Last week, the White House announced a plan to begin providing booster shots to U.S. adults who previously received a two-dose vaccine. The plan, endorsed by the FDA and an advisory committee of the Centers for Disease Control and Prevention (CDC), will allow adults to get a booster shot eight months after their last dose. evidence that getting a booster will help protect people against COVID for longer.

Pfizer’s FDA approval comes as U.S. vaccination rates have slowed precipitously since spring. Vaccination rates peaked in April, when over 3 million doses were being administered a day on average, according to The New York Times’s vaccine tracker. Now, only about 800,000 are being administered on average every day, and only 73 percent of American adults have received at least one dose.

As vaccination rates have slowed, the virus has surged across the country, largely due to the highly transmissible Delta variant. After reaching lows in June, case counts have soared to levels seen last winter, averaging nearly 150,000 cases and over 1,000 deaths a day as of Sunday.

The virus is also ripping through schools that have returned to in-person teaching. Children under 12 are not yet eligible for any of the approved vaccines, and children with COVID are filling up hospitals. Dozens have died.

According to polls, nearly 7 in 10 Americans are also in favor of mask mandates for schools.

But Republicans have politicized the issue, opposing not only mask mandates but also vaccine mandates, despite evidence in July that the U.S.’s vaccine campaign has saved about 279,000 lives and prevented 1.25 million hospitalizations.

Still, right-wing firebrands like Governors Greg Abbott of Texas and Ron DeSantis of Florida have signed orders to bar localities and school districts from implementing mask mandates in schools. In his July order, Abbott also barred local and state agencies from creating a vaccine mandate.

Republicans make up one of the largest demographic groups of people who are still unvaccinated and still are the most staunchly against getting a vaccine. Kaiser Family Foundation polling from June found that those who say they will never get vaccinated are more likely to be white and Republican. Those in the “wait-and-see” group, meanwhile, are more likely to be Black and Latinx and represent a more equal split between party affiliation.