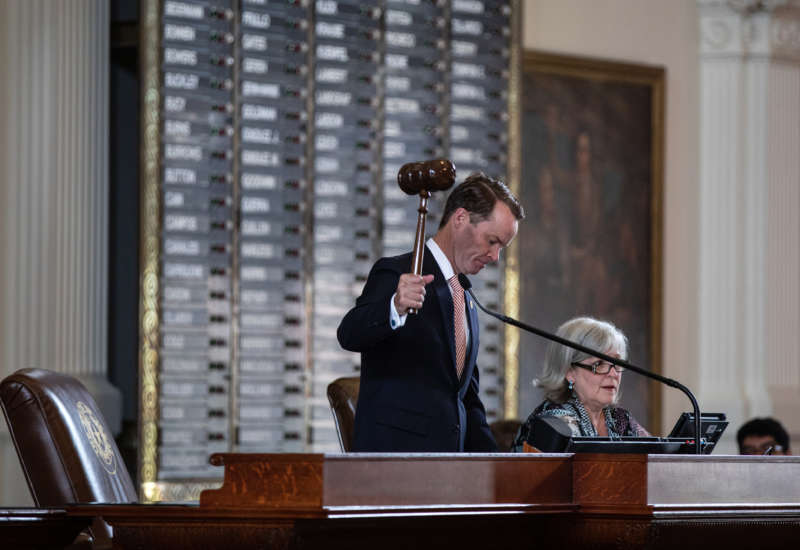 Texas’s Speaker of the House warned representatives in the Texas State House on Thursday night not to use the word “racism” when debating the Republicans’ voter suppression bill..

Speaker Dade Phelan, a Republican, started debate on the bill by saying “the chair would appreciate members not using the word ‘racism’ this afternoon,” according to the Houston Chronicle. He insisted that it was a matter of respect.

Republican legislators in Texas have been objecting to claims that their voter suppression bill, or S.B. 1, is racist. The bill has been slammed by voting rights advocates and Democrats like Rep. Alexandria Ocasio-Cortez (D-New York) as the “Jim Crow 2.0” for its prohibitive voting requirements and overtly racist voting restrictions.

In April, the Houston Chronicle reported that GOP Lieutenant Governor Dan Patrick said, “you’re in essence calling us racist, and that will not stand,” in response to these Democratic criticisms of the bill’s racist effects.

The chamber advanced the bill 79 to 37, with only one Republican voting no. It is expected to pass in a floor vote on Friday, after which it goes back to the Texas State Senate, where senators can pass the new bill or reconcile differences between a similar bill previously passed by the chamber.

If passed, the bill would ban 24-hour and drive-through voting, voting options that have been championed as expanding access in nonwhite communities. It would make it harder for people with disabilities to vote by restricting the ability of those who help them turn in their ballots. And, among a slate of other restrictions, it would also bar local election officials from sending unsolicited mail-in ballot applications, with the aim of restricting mail-in voting.

Democratic lawmakers pointed out the bill’s implicit and explicit racist effects in debate on Thursday night.

Hinojosa was referencing past court rulings against Texas election law, including a 2012 ruling finding that Texas lawmakers didn’t comply with the Voting Rights Act when drawing district maps that cycle. “Intentional discrimination against people of a different race…” Hinojosa said. “Is that racism?”

Phelan interjected, saying, “we can talk about racial impacts with this legislation without accusing members of this body of being racist.” Hinojosa pointed out that she hadn’t accused any one lawmaker as being racist.

Democrats expressed frustration and anger over Phelan’s attempted ban on discussing racism in the chamber. “Wow. The Speaker just asked us to not use the word ‘racism’ during debate today,” wrote Democratic Rep. Erin Zwiener on Twitter. “SB 1 will harm the freedom to vote for all Texans, but it will disproportionately impact people of color. That’s racist, no matter how you dress it up. Period.”

“One Republican has already filed an amendment to put the ‘Souls to the Polls’ provision that would limit black churches voting on Sunday morning back in the bill. It’s racist,” Zwiener continued. “Coddling R legislators who are uncomfortable about how this bill hurts people of color is not our job.”