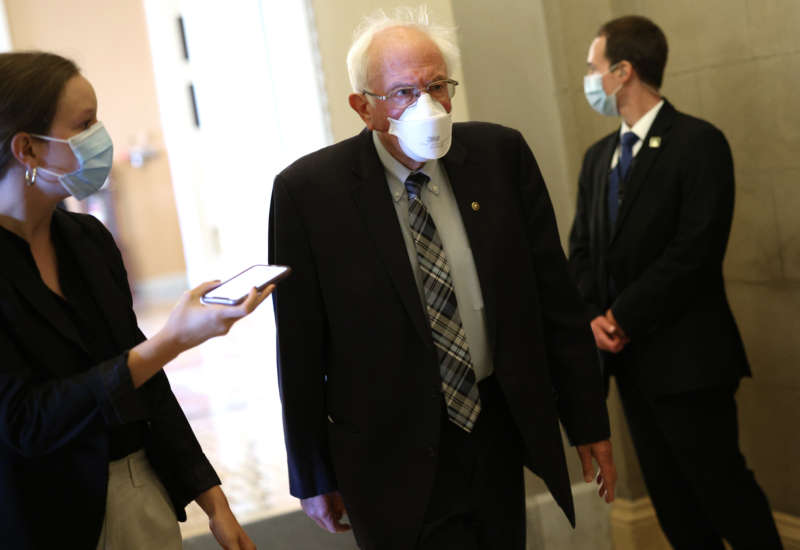 Yesterday afternoon, a trio of conservative Democrats joined every Republican on the House Energy and Commerce Committee, blowing a $600 billion hole in President Biden’s plans to reform Medicare and prescription drug purchasing by way of the Build Back Better Act. Their efforts ultimately failed thanks to some deft maneuvering by the speaker of the House, but the betrayal happened in broad daylight nonetheless. Those three Democrats, you see, had “concerns.” As it turns out, so do I.

One of the culprits, Democratic Rep. Scott Peters of California, is the top House recipient of campaign donations from the pharmaceutical and health care industries. His San Diego district is home to thousands of research and drug development workers. His wife, Lynn Gorguze, is president and CEO of Cameron Holdings, “an investment firm whose portfolio company provides manufacturing and packaging for pharmaceutical companies,” according to Andrew Perez and David Sirota of The Daily Poster.

A second culprit, Democratic Rep. Kurt Schrader of Oregon, enjoys similar campaign financing largesse from the pharmaceutical and health care industries. His net worth is pegged around $8 million, at least a portion of which came by way of an inheritance from his grandfather, who was “vice president and director of biochemical research and development at Pfizer,” according to The Oregonian.

…And the penny drops, literally. It’s more than campaign money for these two. It’s in the family. That would explain why they voted against their own president and party to derail a series of reforms that are massively popular not just with Democrats and the general public, but with Republican voters as well. Even Donald Trump tried to jump on this particular bandwagon, not because he thought it was right, but because voters like it so much.

Peters and Schrader did not cast these votes in self-defense, to be sure. The Democratic Congressional Campaign Committee (DCCC) maintains a list of “frontline” Democrats who are vulnerable to defeat come 2022, and neither Peters nor Schrader made that list. In fact, both of them — along with the third “no” vote from yesterday, Rep. Kathleen Rice of New York — hail from very safe districts.

More to the point, the Democrats who face tougher races in 2022 strongly support the reforms that were voted down, because these reforms are so popular in swing districts. If those “frontline” Democrats don’t have these reforms to vote on, they are made more vulnerable.

After the vote, Vermont Sen. Bernie Sanders, chairman of the Senate Budget Committee, came out swinging. Declaring that “the pharmaceutical industry owns the Republican Party and that no Republican voted for this bill,” Sanders went on to say that, “there is no excuse for every Democrat not supporting it. At a time when the drug companies are charging us by far the highest prices in the world, Congress must demand that Medicare negotiate prices with this extremely greedy and powerful industry.”

The process is threatened with collapse because of a pack of conservative Democrats beholden to greedy pharmaceutical companies and polluting coal barons.

Sanders has been spoiling for this fight for just about the full term of his political life, and he’s not wrong about the strength of his long-despised opponent. “The drug industry has spent years donating to political campaigns, lobbying members of Congress, and developing allies in the business community,” reports The New York Times. “They are now urgently leveraging those relationships. PhRMA announced a ‘seven-figure’ advertising buy on Wednesday, and published an open letter in several Washington publications, adding to television ads running on national news programs and football broadcasts. It’s a playbook that other powerful health lobbies have used.”

Fortunately, there is more than one way to skin a cat in Washington, D.C. After the PharmaDem betrayal in the Energy and Commerce Committee, Speaker Pelosi was able to get the House Ways and Means Committee to advance the same package of Medicare and drug pricing reforms to the House floor, where they will join the rest of the bill for the fraught road ahead. Peters, Schrader, Rice, every Energy Committee Republican, along with Pfizer and its pals, found themselves outflanked for the moment.

There is a vein of bright, shining irony shot through this whole debacle. After Joe Biden became president, the amen corner that is the corporate “news” media fell over themselves voicing warnings of how his legislative agenda would be foiled because of Rep. Alexandria Ocasio-Cortez, “The Squad,” and the Progressive Democratic Caucus in general. Even the slightest bit of static between that cohort and the speaker’s office elicited howls of, “OOOOO, IT’S ON NOW, DEMS IN DISARRAY!” Hardly a day went by without some talking head grimly predicting a progressive uprising against Biden’s agenda.

Flash forward to the debate over the most consequential piece of legislation in generations, and it has been the progressives offering the steady, guiding hand. They have shown their teeth when necessary, and may do so again if there is a concerted effort to decouple the budget reconciliation bill from the infrastructure bill, but they have been striving to shape the legislation and usher it forward.

Instead, the process is threatened with collapse because of a pack of conservative Democrats beholden to greedy pharmaceutical companies and polluting coal barons. Bob Dylan was right: Money doesn’t talk, it swears.