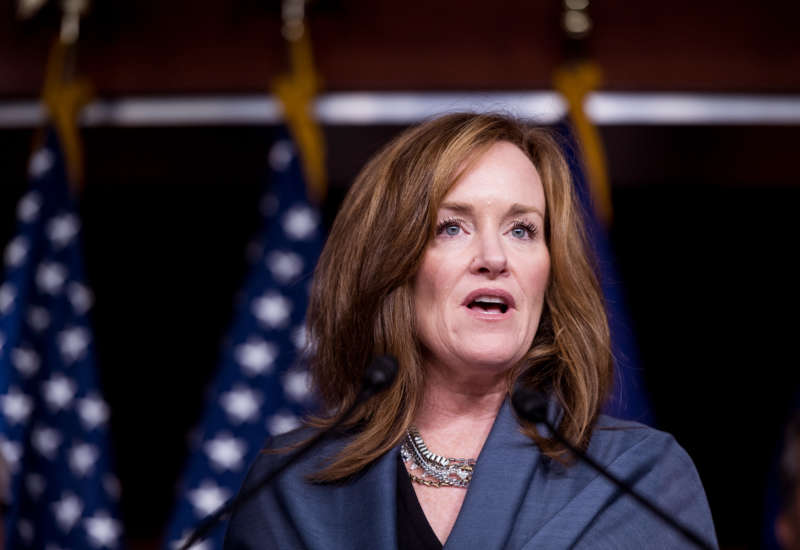 In the two 30-second spots — titled “Sellout” and “Patients Over Profit” — multiple sclerosis patient Therese Ball slams Peters (D-Calif.) and Rice (D-N.Y.) for prioritizing the interests of the pharmaceutical industry, which has lobbied aggressively against the Medicare drug-pricing proposal.

“The medications I need to live are priced at over $7,000 every month. I can’t afford these prices. I don’t know how anybody can,” Ball says in the ad aimed at Peters, a major recipient of pharma donations who, like Rice, hails from a safe Democratic district. During the 2020 election cycle, Peters raked in campaign cash from Pfizer, Merck, Johnson & Johnson, Gilead, and other pharmaceutical giants.

“It makes me so angry that members of Congress are choosing Big Pharma over patients,” Ball continues. “It’s unforgivable.”

The ads, launched by Patients for Affordable Drugs Now, urge Peters’ and Rice’s constituents to call their offices and demand that they “stop selling us out to drug companies” and “put lower prices for patients before drug company profits.”

Earlier this week, Peters, Rice, and Rep. Kurt Schrader (D-Ore.) teamed up with Republicans to block a Medicare price-negotiation plan from passing out of the House Energy and Commerce Committee, potentially imperiling Democrats’ efforts to include the provision in their emerging reconciliation package. As The Oregonian reported following the vote, Schrader “inherited a fortune from his grandfather who was a top executive at pharmaceutical giant Pfizer, has accepted large donations from Big Pharma during his seven terms in Congress.”

Under current federal law, Medicare is barred from negotiating prescription medicine prices directly with pharmaceutical companies, which have virtually unchecked power to set prices as they please — one of the primary reasons the U.S. pays far more for the same drugs than other rich countries.

Democrats’ proposal — a version of which Peters, Rice, and Schrader voted for just two years ago — would empower the secretary of Health and Human Services to negotiate prescription drug prices on behalf of Medicare. The negotiated prices would then be made available to Medicare recipients as well as patients on private insurance plans.

While the proposal failed to advance out of the Energy and Commerce Committee, the House’s chief tax-writing panel approved the provision earlier this week, offering some hope that the key drug-pricing language will ultimately end up in the final reconciliation bill. Democrats believe their plan would dramatically slash costs for patients and result in hundreds of billions of dollars in federal savings, which could then be used to fund an expansion of Medicare benefits.

David Mitchell, a cancer patient and founder of Patients for Affordable Drugs Now, said in a statement Friday that “we will not stand by while these representatives attempt to block effective Medicare negotiation legislation that would bring relief 90% of Americans are demanding.”

“We look forward to the full House and Senate enacting effective Medicare negotiation legislation in the reconciliation package that will ensure patients get the innovation we need at prices we can afford,” Mitchell added.