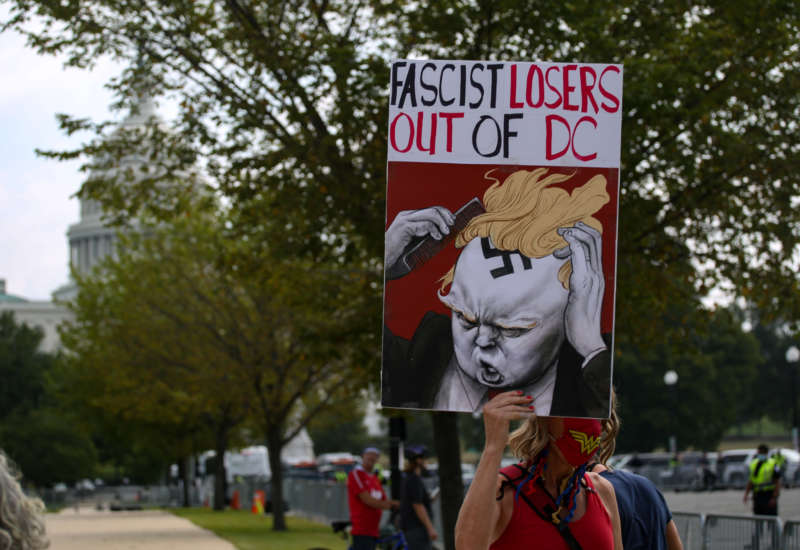 On Nov. 3, 2020, the American people conclusively decided to make Donald Trump their first one-term president in more than a quarter-century. On every previous occasion when an incumbent president was defeated — it had happened 10 times before Trump, the loser president at least swallowed his pride and honored the democratic process. Trump tried his hardest to remain in power anyway, fulfilling George Washington’s prophecy that a demagogue would manipulate partisanship “to the purposes of his own elevation, on the ruins of public liberty.”

Trump’s Big Lie about the 2020 election is being used to justify a wave of voter suppression laws throughout the nation, all of them intended to prevent the left-center majority coalition assembled by Barack Obama in 2008 from returning to power. If the voter restrictions passed in Georgia are especially odious, other states are also doing their utmost to make sure that local election officials are beholden to Trumpist Republicans (such as a secretary of state) rather than the voters.

The larger trend here is to directly erode the democratic process by making sure that Republican elected officials can decide elections if they don’t like the voters’ choices. Trump’s oft-stated contention that the only way he could lose was through fraud is becoming, in essence, the law of the land in many states. It’s easy to see how this logic can be extended to any election that Republicans believe, or at least claim to believe, that they should have won but instead lost. This is how fascism grabs a foothold, as Federico Finchelstein, chair of the history department at the New School for Social Research and author of A Brief History of Fascist Lies, told me in a recent interview.

In his book, Finchelstein told me, he explores connections between how fascists lied in the past and how contemporary fascist leaders like Trump or Brazil’s Jair Bolsonaro lie in the present. “There are many connections because they lie in the same way.” Ordinary politicians sometimes (or frequently) lie to protect their own interests or advance a specific cause, but fascists make a point of fabricating issues out of thin air. They don’t merely exaggerate, dissemble or put a biased spin on things.

“They want to change the world in order for the world to resemble those lies,” Finchelstein explained, describing how Spain’s fascist leader Francisco Franco was obsessed with “making people live those lies.” It is a universal and unmistakable characteristic of fascist politics, he said, but “not typical of other political traditions.”

Overturning elections based on Big Lies is only one Republican method of suppressing votes. They are also using the same tactics perfected by Jim Crow politicians in the South. In the aftermath of Trump’s 2020 election Big Lie, more than two dozen laws that make it harder to vote have been passed in at least 18 states. The bulk of the legislation focuses on little details here and there that, on their face, seem innocuous, but far more likely to impact low-income Black and brown voters. These include measures that limit voting days, voting hours and drop boxes, restrict assistance to voters, bar sending out unsolicited absentee ballot applications and add new voter ID requirements.

Jamelle Bouie of The New York Times recently explained how these policies are similar to those that smothered democracy for Black people during the Jim Crow era. To reject that similarity, he wrote, “mistakes both the nature and the operation of Jim Crow voting laws”:

There was no statute that said, “Black people cannot vote.” Instead, Southern lawmakers spun a web of restrictions and regulations meant to catch most Blacks (as well as many whites) and keep them out of the electorate.

One of the lessons of the South after Reconstruction is that democratic life can flourish and then erode, expand and then contract. Democracy is not a solid state, and we should be wary of politicians who would undermine any part of it for partisan advantage.

Similar policies also inspired the most infamous fascist regime of all in Nazi Germany. As Yale law professor James Q. Whitman explains in Hitler’s American Model: The United States and the Making of Nazi Race Law, Nazi lawyers closely studied Jim Crow laws and used them as a model for their Nuremberg Laws, passed to legally degrade Jews both as citizens and as a race. The Nazis kept close tabs on American race policies and used them to come up with ways of disenfranchising groups they wished to keep marginalized, although even they sometimes found American methods to be too brutal.

Like an ouroboros devouring its own tail, the American proto-fascism that inspired actualized German fascism is now returning in a mutated form to its birth soil.

“Fascism always takes on the nationalist character of its own country,” said Yale philosopher Jason Stanley, author of How Fascism Works: The Politics of Us and Them, in an interview with Salon. “One would expect this particular version of fascism to be derived from our own American past.” In addition to drawing from Jim Crow methods, this revived American fascism uses gerrymandering, the filibuster and the vagaries of the Electoral College to make sure that Republicans hold a vastly disproportionate share of power. These methods existed long before Donald Trump, but his embrace of fascist political methods, has created the conditions for previously normal conservatives to become fascists.

“Hitler won a minority, but was placed into power as a sort of compromise, with the thinking that he could be easily controlled,” Stanley said. Instead, Hitler’s movement wound up taking over the system itself, changing its character and altering what was perceived as normal.

Could it happen here? Not long ago, Rep. Eric Swalwell, told me that he believed many of his Republican colleagues were effectively supporters of the Jan. 6 coup attempt. “I look at [Mo] Brooks and [Marjorie Taylor] Greene and [Lauren] Boebert and think that if they weren’t inside the chamber that day as members of Congress, they would have been outside the chamber that day as part of the mob,” Swalwell said.

It is telling, and tragic, to juxtapose Swalwell’s observation with Thomas Jefferson’s observation about a different “revolution,” the 1800 election, the first in which a vanquished president peaceably gave up power. John Adams loathed losing that election to Jefferson, his former and future friend, but knew that he had to accept the result for the sake of democracy. It was a moment almost as important to the history of democracy as Washington relinquishing power at the end of his presidency.

This was as important as the revolution of 1776, Jefferson later wrote, because it was “not effected indeed by the sword, as that, but by the rational and peaceable instrument of reform, the suffrage of the people. The nation declared its will by dismissing functionaries of one principle, and electing those of another in the two branches, executive and legislative, submitted to their election.”

We are in grave danger of abandoning the ideals of Washington, Adams and Jefferson and veering into the darkest areas of the American id — those that inspired Hitler and the Nazis.