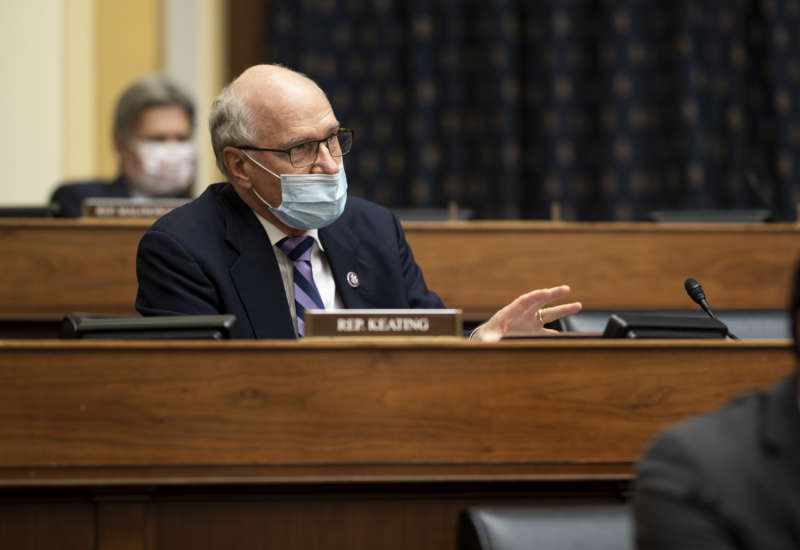 The House of Representatives last Thursday voted overwhelmingly to reject two amendments that would have reduced the military’s budget for 2022 — one to cut it by 10 percent and another that would have lopped off just 3 percent. Republicans voted unanimously against both measures, while the Democratic caucus split on both.

With neither amendment passing, the National Defense Authorization Act (NDAA) for Fiscal Year 2022 authorizes $768.1 billion in discretionary funding for the Department of Defense, as well as military activities conducted at the Department of Energy and other agencies. The bill, which was passed 316-113, increases military spending by $36.5 billion above the amount that was authorized by the 2021 NDAA, which included the authorization of billions in overseas contingency operations funding that is not included in the current bill.

The amendment to cut the budget by 10 percent, which was offered by Rep. Alexandria Ocasio-Cortez, was rejected by a vote of 86-332. It would have applied a 10% reduction to all the accounts and funds authorized by the NDAA besides those for the Defense Health program, military personnel, and civilian employee pay.

The Democrats who voted against the 10 percent reduction in the Pentagon budget have received, on average, 3.7 times more money in the form of campaign contributions from the defense sector since January 2019, according to an analysis of OpenSecrets data by the Security Policy Reform Institute and Sludge. The average amount of defense cash received by Democrats who opposed the amendment was $60,680, while the Democrats who supported it received an average of $16,497 from the industry. Funding from the defense sector as defined by OpenSecrets includes contributions from the PACs of Defense Department contractors like Raytheon and Lockheed Martin, as well as donations larger than $250 from those companies’ employees.

During debate of the amendment, Ocasio-Cortez, who offered the amendment as the designee for its sponsor, Rep. Mark Pocan (Wisc.), said that cutting the approximately $77 billion from the budget would be easy to do without harming military readiness.

“The Pentagon could save almost $58 billion by eliminating obsolete weapons, weapons like Cold War-era bombers and missiles designed and built in the last century that are completely unsuitable for this one,” said Ocasio-Cortez. “We could find another $18 billion by simply preventing the end-of-year spending sprees that lead to contract money being shoveled out the door every September.

“Each September, as offices at the Pentagon go on last-minute spending sprees to justify next year’s budget increases, we have increased our military spending year after year, senselessly and needlessly. And now, again, during a time when we have ended an almost two-decade war, there is no reason for us to be increasing our military spending and our defense budget when we are not funding childcare, healthcare, housing priorities, and the climate crisis here at home.”

In nominal terms, the 2022 Pentagon budget proposed by President Biden is the highest since World War II, and over $12 billion more than the final bill under President Trump. Controlling for inflation, the spending authorized by the NDAA is just behind the amount in 2007-2011, during which time there were back-to-back troop surges, first in Iraq and then in Afghanistan. In terms of per-year expenditures, the amount authorized by this bill is well over twice as large as the $3.5 trillion reconciliation bill currently being developed by congressional Democrats.

The amendment to cut three percent from the NDAA’s top-line figure and restore it to the level it was at before a Republican amendment to add $23.9 billion was adopted in the House Armed Services Committee received support from the majority of the Democratic caucus, but still fell far short of passing by a vote of 142-286. The 77 Democrats who opposed the 3 percent cut have received, on average, $52,211 from the defense sector since January 2019, and the 142 Democrats who supported it have received an average of $35,898.

The chairman of the Armed Services Committee, Rep. Adam Smith (D-Wash.), has been the top Democratic recipient of defense industry cash since 2019, according to OpenSecrets data. Smith, who has received $542,370 from defense interests during the period, last year labeled some Democrats who want to cut the Pentagon budget “extremists,” though he later walked back that statement in comments to Sludge. Smith voted against the amendment yesterday afternoon to reduce the Defense budget by 10 percent and in favor of the amendment to reduce it by 3 percent.

More than half of the public sector funds authorized by the NDAA will end up being transferred to the private sector. Since FY 2001, military contractors have received over 54% of Pentagon spending, totaling about $8 trillion. Over $2.2 trillion of that went to the five largest weapons firms: Lockheed Martin, Raytheon, General Dynamics, Boeing, and Northrop Grumman. These five firms comprise about 40% of military industry cash given to federal candidates.

Editor’s note: For the vast majority of House members, the data used in this analysis spans contributions received from Jan. 1, 2019 through June 30, 2021. For twenty-one House members, all freshmen, some contributions may be included in the analysis that were received in prior election cycles when they had been candidates.

Judge Who Signed Off on FBI Raid Made Anti-Trump Posts

I Am Groot is delightfully inconsequential

These Canon cameras are secretly Robots in Disguise

Microsoft reportedly lays off team focused on winning back consumers