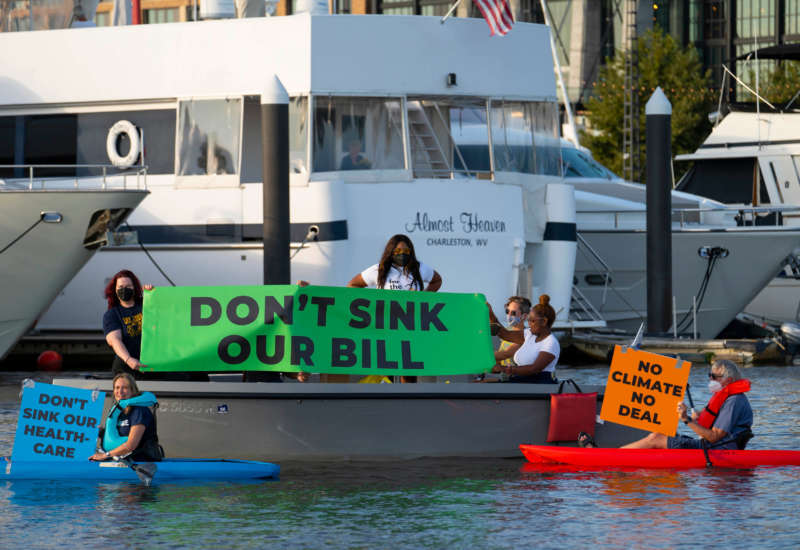 “West Virginians have been trying to reach Sen. Manchin every way we know how to tell him we need this bill to bring jobs to WV, to extend the Child Tax Credit for our families, to expand access to healthcare, to fund the home care our elderly and disabled community members deserve,” Loretta Young, executive director of Race Matters WV, said in a statement.

“Seventy-nine percent of West Virginians want this bill!” Young added. “And yet, Sen. Manchin is still blocking it. He’s not listening to us, he’s listening to Big Money. That’s why we’re here at his yacht in D.C. today.”

Manchin, a coal profiteer and the chair Senate Committee on Energy and Natural Resources, is one of around a dozen conservative Democrats in Congress working to water down their party’s reconciliation package, objecting specifically to proposed tax hikes on the rich and corporations, a clean electricity standard, Medicare expansion, drug price reforms, and other elements of the plan.

According to campaign finance data compiled by OpenSecrets, Manchin is the Senate’s top recipient of oil, gas, and coal industry donations.

“Manchin needs to realize that the fossil fuel industry is about to keel over and we refuse to let it drag the rest of us down with it,” John Noël, a senior climate campaigner at Greenpeace USA. “Congress cannot fall for Big Oil’s false choice between a healthy economy and a healthy planet. The truth is with fossil fuels we get neither.”

Flotilla for a full deal!

TODAY: Did you know Joe Manchin lives on a yacht in DC?

These West Virginians did.

Frustrated that he’s not hearing them at home, they came all the way to his DC yacht. Listening yet, @Sen_JoeManchin?!

Progressive campaigners have emphasized that by hampering progress on the reconciliation package, Manchin is at odds with his own constituents.

According to a recent survey conducted by the nonprofit WorkMoney, 80% of more than 800 West Virginians polled believe Manchin — a key swing vote in the evenly divided Senate — should support the reconciliation bill, which is still taking shape in congressional committees.

“In West Virginia, it’s no secret that we need jobs, we need healthcare, we need to get ahead of the transition to clean energy, we need lower prescription drug prices,” said Takeiya Smith, executive director of Young West Virginia. “And the reconciliation bill provides for all that at no cost! It’s paid for by taxing the rich and big corporations, and letting Medicare negotiate drug prices.”

“This is the moment to deliver a historic package to West Virginians and all Americans, and we need Sen. Manchin to move it forward, not hold it back,” Smith added. “We’ve been in the streets and in his offices in West Virginia, and now we’re here in D.C., at his yacht, to tell him to listen to his constituents. Pass this bill.”