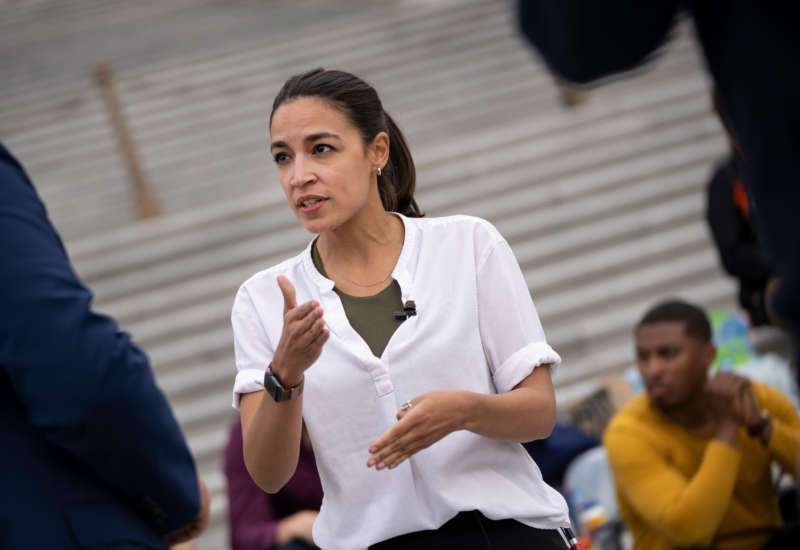 The progressive activists in the stands at Wednesday night’s congressional baseball game held up a series of banners, one of which said “Dems Don’t Fuck This Up,” and another that read “Our Lives Are a Game: Pass $3.5T.” A third banner declared: “Reconciliation First / Hold the Line.”

While the Democrats went on to lose the charity game to their Republican opponents, the messaging from the crowd mirrored the overnight blitz of messaging ahead of a still uncertain vote in the House tentatively scheduled for Thursday on a bipartisan infrastructure bill that has become a proxy war over the Democratic Party’s agenda — one in which a handful of corporate Democrats, including Sens. Joe Manchin of West Virginia and Kirsten Sinema of Arizona, have teamed up with a number of industry-backed Democrats in the House, to block passage of sweeping social investments contained in the large Build Back Better Act, including expanding Medicare, universal pre-K, tuition-free community college, extension of a more robust childhood tax credit, and aggressive investments to tackle the climate crisis.

At least some of the banner drops at the game were organized by a group called the People’s Watch, which says it has had “enough” of obstruction and delay and is calling on Democrats to pass the “full recovery agenda” promised by the Biden administration and on which so many Democrats ran in 2020.

Our lives are not a game. Stop playing around, and pass the $3.5 trillion reconciliation bill NOW.

Thanks @maddow for covering our presence at the #CongressionalBaseballGame. pic.twitter.com/vNrmHBGfPK

The message from members of the Congressional Progressive Caucus, led by chair Rep. Pramila Jayapal (D-Wash.), has been consistent for months: that the larger reconciliation package must be passed by both the Senate and the House first before a smaller, and they say much weaker infrastructure bill, known as the Bipartisan Infrastructure Framework (BIF), receives a vote on the floor.

On Wednesday evening, just after Manchin released a statement saying that he is still unwilling to agree to the top-line number and the specifics contained in the $3.5 reconciliation package, Congresswoman Jayapal warned that if the obstruction by Manchin and Sinema persists, “this whole thing is not going to happen.”

“I can tell you that his statement has just probably created at least a bunch more votes on the House floor against a bipartisan bill,” Jayapal said.

Later, appearing on MSNBC’s “All in With Chris Hayes,” Jayapal reiterated that message and said her fellow progressives in the House remained prepared to stand against the bipartisan bill until a deal over reconciliation is reached.

“We are going to make sure we deliver the entirety of the president’s agenda,” she said, “because guess what, 96% of Democrats in the House and the Senate agree that that’s the right thing to do. The president agrees. And 70% of the American people agree and we need to deliver that transformative [plan].”

As many political observers and operatives have noted in recent days — and not all of them strict progressives — Democrats could pay a huge price in the 2022 midterms if they fail to deliver on their agenda. And as Sen. Bernie Sanders (I-Vt.), chair of the Senate Budget Committee, argued in an op-ed published Wednesday, the stakes for the American people are too high to let a small handful of Democrats beholden to powerful industries stand in the way of the people-centered agenda that President Joe Biden and other Democrats have put forward.

“This reconciliation bill is being opposed by every Republican in Congress as well as the drug companies, the insurance companies, the fossil fuel industry, and the billionaire class,” wrote Sanders. “They want to maintain the status quo in which the very rich get richer while ordinary Americans continue to struggle to make ends meet. Well, I disagree.”

Sanders said he believes that “now is the time, finally, for Congress to stand up for working families and have the courage to take on the big money interests and wealthy campaign contributors who have so much power over the economic and political life of our country.”

On Wednesday night, speaking to CNN, Sanders said his prediction was that the BIF would not succeed if brought to the floor on Thursday:

The bipartisan infrastructure bill “will not succeed” if it gets a vote in the House tomorrow, says Sen. Bernie Sanders.

“If we pass that bill tomorrow, we lose the leverage that we have here,” he says referring to Democrats’ economic spending package. pic.twitter.com/6vcVsWzpMj

Rep. Alexandria Ocasio-Cortez (D-N.Y.), a prominent member of the so-called Squad and CPC member, also took to MSNBC on Wednesday evening and explained to Rachel Maddow that she and her colleagues have been consistent for months about their position and what the agreement has been. She also explained in detail why it’s vital — as the protesters at the congressional baseball game and elsewhere continue to demand that Democrats “hold the line” by making sure the bills pass together — because otherwise the powerful K Street lobbyists opposed to the social investments and higher taxes on corporations and the very rich will have a much easier time killing that plan.

While Ocasio-Cortez said she was optimistic about the possibility of an ultimately positive outcome, she vowed that progressives are ready to stand firm.

“And so,” she concluded, “that’s what we’re going to do and we believe that it actually will force people back to negotiating table and make sure that we deliver both pieces.”

“The read that we have is that they’ll just dump the second one [the BBB bill], leave the other one out to dry and just never actually vote on it.” – Rep. Ocasio-Cortez on why progressives are insisting that the infrastructure bills remain paired. @AOC pic.twitter.com/QFILHu6Q0m

“Passing the Build Back Better Act will require standing up to powerful special interests,” the CPC tweeted on Wednesday. “That’s why corporate lobbyists, Big Pharma, and Wall Street executives have declared all-out war to stop the bill. We’re not backing down.”

With progressives standing united and firm, and no clear movement yet from Manchin or Sinema, it remained unclear early Thursday whether House Speaker Nancy Pelosi would follow through with the scheduled vote or postpone it pending further negotiations.