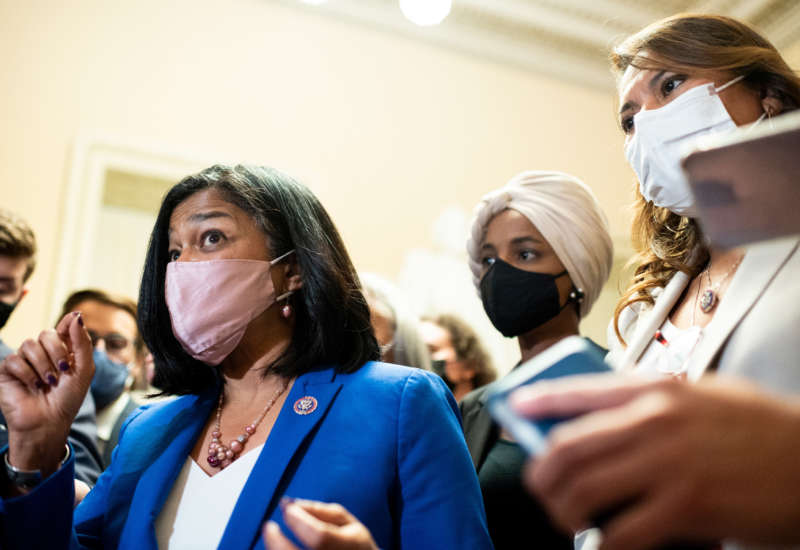 The House Democratic leadership on Thursday was once again forced to delay a scheduled vote on a bipartisan infrastructure bill as progressive lawmakers — acting as a coordinated bloc — held firm to their longstanding demand that Congress pass a reconciliation package first.

Negotiations over the reconciliation bill, known as the Build Back Better Act, are expected to drag on Friday as conservative Democrats continue their efforts to slash the legislation’s price tag, which was initially set at $3.5 trillion over 10 years after progressive lawmakers compromised down from roughly $6 trillion.

Sen. Joe Manchin (D-W.Va.), an author of the bipartisan infrastructure package and one of the reconciliation bill’s principal obstacles, is demanding that at least $2 trillion be lopped off the latter’s top-line spending level — a move that would likely force major cuts to proposed investments in green energy, child care, housing, and more.

“It would mean decimating vital, important programs for working families,” Sen. Bernie Sanders (I-Vt.), chair of the Senate Budget Committee and the architect of the $3.5 trillion plan, warned Thursday. “Obviously we could not do for the children what has to be done, we cannot do for seniors what has to be done. We would not be able to do paid family and medical leave.”

“The planet is at stake,” Sanders added. “We got four or five years before there is irreparable harm, and clearly $1.5 trillion would make it absolutely impossible for us to do what has to be done.”

Since June, members of the Congressional Progressive Caucus (CPC) have made clear that they would not vote for the Senate-passed bipartisan bill — a $550 billion proposal focused on physical infrastructure — until both chambers of Congress approve a reconciliation package that includes their social spending priorities, a strategy that Sanders and nearly a dozen other senators have endorsed.

Progressives say they have enough votes to kill the bipartisan bill if it hits the House floor — and Pelosi appears to know it.

That sound you hear is the Build Back Better agenda still alive and kicking. Thanks @USProgressives. https://t.co/Z1dWoD7f3t

Contrary to the narrative spun by conservative Democrats and some corporate media outlets, progressives argue that they are the ones working to ensure the passage of President Joe Biden’s entire agenda as a small cadre of right-wing lawmakers attempt to tank a crucial component of it — the Build Back Better Act.

“By allowing one bill to advance without the Build Back Better Act alongside it, we leave behind childcare, paid leave, healthcare, climate action, education, and a roadmap to citizenship,” Rep. Pramila Jayapal (D-Wash.), the chair of the CPC, said late Thursday. “We’re not going to leave working people, families, and our communities behind.”

“Four percent of all the Democrats in the House and the Senate are blocking the Build Back Better Act from passing,” she added in an appearance on MSNBC. “Ninety-six percent agree with us. The president agrees with us.”

After both the New York Times and the Washington Post characterized the delayed vote as a major “setback” for Biden’s domestic policy agenda, Rep. Jared Huffman (D-Calif.) replied that progressives “are setting the Biden agenda back on track, not setting it back.”

Speaker Nancy Pelosi’s (D-Calif.) decision to postpone the infrastructure vote until at least Friday came after Rep. Josh Gottheimer (D-N.J.) — a leading corporate-backed conservative in the House Democratic caucus — told the press that he was “1,000%” certain the bipartisan bill would pass Thursday night.

Rep. Ilhan Omar (D-Minn.), the CPC whip, responded: “In Congress, we don’t make predictions like this until we know we have the votes. Some of us get this, others bluff and fall on their face.”

“Hopefully,” Omar added, “Rep. Josh Gottheimer and the other 4% of Democrats will not obstruct but negotiate and help us get the president’s agenda done for the people.”