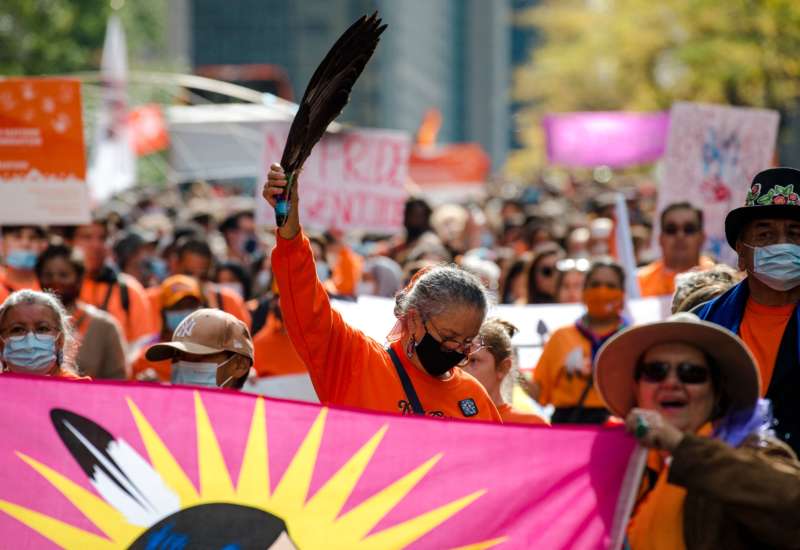 Thousands of Indigenous people across the U.S. and Canada — wearing orange shirts and the weight of their ancestors on their shoulders — turned out Thursday to remember the children who suffered in residential schools during a dark history in North America.

The Native American Boarding School Healing Coalition announced support for the bill Thursday, calling for “a full accounting of the devastating impacts of the Indian boarding school policies that tore away generations of Native American children from their families and communities.”

“It has been a long time coming,” Ruth Buffalo, Hidatasa/Mandan, Chiricahua Apache, the coalition’s board president and a North Dakota state representative, told Indian Country Today.

“With any traumatic events, the first step is acknowledgement,” she said. “We think of the survivors and those who died away from their families.”

“The Indian Boarding School Policies are a stain in America’s history, and it’s long overdue that the federal government reckon with this history and its legacy,” Warren said in a statement. “These policies and practices caused unimaginable suffering and trauma for survivors, victims and the thousands of Native families who remain impacted by them.”

Davids said the nation “must do better to acknowledge its legacy and understand the full truth of these polices.”

Cole said the commission “will provide an important step toward resolving and healing from one of our nation’s darkest periods.”

“We Are Still Here”

Across North America, Indigenous communities hosted prayers, candlelight vigils, walks and marches on Thursday, Sept. 30, in events stretching from Alaska to Massachusetts and throughout Canada, to honor the ancestors forced to attend boarding schools.

Known originally in Canada as Orange Shirt Day after the experiences of residential school survivor Phyliss Webstad, Northern Secwpemc, it was designated a national holiday by Parliament as a Day of Truth and Reconciliation in June after the unmarked graves of 215 children were discovered at the now-closed Kamloops Indian Residential School in Kamloops, British Columbia.

Sept. 30 is also celebrated as a Day of Remembrance in the United States, although it has not been designated a holiday.

In Bismarck, North Dakota, people joined in a spirit walk to the state Capitol building that featured a riderless horse “in honor of the children who never made it home,” according to a statement released by organizers of Orange Shirt Day North Dakota.

“We are still here,” said Swan AmericanHorse, Standing Rock, who organized a morning run in Bismarck, according to the statement. “We have to be a voice for the children who were silenced so many years ago.”

In Fairway, Kansas, the Shawnee Tribe commemorated the day at the Shawnee Indian Mission, where the tribe has announced it is working to bring in ground-penetrating radar to search for remains at the site. The tribe also is reviewing restoration of the mission.

“For far too long, the truth about Indian boarding schools has been absent from national conversations,” Chief Ben Barnes said in remarks at the Shawnee Mission. “Others may have forgotten, but America’s tribal nations have not. Survivors’ stories have been handed down from generation to generation, and the stories of those who did not survive are coming to light.”

In downtown Niagara Falls, New York, the Seneca Gaming Commission sponsored an Every Child Matters Walk to bring “greater understanding, awareness and healing to the atrocities faced by generations of Indigenous children at residential schools across the United States and Canada.”

Niagara Falls and the Seneca Niagara Resort & Casino were illuminated in orange, and the walkers carried orange glow sticks and wore orange wrist bands. The Seneca Nation also held a walk for tribal members on the Cattaraugus Territory in Irving, where the Thomas Indian School operated from 1855-1956, and events were held in the Seneca Nation’s Allegany Territory in Salamanca.

In Canada, hundreds of people gathered at Parliament Hill in Ottawa.

“Know the history of this day and the corruption it was built upon,” Wakerakatste Louise McDonald Herne, a condoled Bear Clan Mother for the Mohawk Nation Council, told the crowd, according to CBC television. “You need to correct the wrongs and you have to own your own truth.”

The remains of more than 1,000 children have been found at former residential school sites in Canada, and the search continues for more. In the U.S., searches are underway now to find remains in unmarked graves and to locate the families of those who died but never returned home.

In Brandon, Manitoba, Canada, a week-long celebration of truth and reconciliation included a walk from the Riverbank Discovery Center to the Brandon Indian Residential School site.

Elders and community coordinators headed by the Brandon Urban Aboriginal Peoples Council have sponsored the walk on Orange Shirt Day for several years, although it was not held last year because of COVID-19.

Walking in a sea of orange, Florence Halcrow, the Ask Auntie coordinator for the Brandon Neighbourhood Renewal Corp., said the number of people who turned out to support the survivors and honor those who died was overwhelming.

“It’s also been very emotional, as this week is helping people heal,” she said. “We are very grateful for everyone who has come out.”

Other walkers noted the impact the events can have on the participants, with some learning only this week that Brandon had its own residential school.

“This is our first year walking and it’s been an eye-opening experience,” said Alyssa Alanbra and Kathleen Servidad. “It’s very powerful to see this many people all wearing orange and it definitely gives us the opportunity to reflect about what this day means.”

The events will end with a large feast and closing ceremonies led by Elder Frank Tacan on Friday, Oct. 1.

The re-introduction of the bill in Congress to establish a U.S. commission provided a boost to those participating in orange shirt events.

The original bill was filed last year by then-Rep. Deb Haaland, Laguna Pueblo, D-Colorado, who is now secretary of the Department of Interior — the first Indigenous person to hold a cabinet position.

The new bill would create a formal commission to “investigate, document, and acknowledge past injustices” of the federal government’s Indian boarding school policies, including human rights violations and efforts to extinguish Native cultures, religions, and languages, according to a statement from Warren’s office.

“His whole life he wanted our story to be told,” she told Indian Country Today. “Our story has not been told. Most people in this country or internationally do not comprehend the violence, the atrocities, or the hurt, the devastation, that the government and churches committed against Native American children and their families.

“In light of the death of my life partner Myron Dewey, the light we have is as survivors,” she said. “We will take our rightful voice back. We can’t do this alone, We need to put down the anger, put down the hurt and heal.

“We want peace, we want truth,” she said. “Families need justice. We want to be empowered.”

Christine Diindiisi McCleave, Turtle Mountain Anishinaabe, the chief executive of the boarding school coalition, said the Canadian commission has led to additional resources from the government for survivors of residential schools, including a national hotline and additional spending on mental health, culture and emotional services to address boarding school trauma.

“We believe that healing will need to be community-led and tribal nations should be at the forefront of determining what mental, spiritual and physical supports their citizens will need as this truth-telling process unfolds,” Diindiisi McCleave said.

Buffalo said the bill has come after years of work by those fighting for their ancestors.

“It is a result of decades of advocacy within the movement,” she said. “We have to keep moving forward.

Dannielle Morrisseau, a citizen of the Metis Nation, contributed to this article from Brandon, Manitoba, Canada.