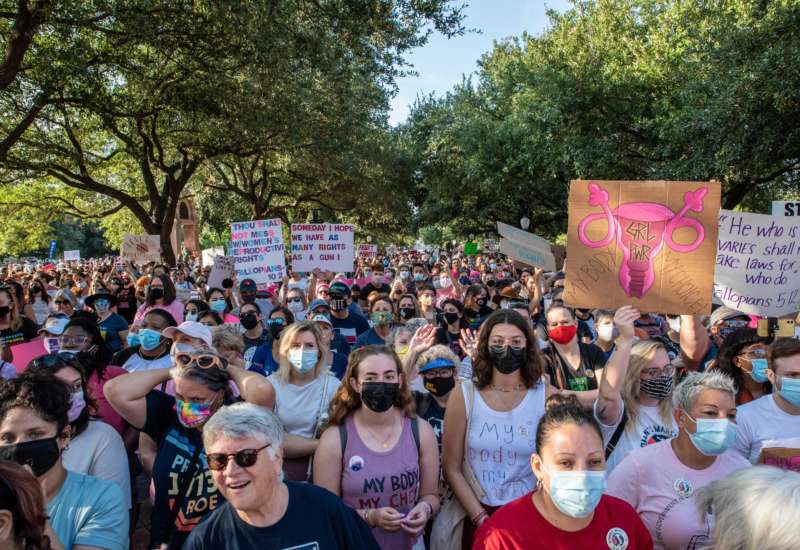 As state-level attacks on abortion rights intensify — not only in Texas but also in at least seven GOP-controlled states that are seeking to copy its draconian abortion ban — local abortion funds like the Texas-based Lilith Fund are serving as a locus of resistance.

These local abortion funds pair direct service (providing the resources to enable people to access an abortion) with an organizing effort to defend and expand access to abortion through collective action and consciousness raising. Erika Galindo, the Lilith Fund’s organizing program manager, spoke with Truthout about some of the reasons why organizing beyond service provision is important, as well as what is really necessary and at stake in the fight to preserve Roe.

As a Texas-based organization, the Lilith Fund is on the front lines of the fight to protect abortion rights in the U.S., contending with the state’s regressive new anti-abortion law that is part pre-viability ban and part vigilante justice.

The law, S.B. 8, prohibits free exercise to what should be an ordinary health care decision. Banning abortion after six weeks of pregnancy and providing a private cause of action for individuals to sue people who defy the law, S.B. 8 is an affront to the very spirit of Roe v. Wade. And yet the Supreme Court refused to stop the law from going into effect, claiming it was merely a procedural determination.

Galindo argues that even as we fight to defend Roe v. Wade from right-wing attacks, it shouldn’t be seen as an adequate standard for abortion access. Speaking in concert with a growing chorus of organizers of color across the country, she argues that beyond extreme six-week bans, many other restrictions prevent many people from accessing abortion — for example, restrictions involving multi-day visits before a procedure, prohibitions on using public funding or insurance for procedures, or even the various targeted restrictions on abortion providers (TRAP) laws. Despite the historic House vote protecting women’s health expressly prohibiting unnecessary restrictions on abortion access like S.B. 8, organizers like Galindo aren’t waiting for federal intervention.

Anoa Changa: How does the Lilith Fund engage in organizing, beyond the service of covering the costs of abortion for people?

Erika Galindo: We really think our work is like a two-pronged approach. There’s a direct service part, which is just like getting people to their abortions when you truly can’t afford them. But then there’s the organizing part because we know that, for one, there’s a lot of abortion policy being made right now, but hardly ever with people who’ve had abortions in the room, like an advocacy space, and just like spaces where these decisions are being made. And so, I think the idea was to get people who call our fund directly involved in the organizing to defend and expand abortion access.

We also know that because a lot of the funds that make up our hotline budget is through grassroots support. That is organizing when people are fundraising amongst their communities, and they’re talking to their friends about why it is that they are supporting the fund or why they support abortion funds. That in itself is like an educational moment.

Can you talk to me a little more about why looking at abortion as health care instead of some philosophically debated procedure is the better framing?

Yeah. Abortion is health care. Because, quite frankly, anything that you need to go see a doctor for is immediately health care. People need abortions, yes, because they don’t want to be pregnant anymore. But that can be for a plethora of reasons. And pregnancy itself is not just a super casual thing. It’s like the most dangerous thing that somebody can do. And I think we forget that. But in Texas, especially, it’s really dangerous for women — particularly Black women — to be pregnant, unfortunately, because we don’t have a health care system that isn’t anti-racist yet or fully just not without the biases or ills of the world.

Local abortion funds pair direct service (providing the resources to enable people to access an abortion) with an organizing effort to defend and expand access to abortion.

What I mean when I say that abortion is health care is [that it is] a common procedure; it is safer than some dental procedures. People should be able to access it without having to pay out of pocket. And in Texas, you currently have to pay out of pocket for your abortion, because there’s not even private coverage for it. We do believe that all health care should be accessible to everyone. And that includes abortion.

It sounds like what you’re saying is we should be providing total coverage for the health care needs that people have, whether they’re choosing to have a baby or choosing to have an abortion whatever the case may be.

Much of the focus nationally has been on saving Roe. Is saving Roe enough to protect abortion access and rights for pregnant people in the communities y’all serve or in other parts of the country?

Roe has never guaranteed that there will be public coverage for abortion, and even in the two years after Roe, there were already attacks through the Hyde Amendment. Roe is like the baseline. It’s the floor, not the ceiling as a lot of people have described it, because it’s like the bare minimum that our country can do. But we need a whole lot more. Roe assumes that there’s a lot of things already functioning well. And there’s not, unfortunately. It’s operating obviously within capitalism.

When Roe was passed, it was focusing more on a doctor’s right to provide abortions, and that’s assuming that someone can get in front of a doctor, but that’s a huge assumption to make. Especially because health care is also just generally not accessible or a right in this country (or cheap). And because TRAP laws and coverage restrictions have only eroded Roe, it means that it has only gotten harder, because people have to pay out of pocket, take more time off work, find child care, etc.
We need budgets that support people getting health care, including abortion.

What would you like people to understand about what’s actually happening in Texas and the work that people are doing?

Even if your state doesn’t have harmful abortion restrictions, folks might still be struggling to pay for their care.

I think people in Texas right now are being held hostage. And I say that because Texas is not a red state. Texas is a state that has so many things that are working against regular Texans — like gerrymandering, voter suppression, just like all sorts of things. Then I keep thinking about the fact that this extreme abortion ban was passed in a year where Texans were so bogged down and distracted. We had the winter storm happen. COVID is still happening. Our legislators made no effort to make the legislature accessible and pandemic-safe.

The legislature has never been accessible. But they really took advantage of the fact that people really can’t travel and go and drop things at a moment’s notice to go to a building where masks are not required. And try to intervene in this process. We had the cards stacked against us from the beginning. I think I just get very frustrated when people tend to write Texas off or the South off as like, a lost cause.

Texans do not want abortion restrictions. Texans wanted COVID relief and our legislators to fix the grid. That hasn’t happened. And we know that attacking abortion, attacking trans kids … it’s because they don’t want to give Texans or the South the legislation that could actually benefit us.

Is there anything else that you think is important for people to know?

I feel like if folks want to help Texas or get in coordination with Texas, I think folks need to of course donate to a fund and figure out how you can volunteer. But I think also getting involved in your own locality is super important.

Because even if you feel like maybe your state is in a better position, it could very easily not be. Also, even if your state doesn’t have harmful abortion restrictions, folks might still be struggling to pay for their care. So, I would encourage anybody to get involved with their local abortion fund and look to whoever’s been doing this work in your area because they will likely have so much expertise and can tell you exactly where you need to go to fight abortion restrictions.

This interview has been edited lightly for clarity.

Your Kids Are No Longer Safe…