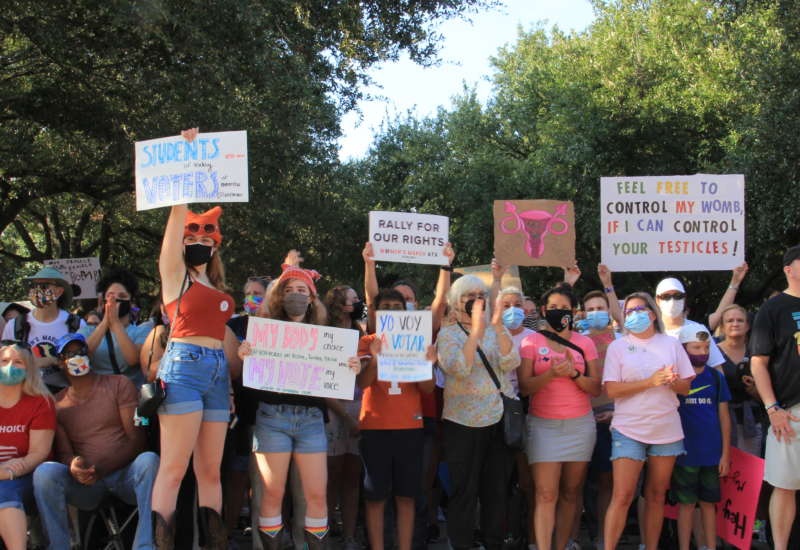 Austin, Texas—Hundreds protested Texas’s new six-week abortion ban, rallying on the south lawn of the State Capitol Saturday as part of nationwide demonstrations for abortion justice. Organized by the Women’s March and more than 90 partnering organizations, including the National Latina Institute for Reproductive Justice, Planned Parenthood and SisterSong, the actions spread across 610 cities in all 50 states and Washington, D.C.

Texas leaders in the fight for reproductive rights anchored marches in Austin and in Brownsville in South Texas, joining hundreds of thousands of marchers across the country and in the nation’s capital in D.C., to pressure the U.S. Senate to urgently pass House-approved legislation that would ensure the right to abortion under federal law, and separately, to protect the right to vote, abolish the filibuster and expand the Supreme Court.

In Austin, Democratic state lawmakers linked their fight against voter suppression to the fight against the state’s Senate Bill 8 (SB 8). The new law bans abortion after six weeks by empowering private individuals to file civil lawsuits seeking up to $10,000 against abortion providers and anyone who “aids and abets” in the procedure — an enforcement mechanism reproductive rights advocates have criticized as a form of legalized bounty hunting.

State representatives including Jasmine Crockett, Donna Howard and others told the crowd in Austin about their work testifying in D.C. before the Senate Judiciary Committee about SB 8 last week. They connected state lawmakers’ struggle against the state’s voter suppression bill, in which Texas Democrats fled the state for D.C. in order to break a legislative quorum in July, to the fight against SB 8.

“We’re in the middle of redistricting right now. You know what [the Texas GOP] want to do? They want to further limit your voice,” State Rep. Jasmine Crockett told hundreds of protesters Saturday at the State Capitol. “The Texas Democrats went to D.C. because … we wanted to make sure that everyone in this state had equal access to the ballot box. They don’t want you to have access to the ballot box. They don’t want to make sure that you’re represented because they know that if you’re represented, stupid laws like [SB 8] would never be on the books.”

State troopers with the Texas Department of Public Safety protect a small anti-abortion counterprotest at the Texas State Capitol in Austin, Texas, on October 2, 2021, during Women’s March ATX.Candice Bernd

In Washington, D.C., thousands of marchers gathered at Freedom Plaza near the White House and marched to the Supreme Court, just two days before the start of the Court’s new term, which is set to decide the future of abortion rights in the U.S. as the Donald Trump-appointed conservative majority takes up a Mississippi challenge to the landmark 1973 Roe v. Wade in December.

“We’re going to keep giving [the fight] to Texas,” Marsha Jones of the Afiya Center for Black women’s health care in Dallas, pledged to the Washington crowd. “You can no longer tell us what to do with our bodies!”

On Friday, the Biden administration urged a federal judge to block SB 8. District Judge Robert Pitman heard arguments from Justice Department lawyers and the Texas attorney general’s office for nearly three hours on Friday but did not say when he would rule. The case is just one of a series of cases, including the Mississippi case, that presents the Supreme Court with the opportunity to uphold or overrule Roe.

“They know that if you’re represented, stupid laws like [SB 8] would never be on the books.”

A separate challenge to SB 8 is back on the high court’s docket after a broad coalition of Texas abortion providers led by Whole Woman’s Health again asked the court to intervene. In an attempt to expedite the case, plaintiffs asked the court to hear the defendants’ motions to dismiss, which were denied by the district court and then appealed to the Fifth Circuit Court of Appeals, where they remain pending.

Additionally, a Texas state court has blocked lawsuits against Planned Parenthood clinics, temporarily protecting the providers from enforcement of SB 8. So far, one Texas abortion provider, Dr. Alan Braid, who claims to have provided an abortion after six weeks, has been sued by two people from outside the state in a deliberate attempt to test the new law in Texas courts.

The weekend’s demonstrations also come on the heels of powerful personal testimony by congresswomen, including progressive Representatives Cori Bush, Pramila Jayapal and Barbara Lee, at a Thursday House Oversight Committee hearing on protecting abortion access. The women told emotional stories of their own experiences obtaining abortion after rape, contraceptive failure and during the ‘60s before Roe.

“When I found out that I was pregnant it was very difficult because I still didn’t understand what was happening,” Bush told members of Congress of her pregnancy as a result of rape at just 17. “I just knew I wasn’t ready for a child.”

A protester wears a dress fashioned out of coat hangers at the Texas State Capitol in Austin, Texas, on October 2, 2021, during Women’s March ATX.Candice Bernd

Women’s March Executive Director Rachel O’Leary Carmona told Truthout in advance of Saturday’s events that fewer people overall traveled from across the country to be in D.C. than those who chose to stay and organize at home, in contrast to the Women’s March’s largest single-day protest after President Trump’s inauguration in 2017. Activists’ emphasis on organizing locally this year “is actually what we need in order to get the kind of momentum and infrastructure built across the country and for the long haul,” Carmona says.

Carmona, who recently relocated to Texas, echoed lawmakers and reproductive rights activists in the state in terms of centering the connection between issues of democracy, voting rights and reproductive justice. “So much of what we need to understand about Texas and also the South is the ways in which it has been gerrymandered and, in some ways, occupied by extremist, right-wing actors who are suppressing the will of the people either through refusing to let folks express that or through trying to suppress it once it has been expressed,” she told Truthout.

“So much of what we need to understand about Texas and also the South is the ways in which it has been gerrymandered and, in some ways, occupied by extremist, right-wing actors.”

The weekend’s marches and rallies build pressure on Congress to pass both the Women’s Health Protection Act (WHPA) and the Equal Access to Abortion Coverage in Health Insurance (EACH) Act. House Democrats passed the WHPA on September 24 in an effort to combat Texas’s SB 8 and in response to mounting fears that the Supreme Court will overturn Roe. WHPA faces an uphill battle in the evenly split Senate, due to center-right Democrats’ refusal to abolish the filibuster — something Women’s March organizers are also centering as a core demand.

Additionally, the EACH Act would nix the decades-old Hyde Amendment, which prohibits federal Medicaid funding for most abortions. Reproductive rights advocates say the amendment disproportionately harms low-income and communities of color, including immigrants and young people. Again, center-right Democrats are acting as the opposition, as Sen. Joe Manchin indicated last week that the Medicaid expansion Democrats are seeking as part of their $3.5 trillion reconciliation bill must include the Hyde Amendment to get his support.

According to Carmona, 85 percent of the marches organized across the country Saturday were organized by new activists and that pattern has been the same for every Women’s March. Hundreds of organizers have become activated by joining or getting involved with a Women’s March and have stayed active in the movement, even if they haven’t stayed active with the Women’s March organization itself.

“So when we say, ‘Well, one march doesn’t solve anything,’ I don’t think anybody has any illusions about that, but what it does is expands and consolidates our base and acts as an on-ramp for people to find their political home and kind of get in where they fit in and make a difference,” Carmona tells Truthout. “Then the net result of that, that we saw in 2018 in 2020, and I hope we’ll see in 2022, is a record number of women are running campaigns, and a record number of women are voting.”

Women’s March organizers are hoping that the women they activated Saturday will jump in and make a difference in multiple, interconnected struggles in order to push back against both voter suppression, minoritarian rule, racial injustice and restrictive abortion laws.

“For too long the issue of abortion and reproductive health care in general has been kind of thought of separately from democracy efforts or racial justice efforts or even justice around immigration.”

“For too long the issue of abortion and reproductive health care in general has been kind of thought of separately from democracy efforts or racial justice efforts or even justice around immigration, and what we’re seeing right now is a confluence and a very clear kind of point that all of those things are so interconnected that we cannot kind of have one without the other,” Carmona tells Truthout. “When we’re talking about the Women’s Protection Health Care Act, that’s really important for Congress to pass precisely because of the attacks against democracy that has netted us a politicized Supreme Court. So it’s very hard at this point to find the chicken or the egg, and that’s why all of these demands must be met.”

Republicans in Missouri, Florida and elsewhere are working to replicate Texas’s near-total abortion ban. This year alone, states have enacted more than 90 bills restricting or complicating access to abortion. Those bills join 33 newly enacted voter suppression laws in 19 states so far in 2021, according to a new tally from the Brennan Center for Justice. That’s why, in organizers’ view, it’s so important for those who marched and rallied on Saturday to stay in the fight for long term.

“We’re really proactive at sparking women’s civic imagination and helping women to see themselves in the future possibly playing a different role in our public space,” Carmona says. “It’s really about that long-term transformation and that happens inside of the organizing work that’s kind of the long tail of the march.”