McConnell Knows Debt Ceiling Must Rise, But He Wants Democrats to Pay for It 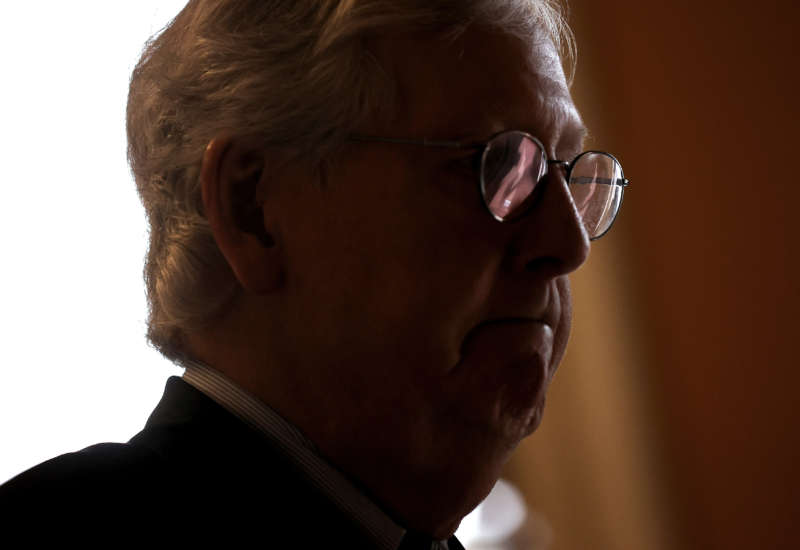 After months of posturing around the debt ceiling, Mitch McConnell backed off just enough last week to allow the Senate to raise the debt limit to keep the government funded through early December. It was, according to analysts and many Democratic politicians, a “win” for the Democrats, and a political loss for the GOP.

But McConnell was never playing to “win,” if winning was defined as blocking a debt ceiling increase. Quite the opposite: He was, and is, playing to raise the debt ceiling without dirtying his own party’s hands in the eyes of his base. It is a shockingly irresponsible maneuver and, at the same time, an act of insidious political skill, using the Democrats’ majority status as a cudgel against them designed to render them ever-more vulnerable in the 2022 and 2024 election cycles.

Political modeling currently suggests that the upcoming two election cycles could ultimately cost Democrats a catastrophic eight Senate seats. If that came to pass, it would solidify for a generation a situation in which Republicans lose the national vote by millions or even tens of millions of ballots yet lock into place a bulletproof Senate majority. And in McConnell’s calculus, that is more likely to come to pass if Democrats are forced to go solo in taking politically unpopular votes to increase the debt ceiling.

More than 60 years ago, Lyndon B. Johnson exercised such total control over his Senate majority that he came to be seen as the “master of the Senate,” in biographer Robert Caro’s unforgettable phrase. Johnson used his Senate majority, and then after he became president in 1963, his knowledge of how the institution functioned, to pass major social reforms. McConnell, by contrast, is using his iron grip over his caucus not to pass an ambitious legislative agenda, but rather to stymie and embarrass his opponents, and, of course, in the long run to win majorities and use those majorities to further lock into place conservative control over the judiciary. At the moment, lacking formal control over the Senate, he is a minority leader behaving as if he controls the entire institution, using the filibuster so aggressively that he is gumming up the basic functioning of government. And, to the eternal discredit of the politically mediocre Senate Majority Leader Chuck Schumer, the Democrats are letting him get away with it.

From the get-go of this current debt ceiling “crisis” — an artificial crisis ginned up entirely by the GOP as a way to embarrass the Biden administration — the Senate Republican leader was very clear: Since the U.S. government always spends significantly more than it receives in tax revenues each year, the amount of money the government was permitted to borrow had to be raised. The alternative, as McConnell knows all too well, was unthinkable — a national default, a collapse in the country’s credit rating, an inability to pay basic bills such as Social Security payments to the elderly, and the triggering of a global financial crisis and recession. Yet, McConnell continued, he wouldn’t lend a single Republican vote to the majority party to help them raise that limit; and not only that, he would support his members filibustering efforts to do so.

Each time he explained his stance, McConnell would then make sure to note that Democrats could bypass the filibuster simply by using a parliamentary sleight-of-hand that made increasing the debt ceiling part of the Democrats’ overall spending bill, thus allowing them to increase it with a simple numerical majority.

If all of this sounds arcane, that’s because it is. Senate rules are an exercise in obscurantism, designed to be understood only by a select group of initiates. But in essence, here’s what McConnell is saying: He wants the Democrats to own the increase in debt, despite the fact much of it was accrued during the tax-cutting and military-spending binges of the Bush and Trump eras. He wants the Democrats to be the only party that pays a political price for voting to jack up the national debt. And he wants it to be labeled an increase designed exclusively to fund Democratic social program priorities rather than to cover past obligations accrued to a large degree by two GOP presidents who both lost the popular vote and whose tax-cutting agenda wasn’t supported by the majority of the population.

For a generation now, since Newt Gingrich’s bomb-throwing tenure as house speaker, the debt ceiling has been a political football, with both parties at times withholding support for its increase as a way of trying either to secure movement on policies dear to them, or to stymie spending proposals that they oppose. Yet, until this current round of McConnell-maneuvering, neither party has threatened to filibuster efforts to increase the debt ceiling.

McConnell wants the Democrats to own the increase in debt, despite the fact much of it was accrued during the tax-cutting and military-spending binges of the Bush and Trump eras.

This is political opportunism taken to the most extraordinary degree, essentially holding the global economy hostage on the assumption that the Democrats will have to bite the bullet and raise the debt ceiling on their own — providing instant fodder for midterm political ads for the GOP, aimed at a base that has, for decades now, opposed increasing the debt ceiling.

Seen in that context, McConnell’s supposed climb-down was nothing of the sort. After pushing right to the brink of both a government shutdown and a national debt default, McConnell eased off the accelerator just enough to let government function until early December; but, all the while, he has maintained his position that the GOP won’t lend votes to a longer-term raising of the debt ceiling. What does this mean? It means that between now and December, critical weeks in which the Democrats need to be passing the vast bulk of their ambitious legislation on infrastructure spending, on climate change investments, on child care provisions, and, hopefully, on voting rights protections, a huge shadow — that of a potential debt default — will be thrown over the entire process. And it means that, come December, Democrats will, in all likelihood, still have to take a politically poisonous vote to increase the debt ceiling without any GOP buy-in.

This is the sort of ruthless power-play that Machiavelli would have understood all too well. It makes for great political theater, and plays well to a conservative base. But it also makes for both an increasingly toxic politics and an increasingly unstable economic environment. That’s a high price to pay for McConnell’s hypocrisy masterclass.