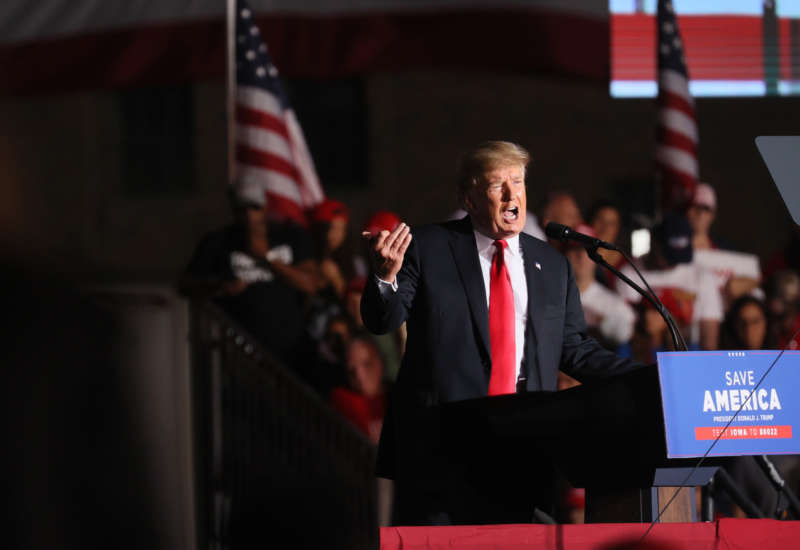 “If we don’t solve the Presidential Election Fraud of 2020 (which we have thoroughly and conclusively documented), Republicans will not be voting in ‘22 or ‘24,” Trump said in a post on his website Wednesday evening. “It is the single most important thing for Republicans to do.”

Trump’s statement is inaccurate — election fraud has not been “thoroughly and conclusively documented.” Indeed, dozens of challenges to the 2020 presidential election, filed by Trump and his allies, have been tossed out of courtrooms for lacking any evidence of widespread fraud affecting the outcome of the race.

Just this week, a Georgia judge dismissed a lawsuit from Trump supporters that sought to inspect 2020 election ballots, alleging that the existence of “pristine” votes — ballots where circles for candidates were perfectly filled in — justified a new investigation. But Superior Court Judge Brian Amero, who ruled the litigants didn’t have standing in the case, also noted that investigators have already concluded that such ballots simply do not exist, and that the ballots that have been counted were legitimate.

Trump’s continued promotion of “audits” of the 2020 election has been widely criticized, including by members of his own party, who have said that such claims could harm Republican efforts to win Congress in 2022 or even the White House in 2024.

Recent polling shows that the vast majority of voters in the U.S. believe President Joe Biden is the legitimate winner of the 2020 election.

“This could cost the Republicans the majority in the House in 2022,” said GOP pollster Frank Luntz, commenting in May during a New York Times podcast about how continued claims of fraud by Trump could hurt the party. “What Donald Trump is saying is actually telling people it’s not worth it to vote. Donald Trump single-handedly may cause people not to vote.”

Some in the party have openly blamed Trump for already suppressing the GOP vote, saying his claims of fraud in the run-up to Georgia senatorial elections in January may have helped Democrats.

“What we see is ultimately Republicans led by Trump, very willing to suppress their own vote by telling people the election could be stolen and therefore they may not even have to take part in it. That cost us the United States Senate and that’s something folks in the Senate are very mindful of,” Doug Heye, a former spokesperson for the Republican National Committee, said last month.

Traditionally, the political party of a new president fares poorly in the first midterm elections after they’re sworn in. That bodes well for Republicans, who hope history remains on their side in 2022. But polling at the moment indicates that a plurality of voters still want Democrats to remain in control of the legislative branch of government. Trump’s call for Republican voters to sit out next year’s races, even if it’s followed by just a small fraction of his base, could help Democrats defy the odds.

While Democrats might hope to see Trump cause his own political demise, the former president’s comments provide fuel for ongoing efforts to disenfranchise eligible voters in Republican-controlled areas. State legislatures across the country may act on them, as Trump has demanded, and impose more hurdles to voting than already exist in those areas.