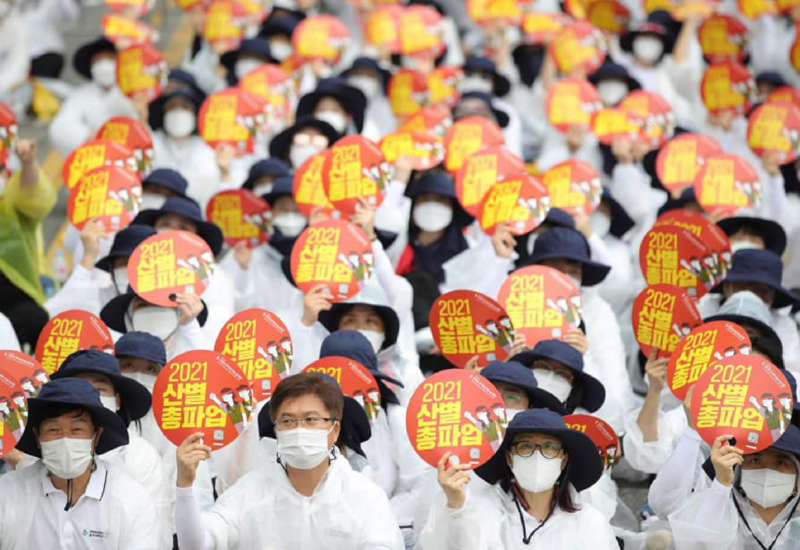 On October 20, at least half a million workers in South Korea — from across the construction, transportation, service and other sectors — will walk off their jobs in a one-day general strike. The strike will be followed by mass demonstrations in urban centers and rural farmlands, culminating in a national all-people’s mobilization in January 2022. The Korean Confederation of Trade Unions (KCTU), the country’s largest labor union umbrella with 1.1 million members, is organizing these mobilizations in a broad-based front with South Korea’s urban poor and farmers.

The 15 detailed demands of the strike can be summarized as fitting within three basic areas:

Abolish “irregular work” (part-time, temporary or contract labor with little or no benefits) and extend labor protections to all workers;
Give workers power in economic restructuring decisions during times of crisis;
Nationalize key industries and socialize basic services like education and housing

Today, South Korea ranks third in highest annual working hours and as of 2015 it was third in workplace deaths among member countries of the Organization for Economic Cooperation and Development (OECD). Over 40 percent of all workers are considered “irregular workers.” As in the U.S., many of these irregular workers labor in the gig economy, beholden to tech giants’ apps.

With an economy and society dominated by corporate conglomerates known as chaebol, South Korean people face increasingly bleak prospects. The top 10% of earners claimed 45% of total income in 2016, real estate speculation has led to a housing crisis, and privatization in education and health care are expanding disparities. As South Korea undergoes blowback from the effects of COVID-19 on the global economy, these crises have only sharpened.

Behind the shiny electronics and cars that chaebol like Samsung, Hyundai or LG are known for lie countless stories of exploitation. Earlier this year, cleaning staff for LG Twin Towers (the company’s skyscraper headquarters) camped outside the company building for 136 days in the coldest winter months to protest layoffs and exploitative workplace conditions. LG hired goons to pour water into the workers’ tents as they slept. One worker exclaimed, “What did we do wrong? Imagine this giant conglomerate comes and floods your bedroom. Can you sleep?!”

Exploitation and unsafe conditions are consistent across industries. Coal miners at Korea Coal, a government-owned coal mining corporation, are suffering health conditions from breathing in coal dust and overwork. One coal miner recounted the plight of irregular workers:“The government reduced the labor force by half, so our unit now has to do the job of two units. So everyone is ill. There’s no one here who is not sick. Our wages need to increase but have stayed the same. We work the same as regular workers, but we don’t even get half the pay.”

How We Got Here: Demystifying South Korea’s Rise

Often hailed as a “miracle on the Han river,” the story of economic development in South Korea has always had its winners and losers. Forty years of U.S.-backed right-wing dictatorships set the political conditions for the growth of South Korean industry. That story is for another time, but a general description still paints a chilling picture: participation in the Vietnam War, the separation of families and sale of children through the transnational adoption system, state management of a sex industry catered to occupying U.S. troops, and decades of martial law and anticommunist state terror all played their part in the rise of the chaebol. The confrontation between labor and capital brewing in South Korea today is another chapter in this bloody history.

South Korean workers have thrown down the gauntlet, and we should all pay close attention.

Since the Chun Doo-Hwan dictatorship in the 1980s, neoliberal reforms have gradually stripped away South Korea’s protectionist policies, opening its markets and resources to foreign investors at the expense of workers. By the mid-1990s, South Korea received a rush of $100 billion in foreign loans. When the 1997 Asian Financial Crisis hit, the economy quickly deflated as foreign capital withdrew. With national bankruptcy looming, South Korea was forced to turn to the International Monetary Fund (IMF) for assistance.

But the IMF loan came with strings attached: structural adjustment policiesdismantled hard-won worker protections, public corporations were privatized, and domestic markets were pried open for foreign capital, which returned to devour cheap Korean assets. By 2004, up to 44 percent of South Korea’s total stock market capitalization was owned by foreigners, mostly from the U.S., the E.U. and Japan.

The 1997 crisis and its aftermath ultimately led to mass layoffs, the “irregularization” of South Korean workers and the doubling of poverty rates in a single decade. Despite an ostensible democratic transition in the late 1980s, the South Korean people have no ownership of South Korea’s economy. The average household’s debts amount to almost double their annual income. Sixty-four chaebols claim 84 percent of the GDP, yet provide only 10 percent of jobs. In fact, the average South Korean has less say in government than U.S. corporations, which have power under the 2007 U.S.-Korea Free Trade Agreement to legally contest laws they find unfavorable.

Taking Back the Future: South Koreans on Strike

When half a million South Korean workers walk off their jobs tomorrow, they will demand the abolition of all forms of “irregular” work. They will also demand an end to loopholes in labor laws that permit employers to cheat their employees out of basic rights, such as the right to organize, access to benefits and compensation for work injuries.

In the face of the COVID-19 pandemic, the climate crisis and a new government effort to build a “digital” economy, workers are also demanding that future economic restructuring decisions be jointly determined by labor and management. Workers aren’t just demanding the government make changes for them; they’re fighting for more power to determine these changes themselves.

They’re also demanding their fair share. Perhaps the most eyebrow-raising demand by far is the push to nationalize troubled industries that have been laying off workers en masse — including the airline, automobile manufacturing and shipbuilding industries. After decades of austerity, the KCTU is challenging the state to take responsibility and guarantee housing, health care, elder care, child care and education for all. Its demands for social reforms include increasing public housing units from 5 percent to 50 percent of all available housing, making college-preparatory classes free for all, and for the state to hire at least a million care workers to ensure free elder care and child care for all families. “The government uses taxpayer money to bail out troubled companies,” says Lee Jeong-hee, the director of policy for KCTU. “It should play a greater role to guarantee fairness and protect the common people.”

As labor struggles rock Korea and the world this “Striketober,” opportunities arise to build towards an international class struggle to confront the international exploitation of workers. Everywhere, the working masses are making history, demanding a different future.

South Korean workers see COVID-19 as a turning point. This ongoing pandemic nearly halted the movement of people and created bottlenecks in the global supply chain — and workers worry how the economic effects of the climate crisis and digital transformation of industries could leave them on the losing end of a new economy.

“In times of crisis, the forces that successfully respond to the demands of the times will lead the new era,” says Lee. The KCTU’s demands exceed improving the conditions of its members — they are fighting for workers’ power as a class and demanding their share of the wealth they create. And for this, the workers expect to pay a heavy price. The South Korean state has already responded with preemptive repression, jailing KCTU President Yang Kyung-soo and at least 30 other union organizers, according to Lee. As strikers walk out of their jobs, Lee expects the government and companies to respond, as they have in the past, by jailing other union leaders and fining and suing workers for their activities.

South Korean workers have thrown down the gauntlet, and we should all pay close attention. While the dynamics at play in the KCTU strike are particular to Korea, the plight of precarious workers under the weight of neoliberalism is a global struggle. As labor struggles rock Korea and the world this “Striketober,” opportunities arise to build towards an international class struggle to confront the international exploitation of workers. Everywhere, the working masses are making history, demanding a different future.

U.S. observers must not treat the struggle in South Korea as a distant concern. The conditions South Korean workers face today are the consequence of more than 70 years of capitalist development in the shadow of U.S. military and financial hegemony. Given the United States’ imperialist position in the world economy, and its long and violent history in Korea, solidarity from U.S. workers is especially important. When we asked how to support KCTU from overseas, Lee asked us to spread the word. The international spotlight may protect some workers against retaliation by employers and the government and push the workers’ demands forward.