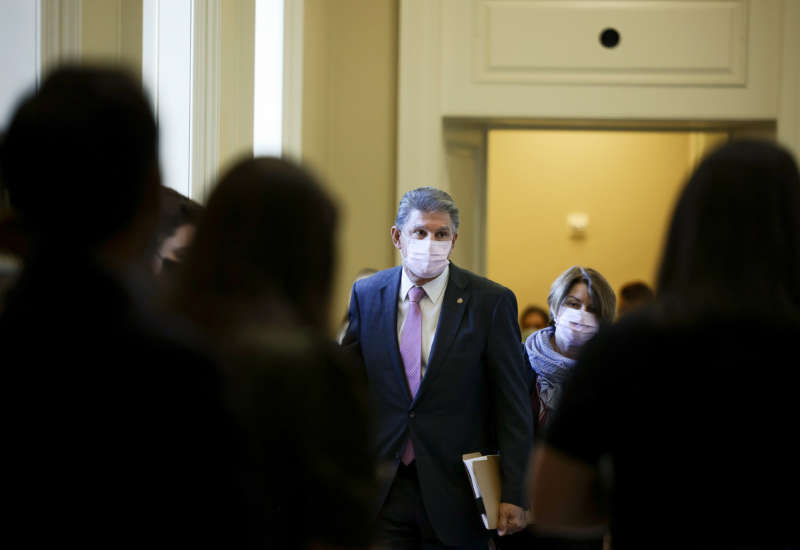 West Virginia Sen. Joe Manchin has spent the last months batting around his fellow Democrats like a cat toying with a mouse. President Biden’s signature Build Back Better Act has been the target of his torments — his energy industry paymasters hate it and want it destroyed, and so he has carried their water with dutiful ruthlessness — and today, the sham pretense of “negotiation” was dropped with an audible thud.

“In recent days,” reports Mother Jones, “Sen. Joe Manchin has told associates that he is considering leaving the Democratic Party if President Joe Biden and Democrats on Capitol Hill do not agree to his demand to cut the size of the social infrastructure bill from $3.5 trillion to $1.75 trillion, according to people who have heard Manchin discuss this. Manchin has said that if this were to happen, he would declare himself an ‘American Independent.’ And he has devised a detailed exit strategy for his departure.”

Such a move, if Manchin follows through, would immediately deliver Senate majority control to Mitch McConnell and the Republicans. Bernie Sanders would lose his Budget Committee chairmanship to Lindsey Graham, the current ranking Republican. The Build Back Better Act, along with Biden’s entire domestic agenda, would fall to ashes. This is the biggest club Manchin has, and he just audibly rattled it in the bag.

The road to this nauseating juncture has been torturous. “We’ve made breakthroughs,” an unnamed Democratic senator told reporters just yesterday, after a meeting between Joe Manchin and Bernie Sanders. The two diametrically opposed committee chairs had come together, according to The Hill, “to reach a deal on a path forward for President Biden’s economic agenda by the end of the week.”

Specifically, the pair sought to find a path to passage for the Build Back Better Act, a bill packed with climate and social policies that are anathema to Manchin’s corporate paymasters, and to his own personal coal-stained bottom line. This has been going on for months now, and what was a robust piece of legislation is now a shadow of itself, and under mortal threat thanks to Manchin’s threat.

It has been like this from the beginning. The same day Manchin had his “breakthrough” meeting with Sanders, he announced his opposition to the carbon tax, an idea being floated to salvage the bill after Manchin demanded the most effective climate elements be stripped. Biden’s staffers have been scrambling to fix the damage done by Manchin, and when they offered this solution, they got Manchin telling reporters, “The carbon tax is not on the board at all right now,” right before his sit-down with Bernie.

Are we sensing a pattern yet?

Three weeks ago, Manchin’s whole problem was the cost of the bill, yet he refused to publicly offer a number he could live with. When congressional progressives offered a solution to that concern — chop the time frame of the bill in half, which cuts its price tag in half — it suddenly seemed as if a way to daylight had been found…

…which was precisely when Manchin (perhaps realizing he was about to fail his paymasters) started blasting out specific complaints about the details. No clean energy impetus. No child tax credit (without worthless work requirements included). No carbon tax. Include the Hyde Amendment. Vote on the infrastructure bill first and alone.

Just yesterday, Biden informed House progressives that he was dumping tuition-free community college from the package, in order to try and please Manchin.

The problem all along has been simple: Nothing will please Manchin. He may have specific ideological complaints about elements of the bill, but that is not what motivates him. Clinging to a doomed home-state industry motivates him, which is perhaps the greatest tragedy of all. Nothing would do more good for West Virginia than a deliberate transition away from coal, even if it means subsidizing former coal workers until they get trained up for new work. That won’t happen this round because of Manchin.

More than this, I suspect, Manchin is motivated by a desire to protect his own personal coal-based wealth, and the wealth of the lobbyists who are in his ear even as they fill his wallet. He does not want a denuded bill. He wants no bill at all, and every time his fellow Democrats try to appease him by slicing up their own policy objectives, he moves the goal posts again. His threat to flee the party is a dramatic version of more of the same. If this were a football game, Democrats would be kicking field goals in the parking lot outside the stadium by now.

Hurricane Manchin, the worst climate-driven storm we have endured to date, is threatening to blow everything to the ground. It is not just the Build Back Better Act that is in peril; coal-state senators scuttling vital climate bills while the world drowns and burns is a dead-bang existential threat.

There is no bargaining with a storm like this, especially one whose effects will be felt globally. There are only two ways to handle such a storm: Either run away, or build up strong and dare it to knock you down. The Democrats have been running away for months. It’s time for a new tactic.

“The interminable delay of an up-or-down Senate vote on President Joe Biden’s agenda serves no one other than Sinema, Manchin, and their corporate donors who want the bill gutted or killed,” writes David Sirota for The Daily Poster. “Every day Senate Majority Leader Chuck Schumer stalls a vote on an already-scaled-back $3.5 trillion reconciliation bill, Senate Democrats become more complicit in the betrayal of their party’s campaign promises, the evisceration of the working class, and the destruction of the climate. They can make a different choice and hold a vote right now.”

Schedule a vote on the bill immediately, and announce there will be no further subtractions made. With the lid closed, Democrats can finally share concrete details about the bill with the public, and beat back the barrage of nonsense offered by the Republicans, and by Manchin. “And to really up the ante,” suggests Sirota, “Democratic leaders could add a bunch of programs that will target aid and investment to West Virginia and Arizona.”

Make Manchin and his crew defend themselves against that, make them explain their opposition to elderly dental care, child care, tuition-free schooling, cheaper prescription drugs, and the fact that the ocean is coming for us all, and maybe we should try to do something about it. Manchin has not been made to do this yet, and I would love to see him try.

…and if Manchin jumps, so be it. His decision to leave could come to amount to voluntary irrelevance. He was hardly there anyway, and his defection could rob the Republicans of basically everything they planned to run on next year. The whole tumbling mess would then be McConnell’s problem, and he could enjoy explaining it away while fighting off the slobbering machinations of Donald Trump, who would probably see a switch of party control in the Senate as a signal that his destiny is at hand.

Trump may go off like a burning fireworks factory, and the GOP may be forced to run with him or away from him. Either choice could tear the party apart and thoroughly horrify a stout majority of voters in the process. The 2022 midterms, if Manchin jumps, could very well be a bloodbath for Republicans entirely because of him.

Enough of this patty-cake bullshit. Call the vote.