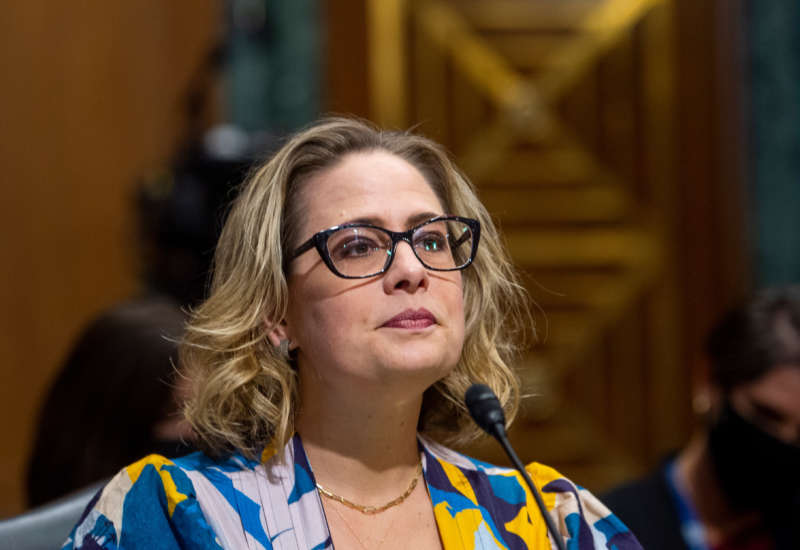 If an accurate history of the Build Back Better Act is written, the “process” of crafting that legislation will go down as one of the most shamelessly corrupt bag jobs in the annals of American politics… and friends, that is saying something.

At this juncture, even minke whales plying the frigid seas beneath the diminishing ice of Antarctica have heard about how Joe Manchin screwed them, and the rest of us, in the name of fossil fuel money. The lobbyists in Manchin’s ear have been about as subtle as a high-speed truck wreck on Main St. while going about their business.

If they could, these people would pay off Santa Claus to make him label more kids “bad” and get more coal into those stockings. Their market analysts would call it “Redefining Child Behavior: An Untapped Revenue Stream,” and someone would get a promotion for thinking outside the box.

Less scrutinized than Manchin, though equally culpable in this perfectly capitalist disaster, is Kyrsten Sinema of Arizona. While Manchin has been at the forefront of news coverage the way Donald Trump was in his vile heyday, Sinema has been altogether opaque. Refusing to enumerate or explain her “concerns” publicly, Sinema has brushed off all ten trillion press inquiries with the same response: The White House knows what I want.

The White House, meanwhile, is feeling all too ready to put Sinema in a corner and pretend she’s a coat tree. “A new strategy is emerging among Democrats at the White House and on Capitol Hill as they scramble to put together an agreement on the centerpiece of President Joe Biden’s legislative agenda, a multi-trillion dollar reconciliation package focused on new social spending programs,” reports Punchbowl News. “They want to isolate Sen. Kyrsten Sinema. After months of talks that have alternated between productive, maddening, fruitful and deadlocked, White House officials and Capitol Hill Democrats now believe it will be easier to find agreement with Sen. Joe Manchin than Sinema.”

It’s a damned hard day at the office when working with Manchin is the best available choice… and really, anyone in the Biden administration who believes one of them is better to deal with than the other needs to walk around the block and get some air. The pair have been working in tandem to destroy — not denude, pare down, narrow, shave or shrink: destroy — the Build Back Better Act from the very beginning, because that is what their paymasters seek, period, end of file. They may as well carry signs festooned with corporate logos every time they set foot in the Senate chamber: BROUGHT TO YOU BY…

The way Manchin and Sinema have gone about their obstructionism is the tell. Both of them are attacking the bill on ideological grounds, but it is no coincidence that their coordinated efforts have been laser-focused on virtually all the portions of the bill that are meant to pay for the bill. There is no better way to wreck this legislation than to gut the money meant to sustain it.

Sinema, joined by Manchin, is against raising taxes on the wealthy, which obliterates a major source of revenue for the bill. Sinema, flush with pharmaceutical industry donations, refuses to support reforming the way prescription medications are paid for, another major source of revenue for the bill. Reforming the IRS’s tax collection methods, yet another way to pay for the bill, is opposed by a number of conservative Democrats, rounding out the fiscal brick wall being erected to keep the legislation in the realm of another failed good idea.

Redline those three items, and Biden will have to fund this thing by selling lemonade at Metro stations for the next 30 billion years. This is not an accident or a coincidence. These are tactics, and they have worked brilliantly for the people paying Sinema and Manchin’s bills.

While Sinema may seem to be running through raindrops without getting wet, the splashback is beginning to accelerate. Five veteran members of her own Advisory Council quit their positions and went public with why on the pages of the New York Times: “You have become one of the principal obstacles to progress, answering to big donors rather than your own people,” they wrote. “We shouldn’t have to buy representation from you, and your failure to stand by your people and see their urgent needs is alarming.”

This is the point at which I am required to write, “It’s not over yet,” so I will: It’s not over yet. Rep. Alexandria Ocasio-Cortez is appealing to progressives to stand the gaff and not be disheartened by the barrage of corporate influence that has been unleashed.

It’s a damned hard day at the office when working with Manchin is the best available choice.

Ocasio-Cortez gave a speech Wednesday night warning that the corporate lobbyists “want you to give up before the deal is done, because it’s way easier for them to try to get away with the things that they’re lobbying for and against if people at home aren’t watching,”

And, as Common Dreams reports: “Ocasio-Cortez noted the ‘intense presence of corporate lobbyists throughout the process of reconciliation.’ This is why, she said, ‘that it’s just as important for people at home to be engaged in this process.’”

President Biden, for his part, has finally decided to jump into the negotiations with both feet after months of trying in vain to influence them by way of the Jedi Mind Trick. His effort may come to bring in some fence-sitting Democratic House members, but I doubt it will move Sinema very much.

Manchin, for his part, has already threatened to quit the Democratic Party entirely if he does not get his way in these negotiations, a clear shot across Biden’s bow from somewhere.

As for the Republicans, they hardly need to get out of bed for this fight. They are avidly watching two conservative Democrats rip the party apart and are united in their joy. Biden may as well be talking to the stump of Shel Silverstein’s Giving Tree: “Keep fouling everything up,” the tree told Sinema and Manchin. And they did… and the tree was happy.

Manchin is doing it for coal money, at least some of it his own. Sinema is doing it for pharmaceutical and medical industry donations. The former is doing it loud, the other softly and bewilderingly. Even Sinema’s long silence could be viewed as entirely tactical; it has surely deranged the process to the verge of collapse. The corruption they ooze while doing this is made of primary colors, vivid and impossible to miss.

They don’t want this bill to exist, will likely vote only for a version that has fewer actual teeth than the paper it is printed on, and that’s a big maybe. Perhaps, after voting for fire, flood, famine and greed, Sinema will take another bow on her way out the door, like she did when she voted against paying workers a living wage back in March. Nothing surprises anymore.